this is not shakespeare

Trading Places begins with music from "The Marriage of Figaro" played over scenes from around Philadelphia. Eventually, we get to Louis' townhouse, Coleman bringing him breakfast in bed on a silver tray. It's ten minutes before we meet Billy Ray, and then only briefly. The film gives us a whole city, then positions us squarely in the high-class part of it. Billy Ray's outburst, grabbing Mortimer's legs feels (deliberately) out of place in the film we've got so far.

When we are with him again a couple scenes later, he's over the top and it becomes clear that this film is going to play one of these things off the other. Even if we didn't know what the movie was going to be about, we'd know that the juxtaposition is deliberate.

The film offers brilliant details like Louis bragging about his Rochefoucauld watch--that it tells the time in Monte Carlo, Beverly Hills, London, Paris, Rome, and Gstaad. Except, through a screenwriting mistake or, I suspect, a deliberate measure at subtly picking at Louis' rich guy facade, four of those cities are in the same time zone. Louis' brag is not as big as it sounds.

It offers Ophelia, the prostitute who has saved $42,000 which she has in T-bills. Coleman, the butler who will turn on his boss after one phone call, and turn on the bigger bosses after... Actually, I'm not entirely sure that Coleman would have helped Louis if Billy Ray had not wanted to. Billy Ray is the classic fool, lifted up to prove that being the Lord (or the Lord's favorite son, as it were) is just a question of circumstance. (And, the conversation about the broken vase suggests that Louis lives in the luxury he does at least in part out of the generosity of the Duke brothers, and not necessarily his own income.) A modern-day The Prince and the Pauper coupled with a little Pygmalion (or at least the Three Stooges' take on Pygmalion--the 1935 short "Hoi Polloi". Trading Places sides quite readily with nurture over nature, The Dukes' "very important science experiment" suggests that circumstance can change a man quite quickly, that downtrodden men will revolt with violence or with calculated revenge, and those in power will have their comeuppance.

This is good storytelling, good filmmaking, and good comedy.

And, it amuses in a different way not, in the context of watching it for this childhood deconstruction because there I am all those years ago, seven years old, going to church every Saturday, having Bible class every weekday in school, and here's this film about horrible rich white men ruining people's lives, a poor black man, a prostitute, and a guy who gets drunk and pulls a gun on a crowd who team up to tear down The Man, or The Men on top. More of the rebellion that feels common in so many of these films from my childhood. The Powers That Be ain't all that.

And the backdrop of Christmas time and capitalism. That anyone might be surprised that I turned out the way I have is amazing.

Plus great advice from Coleman to Billy Ray on his first day working at Duke & Duke:

"Just be yourself sir. Whatever happens, they can't take that away from you." 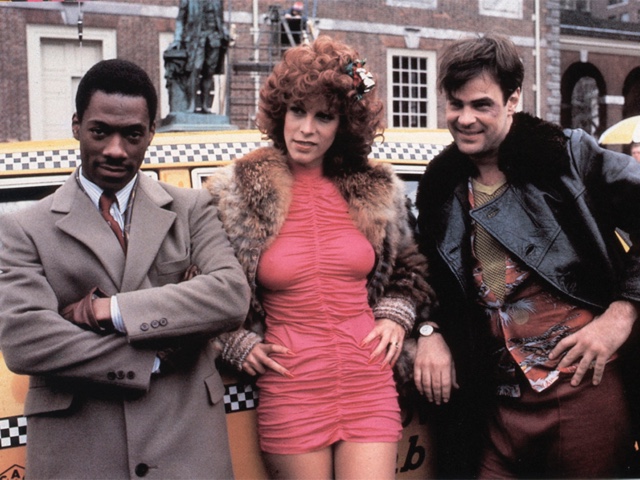