the only thing that i can’t buy

The parantheticals are making my point ahead of me. The voyage here is not hat exciting--there are not great stakes and the at the end of the film our heroes have not actually succeeded at what they set out to do (though Evie's father does tell O'Malley that Evie will inherit all of his formulas and patents, if not his company, if he is declared dead, so it's not all bad). 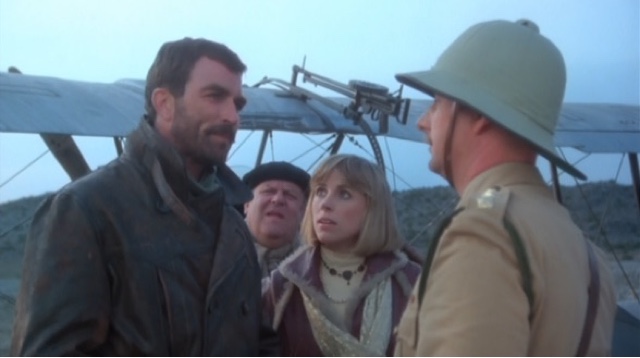 Instead, what we have is two people trapped in their own freedom, and they need something else. What I mean is, look at Evie and O'Malley at the start of this story. Evie, a flapper, dances and schmoozed with wild abandon. But she can only maintain this lifestyle because she has money, her father's money. Charlie tells her that she will lose it all if she cannot prove her father is alive in the next twelve days, and she gets desperate. Her freedom is just an illusion, bought and paid for by her father's company. Meanwhile, O'Malley is a drunk and a womanizer--Evie meets him right after a husband has knocked him out for being with his wife. He flies and makes his own way in the world, sure, but he is trapped himself in a stage of shell shock (what we now call PTSD). Like Phil Connor all those years ago (minus the combat experience, of course), O'Malley is trapped in what he probably thinks is a great life. Except for when he is entirely sober, probably. The ending of the film--the plot that is, not the love story--is cheap; O'Malley helps the locals in China fight off a warlord (or whatever) and, like John Rambo, refights battles lost long before. It is cheap, but it works. Evie also helps in that final battle, flying the one remaining plane as O'Malley sleeps in. It's cheap, and in the real world, someone like Evie might return to the nightclubs upon her return to Istanbul. But, we can believe, sort of, that Evie might have found something better in this life with O'Malley.

Like Phil with Rita--and I suppose I'm stuck on Groundhog Day right now because tomorrow is the 2nd and I will be watching it--we must wonder, will the relationship outlast the end of this time loop, this "high road". The title, and the exotic locations, evoke a Hollywood fantasy just as much as that Punxsutawney time loop. Like a 1920s adventure into the same territory as Eat, Pray, Love. Step outside your boundaries--in the real world--and maybe you get to step outside yourself, outside your problems, outside the boundaries you've built up inside yourself. Evie may seem free-spirited, but she needs her father's Monty and she misses her father, who she hasn't seen in three years. O'Malley runs a successful (enough) business and has his fun with other men's wives and with drink, but there isn't much depth there.

The tent scene at the British camp is vital to this film. Evie has gotten a one-on-one with the guy in charge but spends the time eyeing O'Malley and the boys. Meanwhile, O'Malley is telling the boys about Verdun being a slaughter, not a battle, he's deep in his cups, and deep in the darkness of his own war-ravaged soul. The scene ends when Evie confronts O'Malley about drinking too much, he calls her a rich bitch, and she walks away. (He sleeps off his drunk in his plane so they can leave first thing in the morning.)
Their next stop is the Waziri war camp where a young prince (?) offers to buy Evie. O'Malley may be working for money but he doesn't care about money. When, at the end, of the film, O'Malley tells Evie "I should have sold you when I had the chance", on the one hand, he is making a joke. He is attached to Evie, he wouldn't give her up for anything. On the other hand, yeah, he--the old O'Malley, stuck in his drink, stuck in his memories of battles lost--would have been "better off" if she had not come into his life at all. The hope of stepping out from under the cloud he's been living in is frightening. He doesn't know what tomorrow will bring. Before, tomorrow meant more drink, more flying, more women. But now, it is the undiscovered country, from who's bourn no traveler returns. O'Malley's time loop is over.

The point is: this flight across Asia serves the same dramatic purpose as a time loop, or even Dr. Ben Stone sentenced to time in Grady, South Carolina, Lightning McQueen sentenced to time in Radiator Springs, Andy the Squirrel... Except he ends up dead. Every character who learns to be better by being trapped. There's a remake of Overboard coming out soon; that fits the bull, for sure. And it's deliberate that Evie is named Evie and O'Malley's first name turns out to be Patrick. The first woman and a saint. Universalizing labels, names that evoke grander ideals and suggest that they could be anyone. Like so many fictional men called Jack or John--it's a placeholder for the rest of us. We might drink, we might dance, but what matters is the deeper self that we might be hiding under whatever pretense makes up our day. And how much we're avoiding it.

A few days away and I can appreciate High Road to China a bit more. You just have to realize that as much as it looks like it's trying to be plot-driven, High Road to China is a love story and a story about two people stuck in two very different ruts, figuring out how to get out of them together. At the start of the film, Evie seems to be going after her father just to secure the money she needs to live. When she tells O'Malley--when he asks for "one good reason I should take you along"--"He's my father", it feels like something real. We haven't necessarily seen the transition--a big flaw in the film--but Bess Armstrong plays it well.
Posted by robert e g black at 7:36 PM