narrow of purpose and wide of vision

I have to check old reviews of movies I'm watching from years ago because, having grown up with these things, it is impossible to be entirely objective. Like, I know Staying Alive is awful but I love it anyway. Krull, on the other hand, has gained a cult following even if it was initially a box office failure. 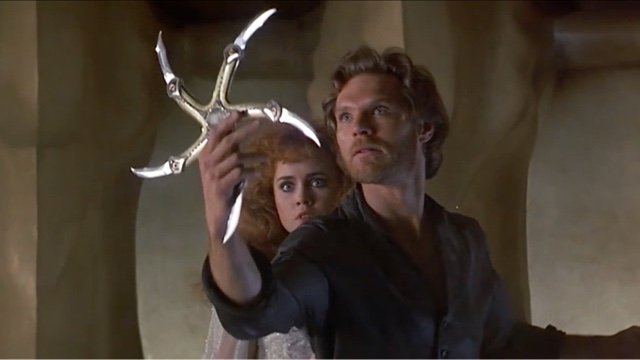 Siskel and Ebert gave the film two thumbs down and purportedly [the YouTube clip of their show is gone] called it "one of the most boring, nonsensical, illogical fantasies in a long time."

I like Lawrence Watt-Evans' description from Starlog--because it sounds like a defense I might make, arguing for the good regarding a detail that is obviously bad:

Krull is not a real place. Although we're told that the Slayers have been burning villages, we never see a village, burned or otherwise. We never see a farm; the White Castle is surrounded by scenic, empty landscape, not by the crowd of peasants who clustered around any real castle. Nobody ever appears on screen who isn't somehow connected to the story--

And, I must interrupt because the women who suddenly show up to hang out with Colwyn's adopted army of criminals are not connected to the story. The Beast uses one to try (again) to kill Colwyn, but that is opportunism borne out of these random women arriving out of nowhere. Additionally, when the men wrangle the fire mares, they all have saddles. Fairly basic saddles, but saddles nonetheless. So, I always assumed there were villages nearby. We just don't see them... Which actually ties right back into Watt-Evans' point--

the only extras are soldiers, Slayers, and so forth, never just a casual passerby or local inhabitant.

This isn't necessarily bad; after all, it's traditional for the heroes of fairy tales to be unbothered by such necessities as food and shelter.

Which is a legitimate critique of all films, not just "fairy tales" like Krull. Unless you've got an actor like, say, Brad Pitt in Moneyball, characters will not be seen eating unless it is tied to the plot. Bathrooms will not be seen or mentioned unless it is necessary (for comedic or dramatic purposes) to see one character on the toilet or fumbling with a medicine cabinet, or to separate one character from a group so the group can talk behind their backs with reasonable certainty that they have not been heard. Unless a film is a low-budget thing in need of filler for screen time, you will not see characters driving cars unless the drive is part of the plot. It will never be sunrise or sunset unless the plot asks for it; cinematic days go from full daylight to full night and back again. Villages can be burned offscreen as long as someone mentions it. The roads can be held by the Slayers as long as we get a sense of who and what the Slayers are, and we definitely get a sense of them. I mean, separate from the whole changeling attacks, the Beast has a masterful army in the Slayers; they are seemingly innumerable, they can emerge from swamp water as if they do not breathe (and maybe they don't), and while they are easily kill able, the little slimy things inside their heads often escape into the ground, suggesting some sort of immortality, that the "Slayers" are merely suits worn by the Beast's undying minions.

(Side note: Ynyr refers to the Beast more than once as the "leader" of the Slayers as if the Beast and the Slayers were two separate things that long ago joined together. This bit of implicit history intrigues me.)

Even further, Watt-Evans defends the lack of explanation for much of the magic and lore of Krull; "There are sets and wizards and other magical powers scattered about [and Rell, not just the Beast, comes from another planet], none of them explained," he writes, "they're just part of Krull... The fact that nobody explains gives the whole thing believability, helps one to accept that these people are real people, living in a real world." However, Bill Gibron, writing for Pop Matters in 2005, complains, "Krull's confusing mythology left many an intended audience member scratching their adolescent head." Gibron's bio lists him as age 44, though I'm not sure if that was his age when he wrote the Krull review or his age today. If he's 44 today, he was basically in the same pre-adolescent age bracket as me when Krull came out. But, he writes about the film as if he didn't see it, or he is deliberately trying to generalize rather than personalize.

(It should be noted that one reason I come back to Roger Ebert's reviews time and time again is that he personalizes; his reviews are his reviews. And, if this blog doesn't make it obvious, watch just about any of my YouTube reviews from when I was doing them; I take film personally. I aim for some objective measures, but I accept that every film exists for me in the context of every other film I have ever seen and in context of every other aspect of the life I have lived.)

In the hands of the prolific [director] Peter Yates (responsible for such '70s classics as Bullitt an Breaking Away) what should have been an epic entertainment stumbled under Lucas like expectations, poorly realized effects, and performances that seemed pitched just a tad too high for the relatively low brow material.

If you know me, you might assume I take issue with this line.

1) The easy one: Krull is an epic entertainment. This detail of Gibron's premise here relies on the what follows, and I disagree with all three points that follow. But, even before those details, I dispute the notion that in order to be "epic" a film must meet your expectations, as if there is not an objective definition of epic that is not readily met by a high fantasy world like Krull, with an alien (which is really just reskinned demonic) invasion, magic weapons, fantastic creatures, wizards, sword battles, laser spears, superfast horses, shape shifters, and, if nothing else, that fucking crystalline spider. Additionally, I don't think that just because an "epic" story stumbles--though I will below dispute that stumbling--means that it is not still epic.

2) Basing one's expectations on one film (or trilogy of films, as it were) is, of course, going to lead to disappointment. I was raised on Star Wars. Those films color every other film in some way, but--and here comes the blasphemy--they are not perfect films that should be your arbiter for all that is good in fantasy. Structurally, Krull matches the original Star Wars (and surpasses the episodic structure of Raiders of the Lost Ark, by the way) and suggests just as rich a world. Per Watt-Evans above, maybe if Krull offered us some regular people, or maybe the equivalent of Mos Eisley because really, Star Wars didn't offer much in the way of burned villages either.

3) Poorly realized effects? Watch the Seer's (John Welsh) two deaths and tell me the mix of practical and optical effects aren't impressive for 1983. Today, a visual like Ergo's transformations (when visualized on screen) may seem cheap and quaint, but the strange, stepped and blurred, changes are the way they are on purpose, to stand out from similar things in other films. Rell's singular eye and its ability to blink is also impressive, as is the full body animatronic suit that is the Beast; he breathes and his heart beats, and his features move. Some of the blue screen effects don't hold up all these years later, but watch, for example, the speeder bike chase from Return of the Jedi today and it has the same problem.

4) The pitched performances make this film. The casual pronouncements of philosophical notions add depth. Torquil (Alun Armstrong) proclaims: "Freedom? We have it. And fame? It's an empty purse. Count it, go broke. Eat it, go hungry. Seek it, go mad." And, I like this guy. He's an escaped convict, a man who is good at violence, but he is also a thinker. Or, how about Ynyr's "Death and power are close cousins"? Or this exchange between Ergo and Rell (and Titch (Graham McGrath)):

Titch: His name is Rell. He visits the Seer sometimes. He doesn't speak much.

Ergo: So I've noticed. Except to be sarcastic to people who wish to be friends.

Rell: Or jest with those who already are his friends.

Ergo: My name is no jest, beanpole. It's nice to have a short name when you're twenty feet tall, but small people need large names to give them weight.

Rell: Your actions give you weight, my friend. I saw you save the boy from a spear.

Ergo: That's what friends are supposed to do for each other.

And, I love both of these characters here. This magician who is desperate for friends even as he is quite unfriendly, and this cyclops who is marching knowingly to his own death to help these people save the world. Plus Titch, who just wants a puppy.

It's easy for me to imagine a world in which Krull got as much praise as Star Wars got, and maybe there were prequels a couple decades later, and we saw Ynyr and the older Lyssa when they were young. We saw the Beast arrive and villages burn. And, there was Ergo the Magnificent: A Krull Story and there's a Rell film in the pipeline. Or maybe this one, singular film is enough, because it opened a piece of my imagination all those years ago, and it has never been closed.