(Note to my future self: do not cite this entry if you end up doing your thesis on the currently being proposed topic; that would be cheating.)

First, let's get this out of the way. Yesterday as Groundhog Day played on my iPad, I was running the movie on the computer as well, skipping around to grab screencaps of the interiors of the Cherry Street Inn. Obviously, that is not the interior. That is the exterior as shot in Woodstock. The interiors, as I mentioned the other day, were in a warehouse in Cary, IL.

This is the side of the building (from Google Street View): 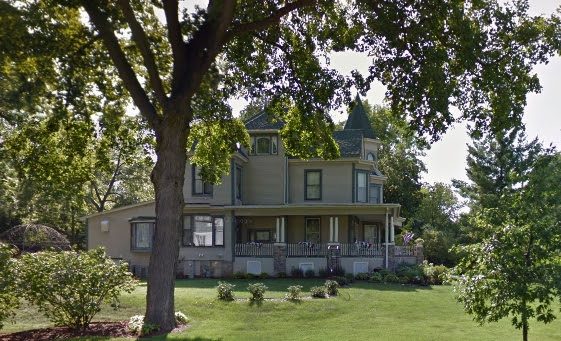 So, here's the thing I need to get out of the way: Phil's room is designed in such a way that it could not possibly be in this building as it actually exists. Here's my diagram again: 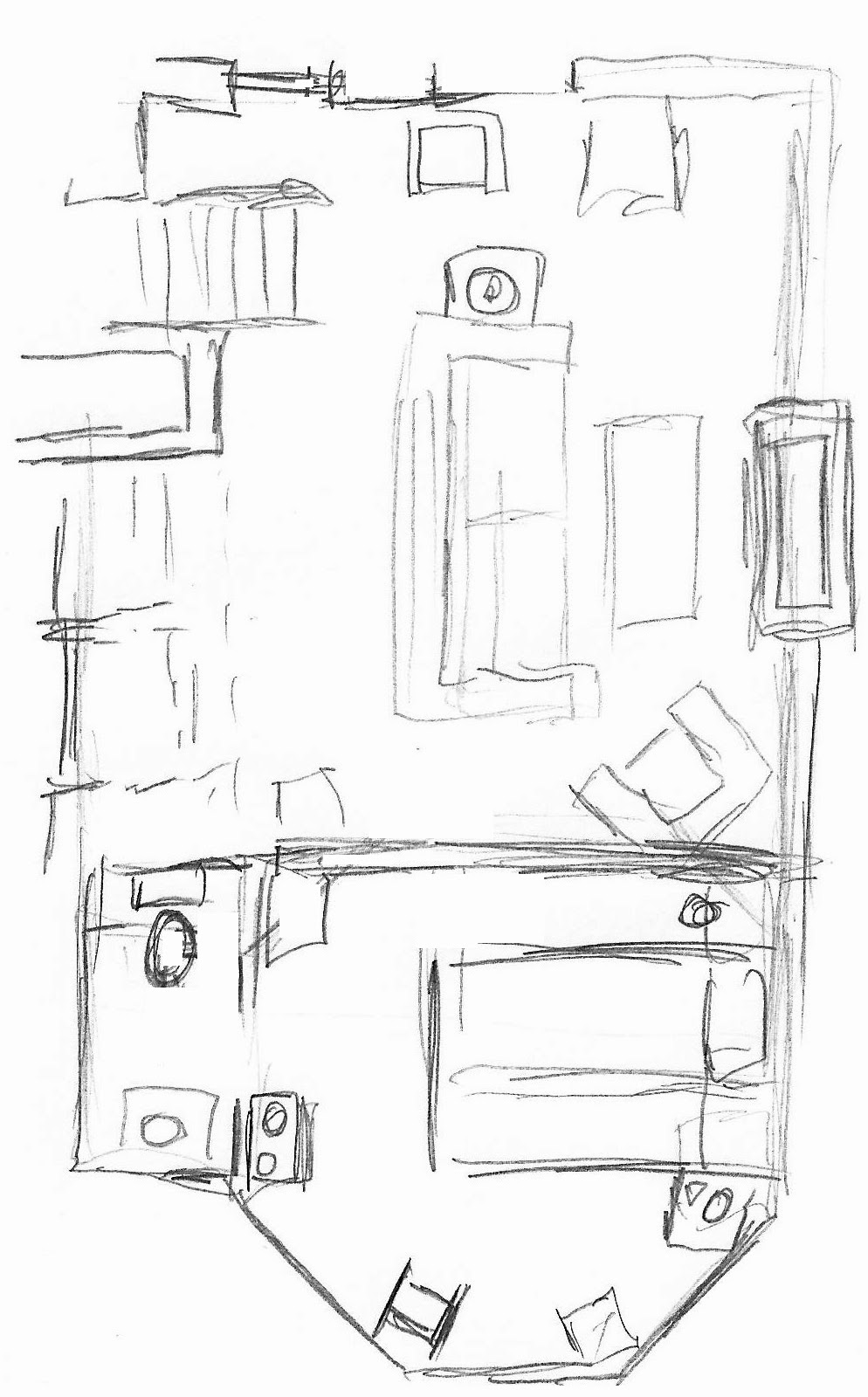 The stairs go down to the left there, which would be west since the three windows at the bottom of that diagram look south. Now, if Phil's room was where it should be, at the top right of the Cherry Street Inn as the exterior exists (i.e. the southeast corner of the third floor--

--those stairs would be heading out of the western side of the building, or they would have to have a very tight spiral, which doesn't match the straight railing or the bottom of the those stairs that we see when Phil meets Chubby Man. If--and that's a big if--those stairs do spiral tightly down, then they would come down in the right place to meet the landing so that Phil can turn down to the central hallway on the first floor.

But--and that's a big but--I don't think those stairs are supposed to be spiral at all. So, the stairs don't work. If Phil's room--nevermind the windows on the other two walls or that little half bath that can't be there--were where it is supposed to be on the "southeast" corner of the third floor, then his stairs would come down into the hallway on the second floor heading west, and he would continue down the next stairs also to the west, then turn north toward the front entrance which is on the south side of the building.

I think I have figured out what happened in regards to why Phil's room doesn't work--whoever designed the interior somehow got his or her hands on a shot like this: 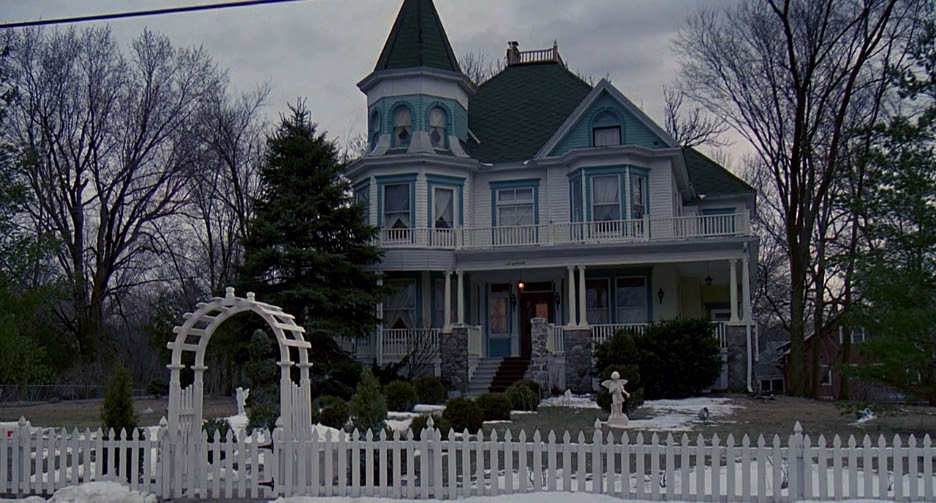 That's the exterior, but reversed. This would make it possible for Phil's room to have windows on the south side (that trio of windows), the west side (the window where he keeps his Rocky Road), and on the north side. And, it would explain why there are no windows on the east side of Phil's room, because presumably there is another room on the other side of that wall. Bonus: the POV shot of the street through Phil's window would now be at the correct angle as well.

Phil's stairs would only work with this setup if they had a tight spiral, which they do not seem to have.

A better question would be, why did I start this blog in the first place? What kind of a person am I that doing this for a year seemed like a reasonable thing to do?

In High School, my Meyers-Briggs results were INTP

(Nowadays, when I take the test, I tend to get INTJ. Also, recall, I took the test on Phil's behalf (twice) a while back.)

and the profile my teacher gave me--which I think I still have in a box in my closet--included this story about an INTP that got interested in some new topic, proceeded to cut out every news article he could find on that topic, studied all the details, learned everything he could, then got bored and moved on to something new.

Kind of like John Laroche (Chris Cooper) in one of my favorite movies, Adaptation.:

John Laroche: Then one morning, I woke up and said, Fuck fish. I renounce fish, I will never set foot in that ocean again. That's how much fuck fish. That was 17 years ago and I have never stuck so much as a toe in that ocean. And I love the ocean.
Susan Orlean: But why?
John Laroche: Done with fish.

I don't leave anything completely behind, though. I still toy with going back to my fictional town in the middle of the California Coast where I set several novels and numerous short stories, for example. But, lately, I have not had time for writing fiction. From time to time, I toy with trying to finish the comic book I started back in 2001--48 issues were outlined, 18 scripted, 2 drawn. But, I don't have time for that either.

(Sidenote: the INTP label, according to this profile, should have made me bored by the Groundhog Day Project long ago...

The INTP is above all a thinker and his inner (private) world is a place governed by a strong sense of logical structure. Every experience is to be rigorously analysed, the task of the INTP's mind is to fit each encountered idea or experience into a larger structure defined by logic. For here is the central goal of the INTP: to understand and seek truth. The experience of anything takes a back seat. The INTP is not interested in experiences themselves but is far more fascinated by concepts. The drive to understand things that are not yet understood is a very powerful force in the life of an INTP. ...the INTP will become quickly bored with anything that he has successfully analysed to the point of understanding it. Once understood, it has nothing left to offer, once the satisfaction which comes with achieving the goal of understanding diminishes. ... This is the real reason why INTPs are drawn to complexity: anything simple is too quickly understood and cannot hold the fascination for long.

Or maybe Groundhog Day just is not done with me yet, or vice versa, I suppose. As long as there are topics I can still write about in this blog, I will keep writing... well, until Day 365. After that, I need to get to work on my Master's Thesis, which, under the current proposal, will just come at this blog from a new angle.)

It would seem obsessing about things is in my personality. But, I wonder if there isn't something more than that... like the nurture to my nature

(If personality even comes from, you know, genes. I figure that personality comes, at least in part, from our genes. Like we inherit certain tendencies, certain traits. But, what we end up doing with those tendencies and traits is decided by upbringing and all of our interactions with, well, everyone we meet, everyone we read about or see in movies or on TV, everyone we imagine, all the things that happen to us... or don't happen to us. You can take that as determinism or just lump it all together and call it free will; I don't really care.)

that keeps me going the way I go. There's a certain conscious decisionmaking going on; that's for sure. I chose to go to grad school, and a lot of my studying has added detail to discussion here. I chose to start the Groundhog Day Project. The timing of that decision--well, there were a lot of factors that led to that, pending divorce, living alone, it was still summer break... this is why I don't think it would not be right to cite this entry in the future. My currently proposed thesis topic involves an autoethnographic look--

(That INTP profile linked above has this to say about my looking:

...the principle of detachment even encompasses how an INTP views himself. He may analyse his own thought processes as if his mind and body were separate from his conscious self. In wanting to understand his reactions to things, he may treat himself, even his own thoughts, as subjects for experiment.

The prospectus I am putting together now is basically just that--treating my self as the subject of, not an experiment, but a study, which is sort of the same thing.)

--at the construction of this blog and its role as a structuring force in my life when a lot of things were up in the air or had fallen apart. Aside from my usual tendency to obsess about things, I wonder if this project wasn't almost deliberately about me creating that structuring force explicitly to put some boundaries onto my life, to give me something I had to do every day, something that grounded me by, ironically, providing me a place to go crazy and rant and ramble about anything and everything that I want to... as long as I tie it back to Groundhog Day. Recall, my entry about how complicated that last day of the time loop must be for Phil Connors, tracking all the details, all the people he has gotten to know. All those people connect through Phil Connors, all of my blog entries here connect through Phil Connors and Groundhog Day. Hell, everything connects through Groundhog Day. What Would Phil Connors Do? indeed. 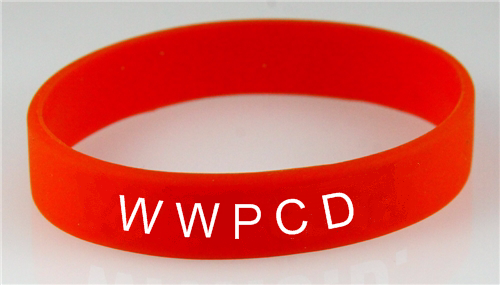 Phil is a measure of each and every one of us. At our worst, at our best, we are all just stuck in the time loop that is our life, trying to make the best of it. And, sometimes, we have to add some extra structure to keep things in line, to keep our sanity, to occupy the empty moments that might otherwise lend themselves to depression.

Today's reason to repeat a day forever: to always fill the empty moments... and to fill them in different ways with each resumption to test out all the hobbies that are possible.