it doesn't make any difference

I need Groundhog Day tonight. Tonight I'm definitely a "glass is half empty kind of guy."

But, that is secondary to something I just noticed: there is a piano at the bed and breakfast. When Phil does his little weatherman spiel for Mrs. Lancaster, you can see it in the background... and now that doesn't sound very important either.

Sometimes you just have to feel unimportant yourself as well, I suppose.

I actually had a pretty good day. Slept in, watched some TV, went grocery shopping, built with LEGO blocks and watched a couple British comedies while doing so. Then went to play cards at my sister's house. Got home and, well, I don't know. Cats are annoying--one just had surgery, another keeps hissing at him. Kids were going to watch a movie with me then both left before it even got going. And, I've been having some breathing issues today.

The piano discovery cheered me up for a moment. Then, I realized it didn't mean anything; even if we assume Phil might have practiced there, the film would have no reason to show it. If the film were going to show Phil doing anything else at the Cherry Street Inn, I'd rather it was the book calendar from Rubin's original screenplay. Only early on in the film, though. I think it weakens the "point" of the film if Phil is still tracking his days by the end. He should be well over that sort of thing just like he's over the adolescent tendencies.

And time passes. Picture the clouds moving quickly like the opening shot of this movie, even if Gilbey (2004) calls that "only slightly less clichéd than the peeling leaves of a calendar, or the swiftly rotating hands of a clock, in its evocation of the passing of time" (p. 24).

And I see the sweet vermouth and it seems a little too thin in color, watered down maybe. I google sweet vermouth to check--I bought a bottle of the stuff months ago, and I remember it being darker but I suppose, like wine, there could be different varietals. And, I found this: 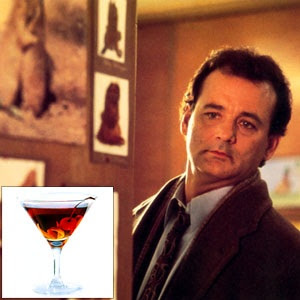 What grabbed my attention was not that a Groundhog Day shot showed up in the google results but that this shot... well, I don't know where it is from. It's Bill Murray, yeah, and he's wearing Phil Connors' clothes, sure, but the location... that many groundhogs on the wall--it's not film location I know. The wood paneling maybe fits the bowling alley but in the film we don't see much of the bowling alley--not even in the perfect game deleted scene. Or maybe... no, I got nothing. It's not Phil's room at the Cherry Street Inn; that has wood wainscoting, but flowered wallpaper higher up, and no groundhog decorations (rather, dogs). It's not the bar; its walls are painted brick. The wood almost matches that at the banquet-- 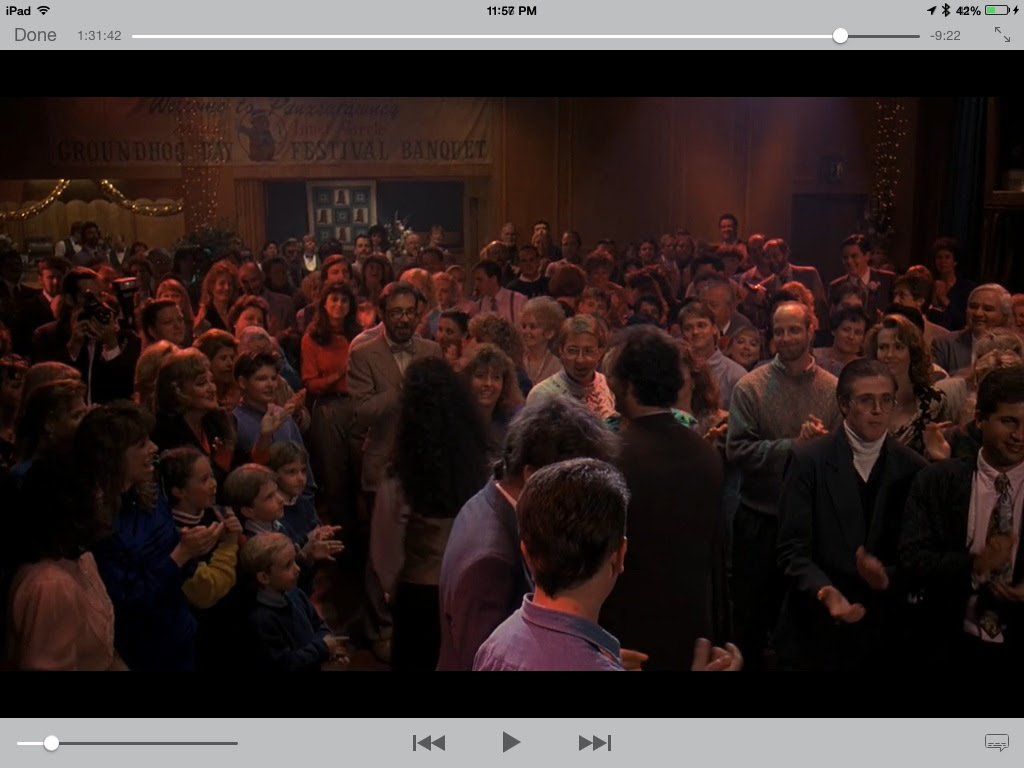 --but the banquet doesn't really have decorations like that. The official banners (and seal) and that quilt by the entrance. Otherwise, nothing.

It's a new mystery.

Another one is what the street sign in the background here says... 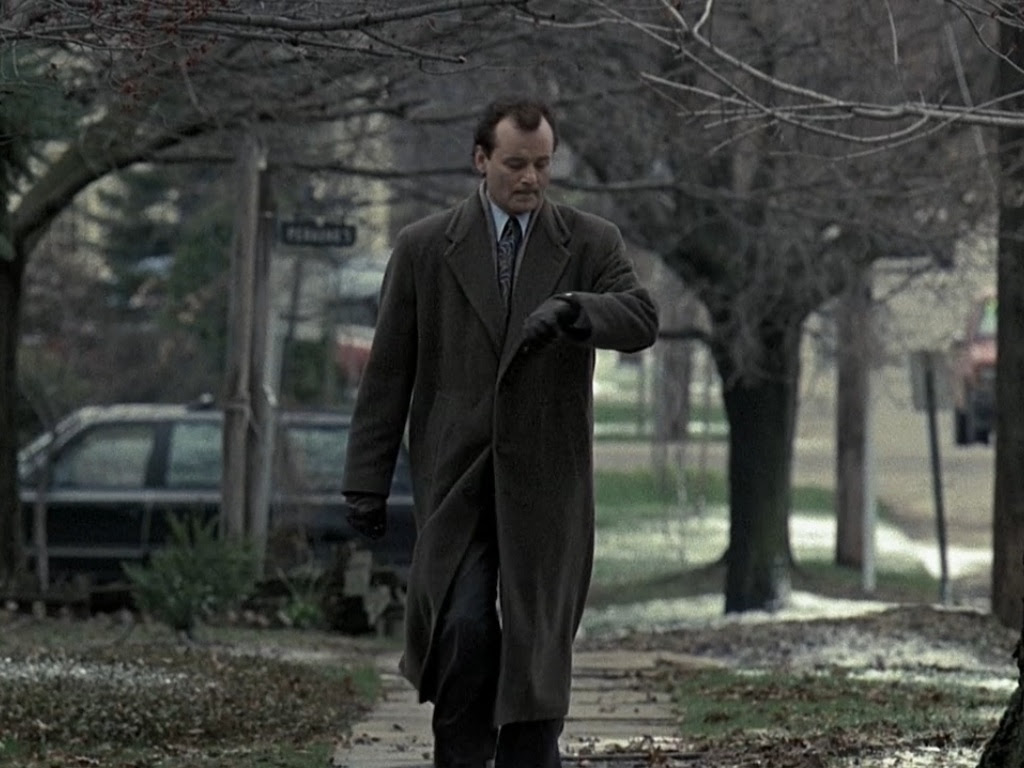 Or what this nurse's name is... 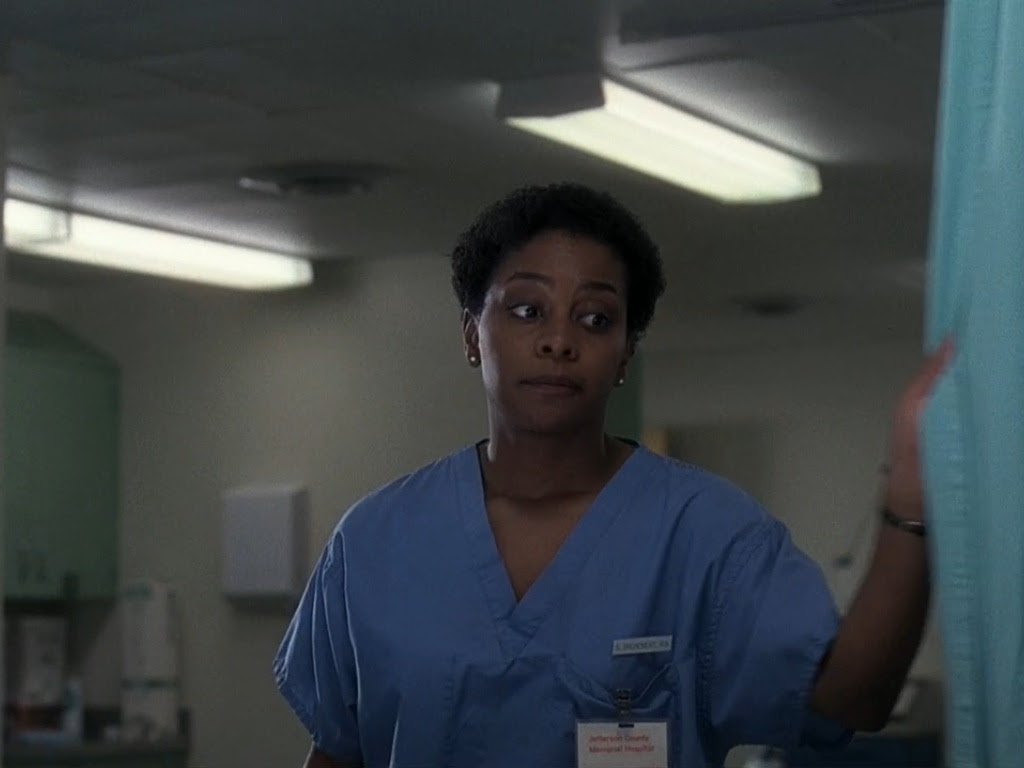 (Interesting aside: in getting that screencap just now, I noticed something new. I had previously noticed (but I did not go try to put it on the goofs page at IMDb because clearly they don't care for my edits from months ago) that the doctor and nurse that Phil and this nurse walk past into the "restricted area" are no longer there when the shot reverses angles. But, I only just noticed in that reverse angle that this is the exact same room in which we saw dead Phil earlier. Dead Phil occupied the very same bed that dead O'Reilly occupies here. Here's some evidence: 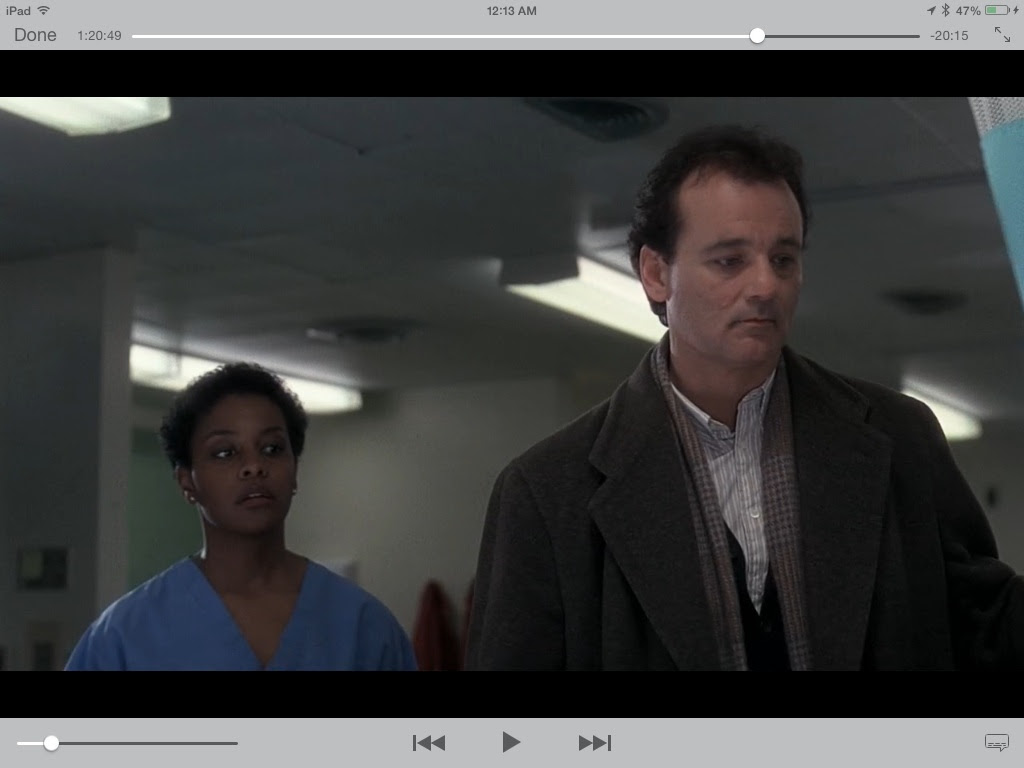 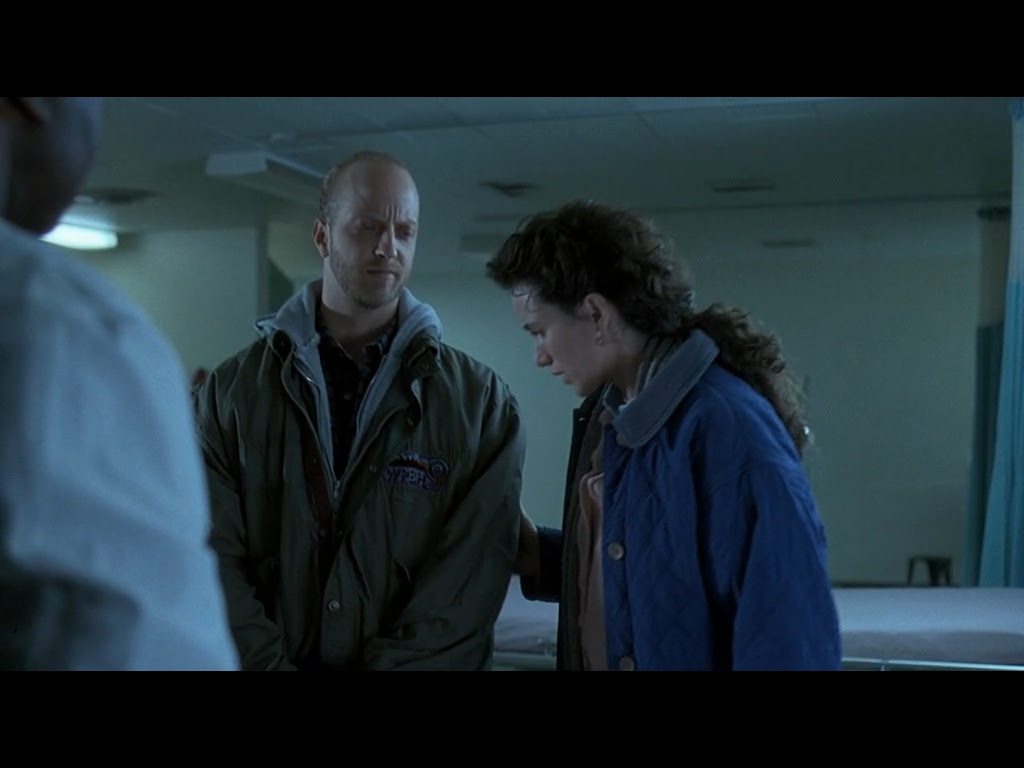 This makes for a potentially interesting detail, actually, considering other echoes within the film--Phil's mocking Larry eating to Phil stuffing food in his own mouth, Phil and Nancy to Larry and Nancy, the moving clouds to the still clouds, just to name a few. If Larry at the end is the successor to Phil's old way of life--as one might argue--then is O'Reilly perhaps a stand-in for future Phil?

Phil Connors, without the time loop, dies cold and alone, maybe a "wino" but maybe just homeless because no one likes him and no one will employ him because he's too abrasive. Sure, O'Reilly seems like a sweet old man, but maybe on the inside he's a sarcastic jerk like Phil. Or maybe he used to be. And, he only became something better after he'd taken his lifestyle too far and driven everyone away. And now he can barely get some change from the small-town locals, who should probably all be so familiar with him as to consider him like family--the film, and even more so Rubin's original script, makes Punxsutawney seem like an even smaller town than it is. I don't imagine there to be many homeless people there. If you've seen the deleted scene with the ambulance, you know that they recognize Old Jedson O'Reilly on sight. If they know him... well, I was going to say, if they know him, everyone around town should know him. But, that isn't strictly true. If O'Reilly really does have a problem with drinking, maybe he's in and out of the local ER, except that nurse just calls him "the old man." But, maybe she's new on the job. I don't know. I'll have to think about is some more.

Still, it seems meaningful that O'Reilly died in the same bed where Phil was before. And, it is the one place we see Phil dead, one of only two scenes he doesn't (arguably) experience. But, when O'Reilly is in that same spot, we do not see him. I really do think it makes for a poetic echo, O'Reilly for an alternate, future Phil. It adds another level to the lesson O'Reilly's death has for Phil. It isn't just about him realizing he cannot control everything. It is also one final lesson in what could have been, his Ghost of Groundhog Day Future... which makes me want to watch Scrooged.

It is late. I am tired. My mood has gotten a bit better just by watching Groundhog Day and finding something to write about. I will save this discussion for tomorrow, and I will watch Scrooged first.)

None of these mysteries is particularly important, but it bugs me when there are things about this movie I do not know. It occurred to me once--back in January I think--that I should memorize the closing credits, know all the names of cast and crew. On the one hand, I think that was a little much even for me. On the other hand, it does seem like a gap in my knowledge.

Today's reason to repeat a day forever: to have no gaps in my knowledge... about anything. We are talking forever here.