Before Phil's first line, Ned Ryerson (Stephen Tobolowsky) pops up from the bottom of the screen to tell us that in France, Groundhog Day was called Day Without End and in Brazil, it was called Black Hole of Love. Then he does an awkward Ned dance and disappears. This is how the "Needle Nose Ned Picture-in-Picture Track" bonus feature gets going. That's right, I'm on the blu-ray again finally after my previous blu-ray copy got laser-burned.

(I actually sampled the beginning of this commentary once just to see what it was, but I have neglected to get back to it until now.)

That first pop-up was torso only. Ned pops up full bodied for his next bit of info, pointing out the hilltop road that was the only bit in the film shot near the actual Punxsutawney. I hope this track is not just rehashing stuff from Ramis' commentary track.

The next one is torso again, just before the transition to Day One. Ned asks a trivia question, an easy one--the name of the TV station where Phil works ("WPBH 9")--and there's a little timer on the screen. These could be fun... except they will all probably be extremely easy.

For a moment, I thought Ned wouldn't pop up for his own scene, but then there he was in the corner, full body, telling us that Stephen Tobolowsky who plays Ned Ryerson was so obnoxious in his audition that he got the part on the spot. He says that can't be right then backs away off the side of the screen. It's a peculiar gimmick, Tobolowsky as Ned talking about Tobolowsky as Ned.

When they open the stump to get out Punxsutawney Phil, Ned comes, uh, miming like he's pulling himself into the screen via rope, to tell us that the animal handler for the film is the one grabbing the groundhog.

Day Two, just as Phil figures out the morning is the same, Ned creeps out onto the screen to tell us how Rubin's original started already in the time loop.

Adding even more weirdness to Ned Ryerson makes me less hesitant to write off the idea that Ned and Sandy Ryerson from Glee are related. I generally, write off the link because the two would have to be twins and there's no way Phil Connors would not remember the weird, clingy guy who dated his sister and had an identical twin just as weird. Hell, I'm wondering if the whistling belly button number wasn't a Ned and Sandy duet.

This might be a little too much Ned. But, on the other hand, I like the idea of in-character commentary.

Ned comes up again as Buster reads from the scroll on Day Two to tell us Bill Murray and Harold Ramis are honorary grand marshalls of the festivities in Punxsutawney "now." (I put now in quotation marks because this was recorded back in 2008. I'd guess it's a permanent sort of status, but I don't know for sure.)

Ned pops up during Ned's scene with another trivia question--what did Ned Ryerson suffer from that made him almost miss the prom? If you guessed shingles, you're right!

Back again not long later, to tell us how the Tip Top was an empty storefront. He suggests, miming leaving the screen by going downstairs, that the real life version didn't last because of global warming.

During Phil's "pretty good day" speech, Ned tells us how Rubin's original was partly based on Elisabeth Kubler-Ross' five stages of death and dying.

Ned pops up in the cake-eating scene to tell us Murray really ate all the cake in the various takes. I really wish he'd tell us something not in Ramis' commentary.

Another awesome commentary track I recall was for Kingdom of Heaven. It's got a pop-up track with little boxes full of historical information about the real-life events and characters behind the events in the film.

Ned's next trivia question is about what actor Phil is dressed like when he goes to the movies. The timing on this one is nice because he asks it even before we see Phil get out of the car and the answer isn't actually in the movie; no one asks Phil why he's dressed like Clint Eastwood, for example. You just have to know what that costume is.

I really want to watch/listen to all of the film commentary tracks on this list; actually, the Lord of the Rings trilogy is on that list, so I have already gotten started.

(It occurs to me now that Day Break--which I watched over again for this blog--has commentary tracks over all of its episodes on the DVD, but I have listened to none of them. I should maybe listen to at least the commentary for the final episode, see if they try to excuse the fact that the time loop had no explanation and no real external reason to end.)

Ned walks out during the date night sequence to tell us that the restaurant is in Chicago. I think that's actually less information than Ramis tells us in his commentary over the same scene. If this commentary was going to be in-character, maybe they should have let Ned talk about the locations as if they were in Punxsutawney, maybe comment on how good or bad the restaurant is... I don't know. I like the idea of this commentary track but I'm not sure I care for the execution... so far.

First snowman scene, Ned tells us how most of the snow for the movie was created from ice. I'm not sure if Ramis tells us that, but I know Bob Hudgins talked about it on the walking tour in Woodstock. Ned pops out again during the gazebo dancing scene to tell us that was real snow falling.

Just before Phil grabs the ice cream from the window sill, Ned has another trivia question--What was Rita's favorite flavor of ice cream? I must nitpick. Rita says she loves Rocky Road. She does not say it is her favorite.

A slightly different detail on the slapping sequence than Ramis gives us. Ramis mentions that the slaps were real; Ned tells us they filmed slaps at a bunch of locations so they could figure it out in editing as needed. I wonder if there are slaps not used in the movie.

As Buster and Goober put Punxstuawney Phil into the truck, Ned comes out to tells us that's Brian Doyle-Murray, Bill Murray's older brother. As I mentioned in my entry dealing with Scrooged, he's not the only other Murray brother to act.

I called it beforehand--Ned walks out to tell us the groundhog bit Bill when they were filming the chase.

Trivia question as god day gets started regarding the name of the diner--the Tip Top Cafe.

Trivia question as Phil and Rita cross Gobbler's Knob after leaving the Tip Top regarding how many times Phil has covered the groundhog ceremony. It's a weird question for a couple reasons: 1) Ned does not specify that he means time seen on screen, and really, he probably shouldn't because he'd Ned Ryerson, not Stephen Tobolowsky and 2) do we count the day Phil shows up for his report but we don't see the report (Day Three and the "you look terrible" morning)? 2b) do we count the report seen in the back of the van at the beginning of the date night sequence (even though it's the exact same report we see on Day One)? Ned gives the answer as four, so I guess he's counting the latter but none of the arrivals without on-screen reports.

As Phil finally gives O'Reilly money, Ned pops up to ask a "toughie"--the name of the music that plays at Gobbler's Knob. It's the Pennsylvania Polka.

Second scene in Mary's house, Ned tells us that Bill Murray was really playing the piano but couldn't read music so learned the song by ear. 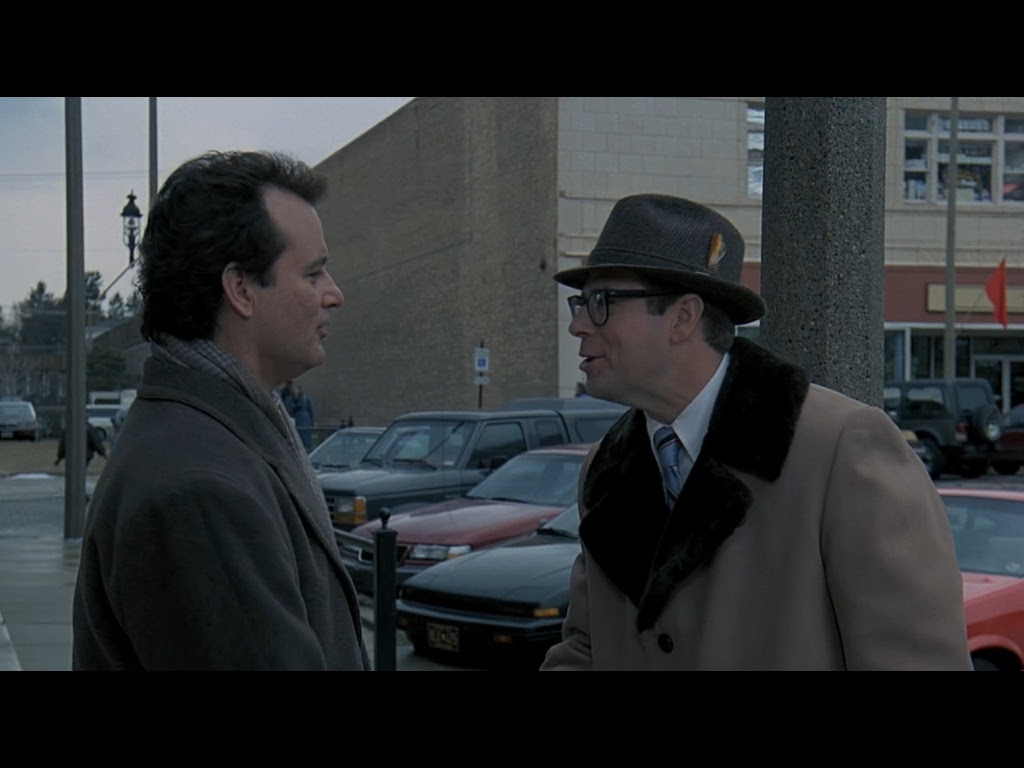 And, then comes Ned's big mistake. In the infamous hugging scene, he asks us how many times Phil runs into Ned on the same street corner. 1) Ned really shouldn't be limited to what is on screen. 2) He gives the wrong answer: 5. The answer is four. This hugging scene is not on the same corner as the others. It's on the opposite side of the square. Phil runs into Ned on Day One, then has a slightly weirder interaction with him on Day Two, pushes him aside on Day Three and punches him on Day Four. All of that happens over near the Tip Top Cafe. The hugging scene happens over by Anderson's Fudge Shoppe and the Pennsylvanian Hotel.

Phil feeding O'Reilly and Ned comes out to mention how religious communities embrace the film.

Just before Debbie and Fred come up to Phil at the dance, Ned tells us, inaccurately, that the original script had Phil in the time loop for 10,000 years. Though Rubin has suggested it was as long, the script doesn't say that.

As Rita's buying Phil, Ned comes on for a trivia question--Who wrote the poem Rita recites to Phil in the Tip Top Cafe? Sir Walter Scott.

Ned tells us that Ramis shot the penultimate scene 25 times because it's such a pivotal and important scene. I've written before about the real reason they shot that scene so many times--trouble with Bill Murray over how the scene was supposed to play out, even a debate about what he should be wearing and whether or not Phil and Rita had sex the night before.

And Ned comes on finally to tell us that the gate was frozen shut and the filmmakers decided to have Bill lift Andie over it. I believe Ramis says that was Bill's decision, actually. Not sure if I'd classify him as one of the filmmakers, per se.

All in all, I stick by my earlier assessment. I like the idea of this commentary far more than I like the actual execution. If it's going to be Ned Ryerson, then he should be commenting as if what's on screen is real. If it's going to be Stephen Tobolowsky, then he should be giving us some good storytelling insights into the production. And, either way, he should be telling us far more that isn't already in Ramis' audio commentary. But, I am glad I finally got around to watching it.

Today's reason to repeat a day forever: to learn all about everyone around me and then take turns just following each one around, commenting on everything they do and revealing "behind-the-scenes" information about their motivations to everyone with which they interact.