Briefly in class tonight we were talking about the "mean-world syndrome"—a part of George Gerbner's Cultivation Theory that tells us basically that the more we watch television, the gloomier our view of the world tends to be. Essentially, we watch TV shows or the news that includes say violence and murder and, while it's entirely unlikely for a lot of us to actually be exposed to such things in real life, we start to think it's more likely because, well, that's what we know. TV becomes reality.

That got me to thinking about Groundhog Day because, well, everything gets me thinking about Groundhog Day. And, I wanted to say, basically, that Phil Connors, even pre-loop, is not a bad guy. I tend to think that fundamentally none of us are bad people. But, sometimes only certain actions of ours get a response, so those actions get repeated. And, we don't even need responses to be positive, we just need them to be. Phil's insults get more immediate results than being nice would in his line of work. It may be a joke that he calls himself a "celebrity" but arguably he is, sort of a local celebrity in Pittsburgh. He's on TV a few times a day. Attention is his to lose. And, the easiest way to lose it is to be boring. So, he makes jokes in his weather reports, plays the smartass buffoon, and when he's off the air, he puts everyone down and takes turns charming all the women at the station. It's easy... for him. That wouldn't be easy for everyone, but it is for him.

It's actually quite remarkable how Phil almost immediately gets off his game on the first resumption of Groundhog Day. Talking to Chubby Man, he's not as quick to respond and he doesn't have any smartass prediction. In fact, he jumps to physical force. Downstairs, talking to Mrs. Lancaster (which just happened on my TV as I'm typing this), he's actually more... I'm tempted to say normal but really it's like he's more like me, a little less sure of himself, a little more hesitant. He's at a disadvantage and he's not used to that. This is a big part of why Daughton (1996) tells us, "Phil's situation, trapped in the time loop, parallels that of the economically disenfranchised, the Other" (p. 146). Weirdly, while Daughton continues this line by arguing (and I have agreed before), that through the course of the film, Phil finds "things to admire in people he once treated with contempt, people he would have initially as Other" (p. 149), the actual throughline of the movie could be summed up as Phil regaining, in new circumstances, his advantage. Seriously, by the end of the film, everyone else, one could argue, is once again the Other.

On the one hand, we have Phil learning all he can about everyone in town, showing off that knowledge to impress (or intrigue) Rita on "god day" and using all of his knowledge about the town and its people to commit enough good deeds to win his way out of the time loop. Kumaravadivelu (2008), citing Said (1978), tells us that "the colonized people are dehumanized, stereotyped, and treated not as communities of individuals but as an indistinguishable mass about whom one could amass knowledge" (p. 17). I wonder, since I no longer have a frame of reference anywhere close to the average viewer of this film, how many of those characters at the banquet at the end of the film matter, how many of them are more familiar than hey, it's that guy from before. I mean, most of the audience knows Ned by name. We should all know Nancy Taylor. Some people probably remember Debbie and/or Fred, people probably remember Doris, but who remembers who Felix is? Does anyone care that the Piano Teacher's name is never given on screen? (It's Mary.) 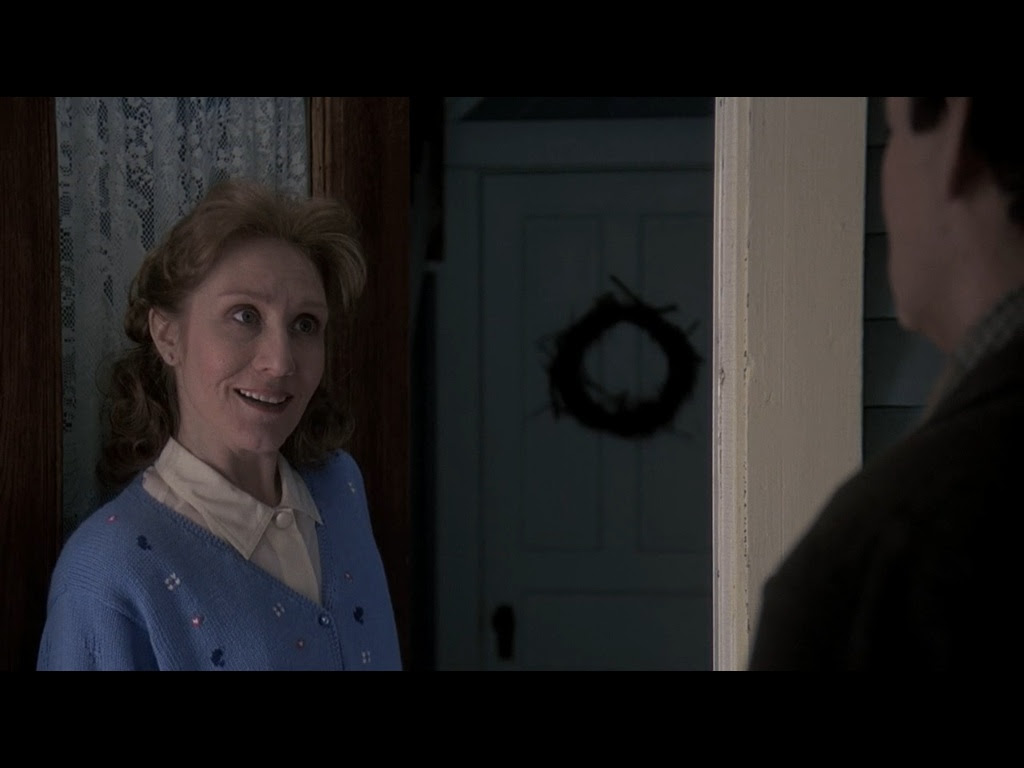 Even Benesh (2011) mistakenly refers to Buster as Mayor and she presumably spent a lot of time dealing with the film for her dissertation. Supporting characters don't matter to the average viewer, I would guess, any more than they matter to getting the plot moved another step forward. And, extras, even with names, are still just... extra.

(It occurs to me that structurally the film should work as a musical quite well—and I may just have to finally visit New York when that thing gets done—because the big finale song (before a quieter denouement with Phil and Rita the next morning) involves a whole bunch of background characters from throughout the story, come together to celebrate. It's no longer the wedding of earlier drafts—befitting a certain dramatic tradition. But, it is very much what the big final number in many a musical amounts to.)

On the other hand, Phil knows their names. Phil refers to the banquet as our party. Perhaps the point is not that Phil has regained his advantageous position, because the reason the film works, after all, is that we believe he has managed to be a better person, that he is helping all of those people because he sees good in it... this film lifts us out of our cynicism for a little while, and that's nice. But, back to my point. Phil has gotten better. He hasn't amassed knowledge about the indistinguishable mass of Punxsutawneyans, he has gotten to know the local people. If we don't remember their names, or notice when they don't have them, that's on us.

Todays' reason to repeat a day forever: to remember everyone's name... I wrote a little one-act play a few years back that had a very simple setting, inside the trenches during a lull in fighting in a deliberately unspecified war. It was supposed to be about war and religion (there's a church in the background in the set description), but ended up having a major bit about names, about what we call each other and why. Honestly, when I'm talking directly to a person, I probably won't use his name—and I find it awkward in movies when main characters use names a bit too much (watch Titanic for a good example of that)—but I like knowing people's names, I like knowing if a person has a nickname. Names are like a foundation for so much of our identity sometimes. Hell, I've got a poem (written for a class assignment last year) about my name that I might read at an open mic thing next week. Names matter. The piano teacher's name is Mary. Mrs. Lancaster's first name is Florence. Phil's French Maid costumed date is named Laraine. The Old Man is either "Old Jedson" or "O'Reilly" and I've taken to calling him Jedson O'Reilly. And, many months ago, I had an entry about names I've given to characters who do not have their own names. Really, today's reason to repeat a day forever is not just to know everyone's name and remember it but to know what each individual's name means to that individual.