to the little lady

We're 80 days out and The Groundhog Day Project is winding down. Eighty days seems so short right now. I've still got a few weeks of school left for the spring quarter, then summer, for which I'm hoping for some very specific plans but don't have them yet. Before I even realize it, this thing will be over and then where will I be?

But anyway, I was just reading Day 80: i have an alcoholic now, one of the only entries where the title has pretty much nothing to do with the subject. I used it because the previous day's entry had used the preceding line: "most of my work is with couples, families." In retrospect, I shouldn't have done it, but we must live with our mistakes... (well, most of them).

So, I was reading the 80th entry to maybe echo it's subject--gender-defined quests--today. I keep wanting to turn the whole project into a sort of palindromic structure. Not sure why. I also keep wanting to revisit old topics to improve on them. But, with that one, I kinda like what I said and how I said it. I had the same problem the other day.

I'm already an hour into the movie tonight, and something on screen actually tied my thoughts back to that entry because of the gender thing. It's this exchange:

I'm thinking about a feminist critique of Groundhog Day--amusingly, I just found an article from The Guardian, 25 February 2014, that asks if feminism isn't stuck in its own Groundhog Day. I will try to look at the film as a whole, or at least more scenes in microcosm, in the future. But first just this exchange. Two lines.

The words themselves are plain enough. But, the tone tells us more. Rita expresses legitimate and genuine concern for Phil. Larry takes the opportunity to insult the man. There's a simple, gendered division just in this. The feminine side--Rita--involves genuine feeling, and expression of that feeling--recall Daughton (1996): "In fact, the rhetorical point of Groundhog Day has more to do with its protagonist coming to appreciate the stereotypically feminine focus on connection with others" (p. 141). The masculine side--Larry--deflects that expression, turns it on its head. Larry, like pre- and early-loop Phil, cannot demonstrate connection with another man--even though Phil's mental health arguably would affect Larry's job. He just can't. But, Rita has to. That's just who she is. I'm reminded of how Phil describes Rita, particularly that she is "kind to strangers and children." It's a detail about her that we do not actually see. But, it's an important detail because it builds up the image of Rita as some ideal feminine type. Similarly, as Davies (1995) reminds us, even by "god day"* Phil "has not learned to appreciate anything in Rita more than the most traditional, cliched attributes of feminity. 'You're the kindest, prettiest, sweetest person I've ever met in my life,' he intones to her dozing face..." (p. 228).

* Note: Davies mistakenly puts Phil's late night speech to Rita on the final night of the time loop, which actually would make this even worse. Phil would go, in a matter of hours, from appreciating this cliched attributes to genuinely asking, "Is there anything I can do for you today?" 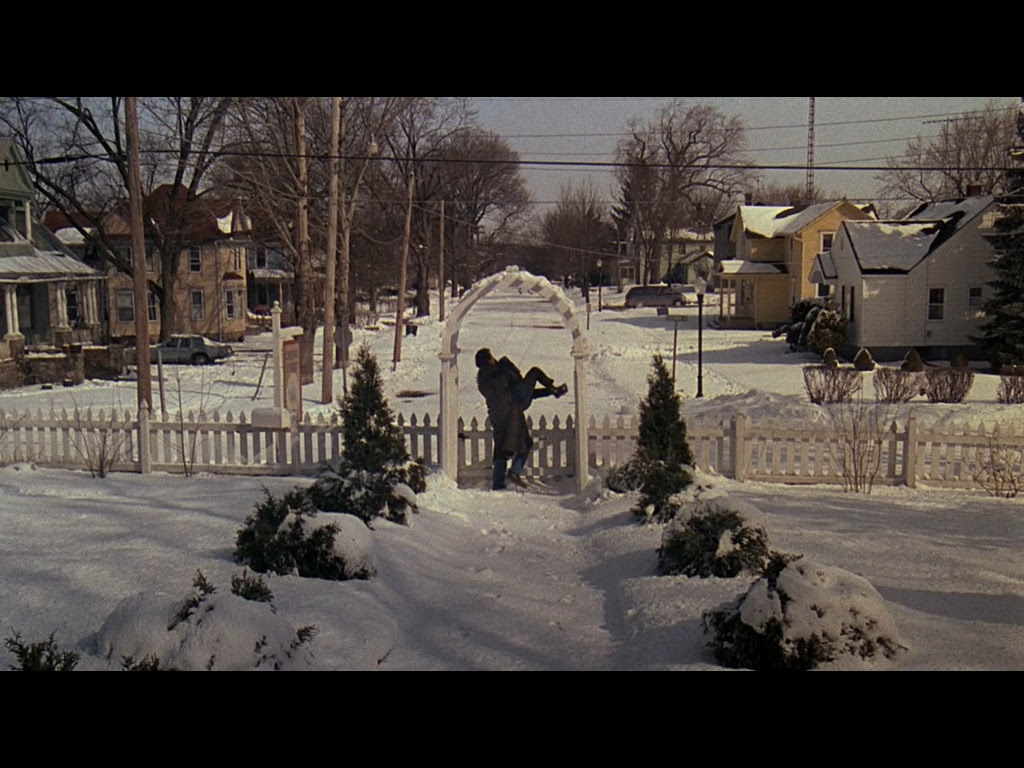 Davies suggests that the ending of Groundhog Day, particularly, Phil announcing where they will live in good patriarchal fashion (my phrasing), the story gives us "a refusal to take back to the big city the regenerated/redefined roles that have been so hard won in the repeated small-town day. It is not hard to see why they are non-transferable." My thing is a) the way Davies describes the situation, there have been no "hard won" "regenerated/redefined roles," b) the "non-transferable" thing is vital and seemingly deliberate on the part of Ramis/Rubin since the big city is what effectively made Phil who he was, and the small town quite clearly embodies and represents the better way of being. We don't need to take that latter detail as literally true, but that is how the two cities work within the structure of the film. Finally, c) Davies here makes an important point regarding the redefinition of roles but the refusal is not to take them back to the city but to keep them at all; sure, Phil wants to do something for Rita, but I'm not sure that qualifies as something strictly feminine. I imagine Phil has many times in recent days asking person after person, "Is there anything I can do for you today?" When he asks this of Rita, this is almost immediately after the life-changing, world-transforming news that he is out of the time loop. Is it really fair to believe this is a normal question?

Rita, in buying Phil the night before, has claimed ownership over him, but Davies is right in suggesting that the last bit of dialogue--Phil "assum[ing] responsibility for where they are going to live" (p. 228)--negates the redefinition implicit in Rita's purchase.

And, I want to take this further, but it is late. There is always more to say about Groundhog Day.

Today's reason to repeat a day forever: to get over gender differences and gendered stereotypes.