: a hatred of women

Origin: Greek misogynia, from misein to hate + gynē woman.
First use: circa 1656

Today, a simple listen. I want to find the lines (and situations) in the film that imply one of the above, sexism or misogyny.

An obvious one to start: Phil's calling Nan "Hairdo"--i.e. identifying her by a physical attribute that generally indicates gender. Reducing her synecdochally, like that, Phil dismisses her actual personality and uniqueness, reducing her power and increasing his.

--Larry's putdown could be considered gendered, suggesting a feminine focus as lesser than a masculine (or more equal-gendered) audience would be.

Rita's introduction, visually, playful against the same blue background where Phil was just working, suggests a lighter, but not necessarily a lesser role.

Rita sits in the back, Larry drives, Phil rides up front beside Larry. Could they not manage a 3-person front row a la Scooby Doo?

Phil's mimicking of Rita in the van is, oddly enough, not really gendered. She's just another little person, regardless of gender, for him to mock. It's almost equalizing. Almost.

Larry refers to picky talent like Phil as "prima donnas." Certainly a gendered terms, suggesting that only female stars can be demanding, generally, and here suggesting that Phil is acting like a woman in being demanding.

"Would you help me with my pelvic tilt?" An aggressive come on, specifically offensive to this woman he has only just met, but not really gendered.

"I slept alone, Mrs. Lancaster." Is it sexist--Phil so readily making suggestive comments? Or would he make the same comment if it were Mr. Lancaster who asked him if he slept well?

I've seen more than one source that quoted Harold Ramis as saying that comedy happens in the two-shot, that is a shot that includes two people interacting. So, I am hesitant to suggest that Phil's positioning with Mrs. Lancaster is deliberately aggressive or antagonistic--after his brief mock weather report, he steps up very close to her, effectively standing over her because she is significantly shorter than he is--or just the easiest way to frame that shot because of the proximity of the flowers on the left and that buffet on the right. It comes across a little domineering, a tiny little power move that adds to Phil's mockery with the espresso or cappuccino line to diminish Mrs. Lancaster and raise up Phil. It might not be specifically gendered, though, rather just Phil's approach to anyone he feels he is better than, which is just about everybody.

Ned's fur collar, high voice and bossy approach to conversation, not to mention that feather on his hat or the way he clings to his briefcase like a woman's purse, seem almost deliberately effeminate. 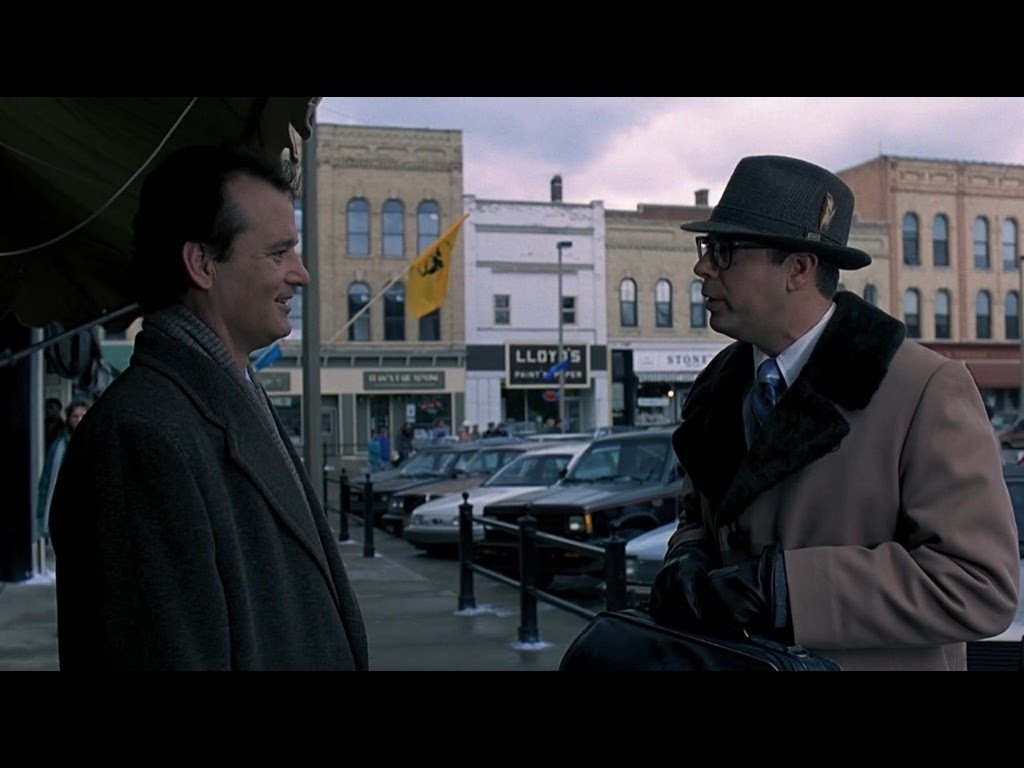 "Did you sleep okay without me? You tossed and turned, didn't you?" Phil's come on suggests, of course, that Rita couldn't possibly sleep without Phil, without a man to comfort her. Yet, I doubt Phil would care to do any comforting. He seems like the kind of guy who would sneak out after sex rather than stick around for anything like cuddling.

I can't decide if Rita's "Isn't he cute?" regarding the groundhog is suggestive of something weak, a woman finding the furry animal cute, or simply suggestive of Rita being able to see that Punxsutawney Phil is quite cute, that she can appreciate such details that Phil would never admit to. But, then, the reason he wouldn't admit to thinking such a thing would be because it isn't manly, isn't it?

Territorial battle over the horn in the van--Larry's "Nobody honks this horn but me, okay pal"--masculinity at its warrior best, fighting over insignificant things.

Phil calls the trooper on the highway "commander." Suggestive of dominance, though technically a woman could be a commander as well.

"Is your troop going to be selling cookies again this year?" Phil suggests Larry's sweater makes him look like a Girl Scout. Looking like a girl is, obviously, supposed to be insulting.

"Yo, Mama." Phil just can't be bothered to call people by their actual names. I believe I've compared that tendency to Sawyer from Lost before, exercising a small bit of power over someone by a) labeling someone they might not want to be called and maybe b) not even bothering to remember their actual name in the first place because you look down on them. He reduces Mrs. Lancaster to "Mama." It would be endearing if he weren't using it to get her attention to make demands of her. He does know her name; he calls her "Mrs. Lancaster" the very next morning.

Phil reduces just about anyone by relabeling. The guy on the phone who Phil is asking about phone lines--he calls him "Sport." It isn't used in a sexist way, though the immediate association between "Sport" and a young boy is sexist, but still reductionist--this guy cannot help Phil so he is effectively a kid, powerless. Phil also calls the DJs "boys." He will reduce anyone. He is not a nice guy.

(For the record, I am not considering Doris' use of "Hon" as anything but endearing and friendly. She uses it for both Rita and Phil, so there's nothing particularly sexist there.)

"...take it like a man..." Sure, this is perhaps an example of a line that critiques sexism, as it falls into Phil's categorical list of the usual rules society tells us to live by, which he will not much later say he won't be living by anymore. But, it is still worth mentioning here.

Phil kissing Mrs. Lancaster... exemplary of Phil's new status. He was already a white male in America, presumably upper middle or lower upper class. He was not exactly powerless. Now, he has even more freedom to do absolutely whatever he wants. Recall my interpretation of the Bronco scene. Phil represents an ideal sort of masculinity, twisted and inappropriate as that ideal may be. And, here he is, taking advantage of his white male privilege with the newly added bonus, time loop privilege.

It's weird that Phil's next use of that privilege, his interactions with Nancy Taylor, are not driven by anything particularly sexist. This is a situation I once referred to as time loop date rape and it's not sexist... though it is certainly shallow. Phil's proposition to Nancy, though--that could certainly be taken as a simplistic reification of normal gender roles and expectations to appease Nancy's appropriate paranoia at Phil calling her Rita.

"Fix your bra, honey." Maybe I spoke too soon with that parenthetical above regarding Doris. Phil approximates her own term of endearment here and, combined with the bra bit, it seems to be maybe at least a little sexist, that Phil can time Doris' movements by something only a woman would be doing, adjusting her bra. Of course, this comes right after his line, "Exit Felix and stand there with a not-so-bright look on your face." Phil is still reducing everyone to labels and insults.

In addition to Phil's representation of masculinity, Day 69: i don't even have to floss deals with Laraine's French Maid costume as well, certainly an example of sexist imagery. Phil then reduces Laraine not with sexist terminology but by implying she is a child when he orders their tickets.

That Rita is so stereotypically feminine in what she wants out of life and out of her "perfect guy"--is that sexist, quaint, or both? Phil's line--"This is a man we're talking about, right?"--that definitely pushes this conversation into sexism territory. "He's kind, sensitive, gentle. He's not afraid to cry in front of me." That's what set him off. What Rita wants is not stereotypically masculine.

Drink scene, note the banner on the wall--Punxsutawney has a Groundhog Day Beauty Queen. She's visible on stage at Gobbler's Knob... actually, no. 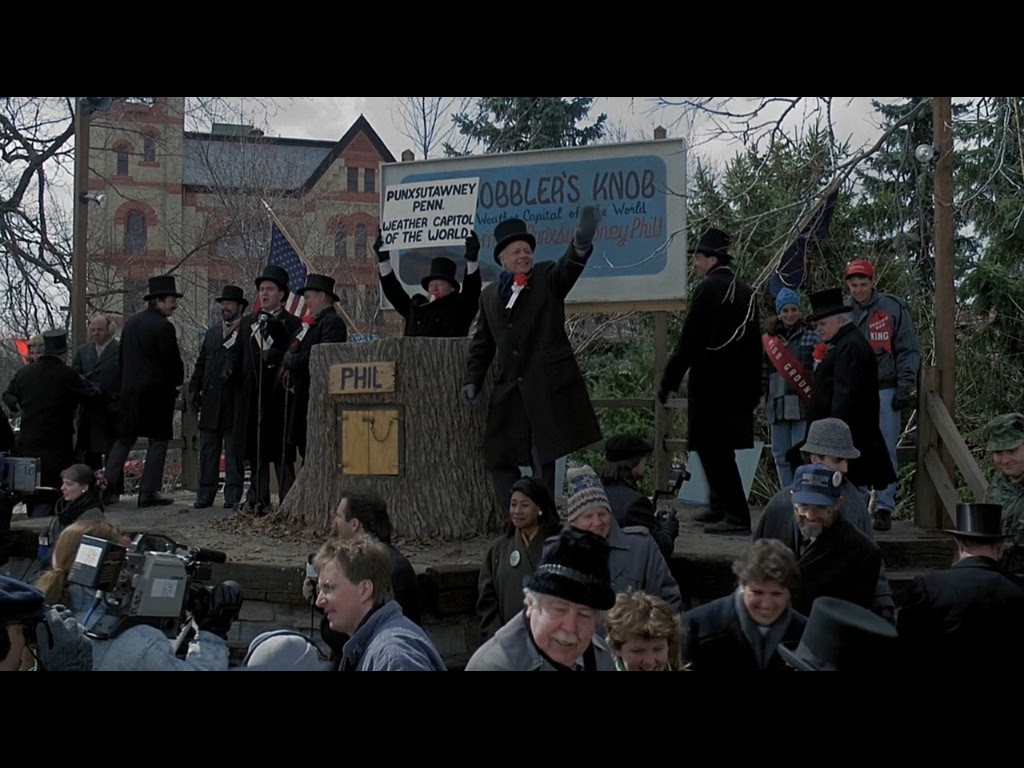 That is Miss Groundhog Day and the Groundhog Day King. The female's title is diminutive, the male's augmentive. And, the entire drink scene is a little sexist when you compare it to Danny Rubin's original script. In the original, this scene belongs to Tess, not Rita. Phil orders white wine (the feminine drink), Tess orders whiskey (the masculine drink). But now, since Rita is supposed to be so finely feminine, her drink of choice is sweet vermouth on the rocks with a twist, while Phil orders the manly Jim Beam--it's even got a man's name.

And, this is the second time Phil has offered to (and proceeded to) buy Rita something--this time a drink, before coffee and a donut--in order to get time with her.

Even Phil's French is sexist. He refers to la fille que j'aimera, the girl who I will love. Fille is not an adult woman.

Related to Phil's positioning himself close to Mrs. Lancaster way up above, when Phil gets Rita into his room and she walks over to the side where the bed is, he deliberately stays close and even gets in her way so it is difficult to get back to the other side of the room. 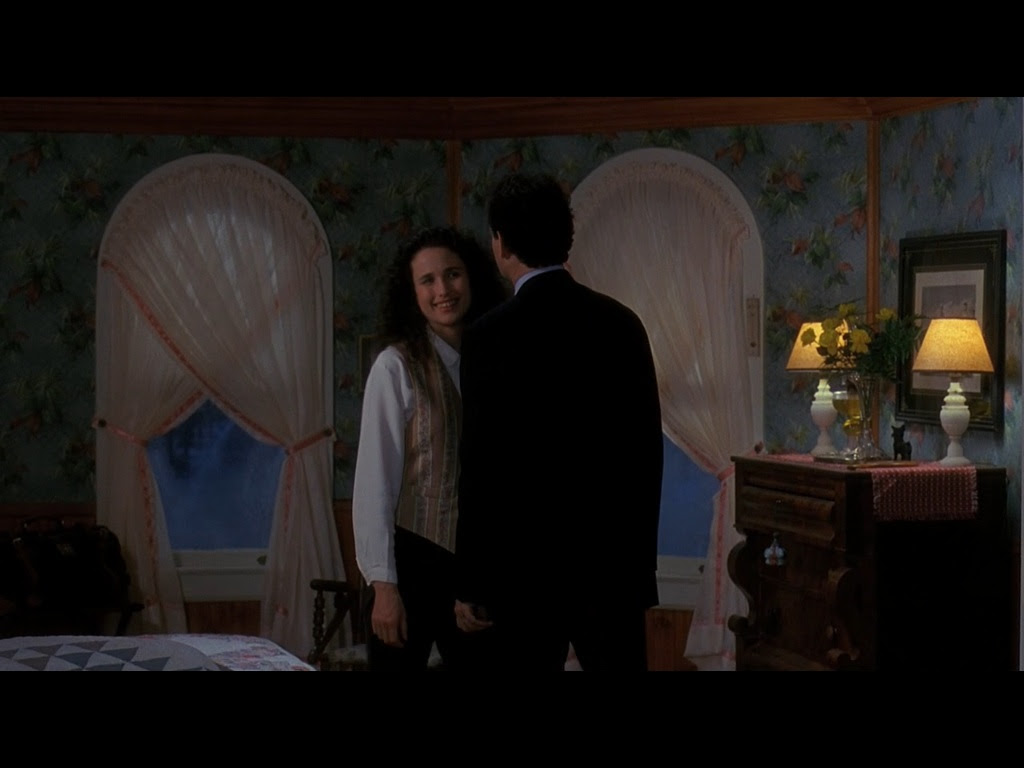 And finally, for today, I have suggested before that Phil's offer--"I will read to you"--is sexist. Or it's just lazy romanticism, or both.

Today's reason to repeat a day forever: to not take advantage of my white male privilege... except maybe some of the time, because, you know, time loop, no consequences and whatnot. But, I promise to feel bad about it.