so much about punxsutawney

in fact, I'm wondering now if use of the term few was mathematical

--found it boring. Or inane. Or, if you really know math, you might have been thinking in the back of your mind, who is this moron, thinks he can suddenly pretend expertise in math just because he's got expertise on Groundhog Day? Who does he think he is? To you--

now, that was mathematical, so I must apologize

--because that would be wrong

--I should apologize... except if you've been paying attention, I do crazy things sometimes in this blog. Maybe I came to my hedonistic stage late, maybe I like things to be a little random and unpredictable, or maybe I just needed to get my critique of the people of Punxsutawney RE: their treatment of the homeless--

the homeless? their treatment of Old Jedson O'Reilly

--because me and Punxsutawney have grown close enough over these nearly 280 days that we can critique one another without it coming across too judgmental.

And, that was a very long sentence. Not unlike Phil's time loop.

See what I did there?

(An aside: I may have just noticed something new--nothing major, but still, to paraphrase Phil, anything new is good.)

And, to quote Captain Hammer, "I hate the homeless--

--ness problem that plagues this city." This country, this world. So, while I don't like to inject political notions into this blog, I wish I'd been in a better mood last night so I could have said more once all that math talk was complete. Had a bad night last night at school and was actually thankful that I had the math stuff to finish up because it gave me an... objective in. I didn't have to work up something to say because so much of it was preplanned, just waiting on statistics and equations. The movie improved my mood a bit, and today was a good day. Took a bunch of members of the speech team to Midnight Mission in Los Angeles, where we helped with breakfast service. Had a dentist appointment after that, not really an obvious part of a good day, but it wasn't too bad. Went to campus early, got a pretty good veggie sandwich and some fries, then spent a few hours in our squad room helping a few students cut new speeches. Then, my grad class--Qualitative Research Methods--was actually pretty interesting tonight. And, now Groundhog Day is on again, and here I am working the steps...

And, I'm not sure why the AA line seemed to fit just then. Maybe it was Phil saying "drunk's more fun."

(Another aside: noticed something new just now--not the something new alluded to above; I'll get to that below. This something new was that right after Phil tosses the microphone aside on Day 2, and Buster is doing his spiel, reading from the scroll, the female reporter with the big 80s hair (not the one with the bangs, the other one) is doing her report. It seems wrong that she's doing her report while Buster is still talking. What is she reporting on? Why can't she wait 30 seconds to see what Buster has to say? She's rude--you'd almost think she was a local... that might have been taken too far. They're rude to homeless people. They are probably nice as can be to Inner Circle men.)

But, speaking (parenthetically) of those Inner Circle guys, does it seem wrong that these guys get dressed up all fancy and file their way up onto the stage to lead the rat worship festival while O'Reilly is basically dying a block away?

(A passing thought: I've mentioned how the layout of film-Punxsutawney and Woodstock (the filming location, newbies) differ. For example, Phil approaches the Square from what is, in real life, the north (i.e. heading south), right after leaving the Cherry Street Inn headed north. But, that's fictional geography mapped onto a real location, not necessarily fair. But, it occurs to me that cinematically, it's a little wrong as well. Phil leaves the Cherry Street Inn heading away from the audience. Next we see him, he is emerging from the left around the corner, passing O'Reilly. Then, what does he do? He comes toward the audience, only to turn to the right (his left) and be, again, facing the audience, entering Gobbler's Knob facing us, only to then get a reverse shot (maybe not the exact reverse angle, but close) as he heads toward the stage. Then, another reverse as he approaches the audience and approaches Larry and Rita. A shot-reverse shot thing works in certain circumstances--just now, for example, first car chase, camera is facing Phil as he's driving, cut to the reverse shot of police cars coming toward him--it puts us in his POV briefly before cutting to a side view as he crashes into the big groundhog. But, there's a thing called the 180-degree rule that... well, 4Filmmaking describes it like this:

You'll hear people talk about the 180 degree rule and not crossing or crossing the line when filming coverage. What is the line they're referring to?

If you can imagine an actor walking or running in a direction then you can picture the path they are following as a line. If two actors are talking to each other then draw a line to connect the two places where they are standing and extend the line in each direction to the edges of the set. Even if there are many actors in the scene you can still draw a line connecting the two opposing sides of the action. 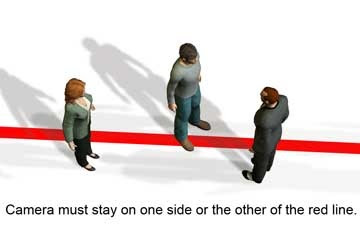 You're not supposed to disorient the viewer... unless you really want to, obviously.

(And, I'm wondering now if that crazy nested sentence structure above or even this parenthetical you're reading now is disorienting... and maybe you should wonder if it is on purpose.)

The bit I'm describing with Phil, though, it not particularly disorienting; I'm sure most people don't notice it, and I even only really noticed it in relation to real-world geography before. But, directions should make sense in any scene, really. I'm reminded of Jim Emerson's breakdown of the big chase scene from The Dark Knight:

The visual grammar is wrong.

Another example: at the beginning of the film, the news van is first seen heading left (northeast-ish) out of Pittsburgh, then it turns right (northwest) to leave the city and head for Punxsutawney. The van is now traveling to our right, as we watch. What is the next shot? The van on the road, heading to the right. The direction is consistent. As the van heads for Gobbler's Knob, we see it heading to the right... until it reaches the square, then it changes up its direction, but not to disorient the audience. Rather to explicitly (but subtly) orient the audience to the layout of the square. The van could have entered the square nearer the Pennsylvanian Hotel (which is on the south side of the square) but instead enters the square from the north and has to drive halfway around the square to reach the hotel. Now, aside from the buildings we see behind Ned Ryerson when he sees Phil, that other half of the square is not going to be featured in the movie, so that drive into town orients us to where everything is within the square. Everything that will be seen again later, at least.

Phil's walking entrance, oddly enough, follows a similar path, entering from the north (heading south), turning east then south again to enter Gobbler's Knob. The thing is, we have already been oriented to the square, and if this visual was supposed to reorient us by visually echoing the van shot, Phil really should have entered by way of the street where the movie theater is, just like the van did or, at the least, the shot as he entered Gobbler's Knob should have been angled a little better so we could see the movie theater in the background a little better to know just where we are.

Whether we consciously recognize it or not.)

Meanwhile--and yanking out of the parenthetical, that other new thing just came into play while I was typing all of that. And, it has to do with physical layout, not of the town but of the Cherry Street Inn. I think I've pointed out before that the internal layout of the Cherry Street Inn set actually makes sense for the building (even if the shot out of Phil's window is angled wrong, and there's nowhere for that little sink alcove to be if its window is real)--

Phil's room stairs come down in a northward direction, he meets Chubby Man on the second floor, then heads down the main stairs, first north, then turning and turning, finally coming down southward toward the front of the bed and breakfast

--and I just figured out where the TV room is. See, as Phil comes down the main stairs, the dining room is to his left (visually right for us). As he heads out the front door, there is another room opposite the dining room. I never really paid any attention to it until tonight. Have a look: 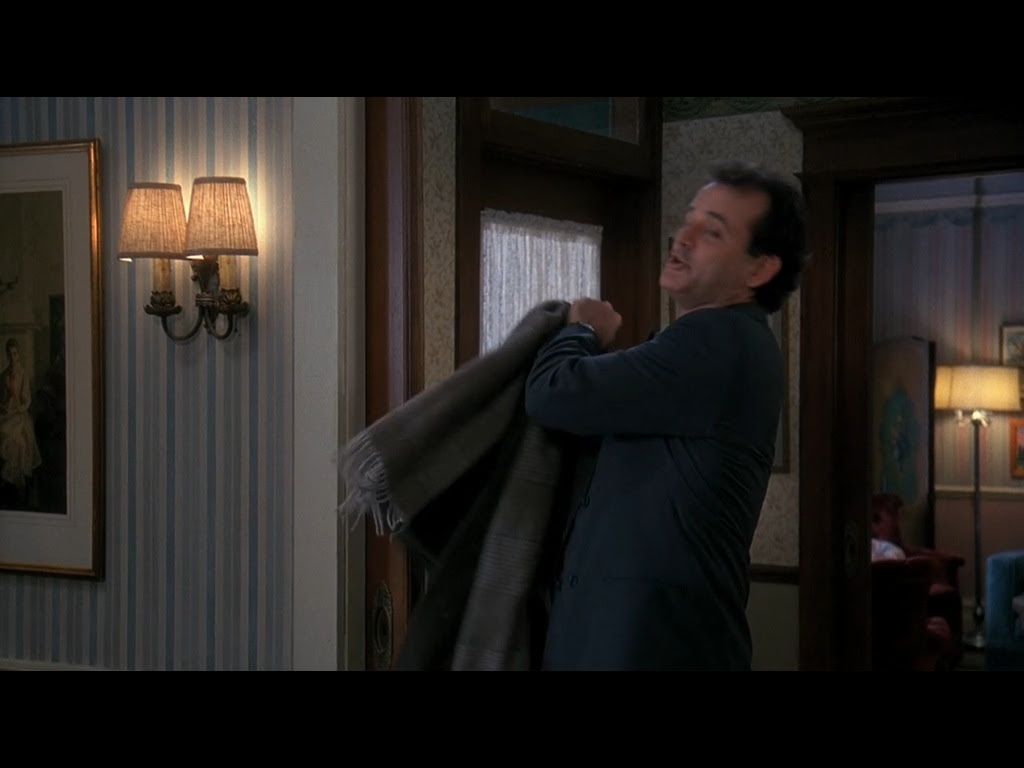 See the doorway on the right. Note the wallpaper, the red chair and the blue-armed couch. 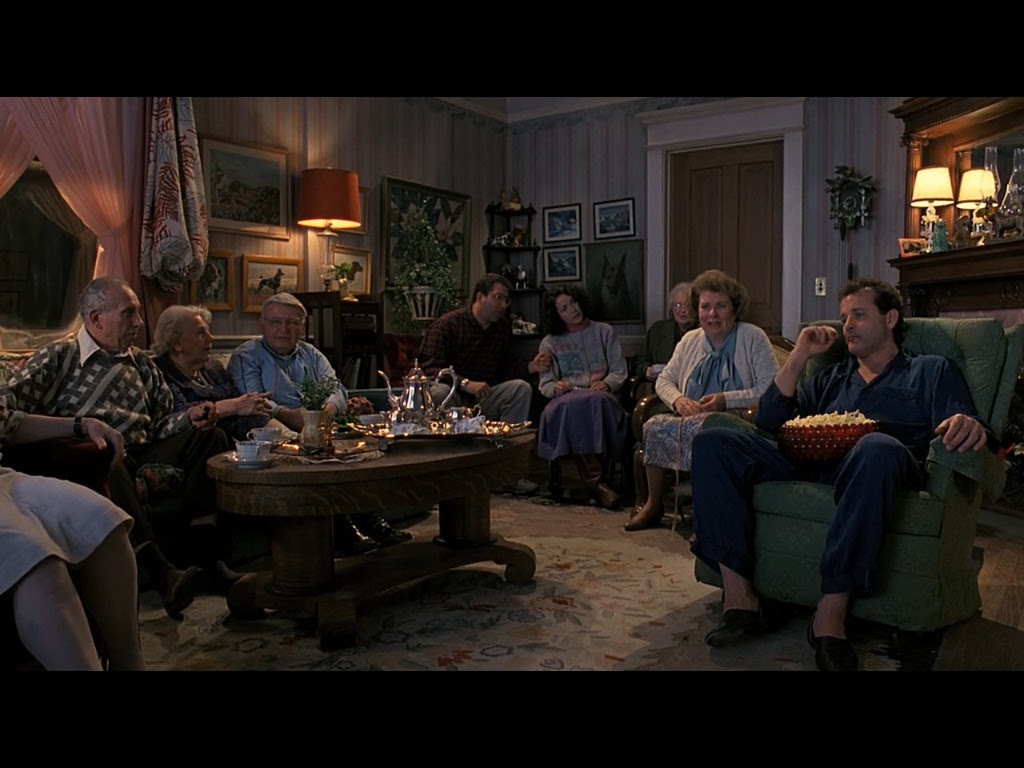 Note the wallpaper. Note the red chair barely visible on the left. Note the blue-armed couch. The couch cushions are actually flowered, but you can see the arm is blue, just to the right of that old guy in the middle.

(And, look at all those dogs.)

That's the TV room across the hall from the dining room.

Which has nothing at all to do with Punxsutawneyans not caring about O'Reilly.

Today's reason to repeat a day forever: to memorize a dictionary to a) impress people and b) know what a passing thought is.