allow things to happen to people

I imagine that Louis (Alex Desert), because I'm pretty sure no one says his character's name [Barry does], is actually Charles from Swingers--

--and then things get weird. Because does that mean that Penny's (Joelle Carter) negative experiences with Rob are why she changed her name to Ava, moved to Kentucky, and got involved with more a few men prone to violence? Did Barry leave Kathleen Turner Overdrive for (or change its name to) No Vacancy, change his name, leave Chicago for New York and pretend to be a substitute teacher because music wasn't working out for him? Did Epiphany Proudfoot survive Johnny Favorite, change her name, head north, and take up music in Chicago? Is Charlie Nicholson so odd because she's just a cover identity for Virginia Baker in between heists?

For that matter, is part of Sarah Kendrew's ongoing problems stem from Joe lying to her so much when she was Corey Flood? And, how did Rob Gordon also have time to be Lane Meyer and Lloyd Dobler, and how did Monique Junot and Diane Court not make the top five all-time breakup list?

Or, on a slightly different note, if Cosby sweaters are a thing in the universe of High Fidelity, did The Cosby Show exist, and were Rob and Barry and Dick so enamored with Marie De Salle not because of her Peter Frampton cover but because they reminded her of Denise Huxtable who they all had a crush on when they were younger and watching TV to distract from their real-life romantic entanglements or lack thereof?

And, I'm an inattentive idiot.

Put aside this movie character crossover crap I'm playing with today for a moment. I've said before that we don't know why Laura's dad died and it isn't really set up, except Rob listens to a voicemail from Laura's mother about her father's angina just 20 minutes into the film. And, having seen this movie 15-20 times I never noticed.

I am a sad, sad movie watcher.

And I wonder if Griffin Mill, AKA Ian Raymond thinks Rob Gordon looks a lot like John Cusack.

Does Liz remember when she was Rob's sister and not just his friend?

And, since his neurologist in Groundhog Day goes unnamed, can we assume that Rob's father (from the deleted scene) used to live in Punxsutawney?

I've already mentioned the Harold Ramis link there. But, I noticed another one in the credits. And, while it shouldn't be that surprising as both High Fidelity and Groundhog Day were made in and around Chicago, Rick Le Favour was the stunt coordinator for both. 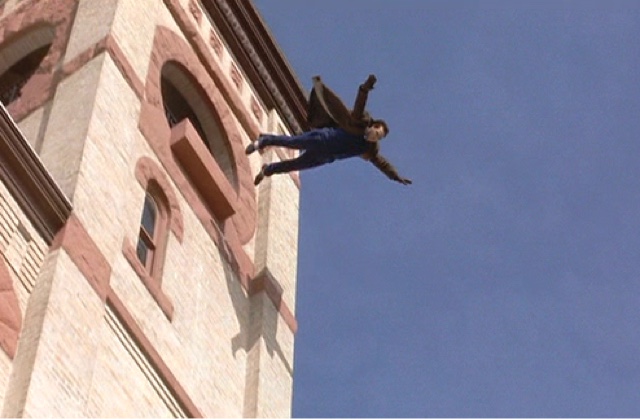 Seriously, though, how did Diane and Monique, or Beth Truss, or Sara Thomas, or Debi Newberry, not make the list? That is just crazy.

And why didn't Rob just use his CIA training and kill Ian outright?