where where was i going with this?

Today, I came to appreciate the sound design of Big Hero 6 while thinking of the next step in reifying my social justice warrior interactions with film. See, I had the movie on in the kitchen while making dinner, had my wireless earphones in, and while I could see the screen if I turned my head, mostly I was just hearing it. The sound in the opening bot fight, for example, was amazing.

(You should know how my IMDb scoring works, I suppose, to be sure what that means. For example, while The Shawshank Redemption and Pulp Fiction get 10s from me, so does La La Land, which I think is a fundamentally flawed film, and Toy Story and The Big Lebowski and Zootopia and Sling Blade, Jaws and Deadpool. Now, as much as there was talk last year about Deadpool being nominated for Best Picture, I don't think it should have even been considered for that. Best Picture is a different sort of ideal. While Get Out earns a 10 from me on IMDb, it is also not Best Picture material. I rate things on IMDb, sort of, on their own terms. Does Get Out achieve what it sets out (or seems to set out) to achieve? Does The Game achieve what it sets out to achieve? It's hardly worth comparing Toni Erdmann and The Godfather Part II, Sideways and Pi. In terms of cinematic greatness, I mean. A low budget horror film might earn a 10 simply because it manages to not have an entirely inane script and bad acting and it manages some genuine scares. A film that is basically a filmed stage play--The Sunset Limited--manages a 10 from me because it made me feel something. But, so does Cube despite some atrocious dialogue because it is one of those films that draws me in. When I didn't have things like Netflix or Hulu or Amazon Prime, I used to have these films that I might find late at night on cable and would immediately forego sleep to watch until the end; Cube was on that list. It's acting is often wooden or shallow, and its dialogue, as I said, is sometimes quite awful. But, that concept is captivating. Top Secret! gets a 10 because that film is just flawless. But, in no way would I say that, talking great films, it would even make the same list as Rumble Fish or Lost in Translation. I made a choice a while back to rate movies on IMDb according to what they are trying to be versus what they manage to be. Both of these things are relatively subjective, of course. In making a list of the great films of cinematic history, I would, of course, try to establish something more objective than that.

An 8, by the way, means a solid film that does a pretty good job of what it's trying to do. A 9 does it better, a 10 generally makes me feel something, even if only to inspire me to wish I could make films myself to produce something like it.)

I don't need a film to be flawless to be a a 10. I certainly don't need it to absolutely avoid controversy or "triggering" details like whitewashed casting. Prince of Persia's problems went far beyond casting Jake Gyllenhaal as the the Persian Dastan. Shymalan's butchery of The Last Airbender was much more in the script and the direction than the racially inappropriate casting. Jeff Ma, who is Chinese, told USA Today that rather than having a problem with British white guy Jim Sturgess play him in 21, "I would have been more a lot more insulted if they had chosen someone who was Japanese or Korean, just to have an Asian playing me." He was officially okay with Sturgess playing him. The previously cited Sharon H Chang makes the distinction between "color-conscious" and "color-blind" casting; she suggests that the voice talent of Big Hero 6 was an example of the former, "color-conscious" casting, "actors for the most part racially matched to their parts including two mixed race Asian male actors to voice Hiro and his brother Tadashi."

What takes Big Hero 6 down a notch from a possible 10, for me, is not its arbitrary Japanization of San Francisco or anything potentially problematic about the half-white child genius fixing his older, more experience betters' (?) projects, but in the simplicity (and imbalanced at that) of its plot. Big Hero 6's biggest flaw is also one of the reasons it happens to be quite entertaining. It had very little fat to it, very little fluff. The plot moves and moves and does not waste a scene. However, this means that it adheres to plotting cliches right and left and deals in the luck of coincidence and deus ex machina moments that make it seem, on repeat viewing, almost trite. The other members of Big Hero 6 form attachments to Hiro only offscreen, and we just accept it because, well, we want the superhero teamup we were promised. Callaghan's motivation is revealed close to 2/3 of the way into the film, which would be fine if there was better lead up to it. He mentions his daughter, and he has a problem with Krei, but the foreshadowing is not really there. The genius kid who is better at everything than everyone around him is a bit of a cliche. But, the emotional beats work really well... 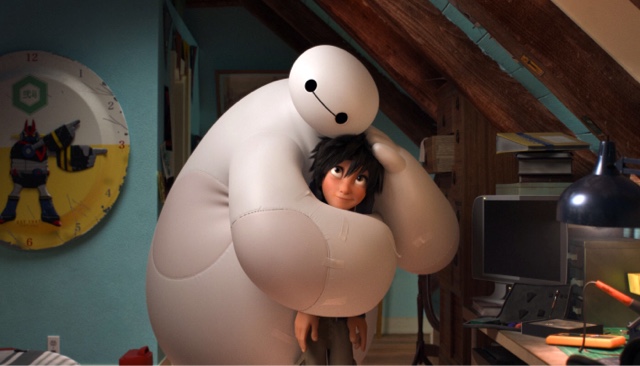