and all for this lunacy

Still 1981, but no James Bond today. Instead, we return to King Arthur. Excalibur. Now, I saw For Your Eyes Only in the theater, I'm fairly sure, and many times after on video. I do not actually remember the first time I watched Excalibur. I imagine it was on some Sunday afternoon on television, maybe a few years later. By the time I saw, it already knew about Arthur and the Knights of the Round Table. Sometime in the mid to late eighties (I think I lost my old collection of theater programs in one move or another, so I cannot check the exact date) I also saw the musical Camelot on stage several times. I'd read A Connecticut Yankee in King Arthur's Court and, presumably, other books about Arthur. I'd seen The Sword in the Stone on video (or would soon). So much of my knowledge about Arthuriana comes from vague memories that blend together over a few decades.

Movies are like that, too. I forget what some movies are sometimes, or imagine movies that never existed. (And, no, I don't mean Shazam.) There was this one movie, for example, that I saw the end of one time on television when I was young that I was sure was Friday the 13th. I had not seen any of those films yet. Wouldn't really see them until Jason Takes Manhattan was in theaters. Then, I would make up for lost time by watching the entire series many times. But, I had this vague notion of Jason Voorhees who, like Michael Myers with whom I was familiar, killed people and kept returning from the dead. I remember being both confused and amused by the idea that there was A Final Chapter and A New Beginning, as if someone really thought the series was ending, and then someone else just came along and laughed. Or maybe I invented that memory, just another of many, many visits to the Wherehouse blurred together, twisted up with memories of movies you've never heard of. The 1980s, the heyday of home video, when too many production companies were making too many films and my mother would rent just about anything, and she'd let me watch just about any of it. Saw a good chunk of Summer Lovers long before I had any clue what was going on in that film. Learned the sex didn't have to be missionary from Scream for Help a couple years later. Saw more horror films than I can count or remember. (I still think there are numerous films that haven't made it onto my seen it list on IMDb just because I can't remember the titles, or the memory of one film blends into another, or one moment stands out but the plot is lost to me. Like the "Nerak" bit in The Watcher in the Woods--couldn't tell you anything of the plot of that one, except that for some reason someone named Karen had her name reversed and someone got married; I remember "Going to the Chapel" playing... Or maybe that was some other film.

But, I was talking about films I think I've invented. Or spent years without the internet trying to find. Like A Zed & Two Noughts. I wandered into a screening of that one when I was at USC. I missed the beginning and never got the title. Twin zoologists film time-lapse decay of animals over and over, and have an odd relationship with some woman recovering from a car accident. And, in the end... No, I won't SPOIL it. But, trust me, I remembered especially certain visuals of that film and for years I had no idea what it was. When I got new editions of Leonard Maltin's Movie Guide, and later also Videohound's Golden Movie Retriever, I would pore over each page, read description after description, highlight each movie that I had seen-- Yes I was that obsessive that long ago. This kind of cinematically-obsessed madness does not just happen overnight. And, I guess I just missed the description for A Zed & Two Noughts or thought I had conflated it with Dead Ringers or some other twin movie. Then, one day, in the age of the internet, I threw some search terms into Dogpile (Google didn't exist yet), and found the film, and it was both as if a weight had been lifted and entirely anticlimactic. One of the holy grails of my cinematic history had been found. But an older one still remained (and new ones would rear their heads).

The Friday the 13th one--I always imagined what I watched was the end of the first Friday the 13th because, for some reason, though I had not seen the films of that franchise yet, I knew that Jason was only the killer after the first one. And, I saw a guy walk up out of a lake, and maybe he had a mask on, or maybe I've invented a mask by re-remembering the scene time and time again. He was definitely a killer. He was definitely dead but supernaturally arisen. And, he walked up out of a lake and credits rolled and it would be years before I knew that was not the end of Friday the 13th.

This is when I both neglected to say anything about Excalibur and got distracted enough by it to forget my rant about movies and memory. I guess the green glow of Arthur's sword works on me, too. 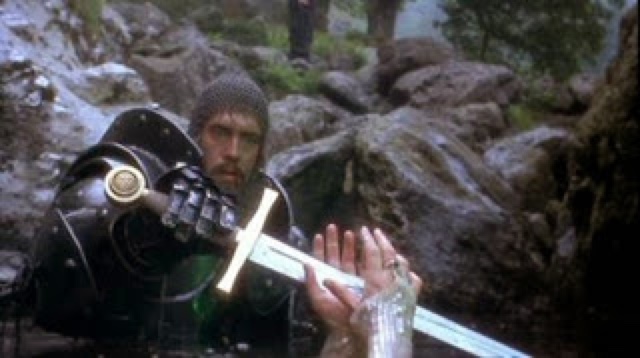 (And, I'll have to watch this movie more than once.)