drawn into this mess

Speaking of remakes and reboots and sequels, in theaters today is King Arthur: Legend of the Sword. Take a bunch of fantasy clichés, at least one biblical one, throw in some first act anachronistic organized crime (think: they cast Charlie Hunnam because they were fans of Sons of Anarchy and only then realized they were making a pre-medieval film), a whole lot of Robin Hood-style/freedom fighter stuff, and mostly none of the actual tropes of King Arthur stories. Which is kind of weird given that Guy Ritchie is from England. But, also exactly what one should expect given Ritchie's short-attention-span style of directing. 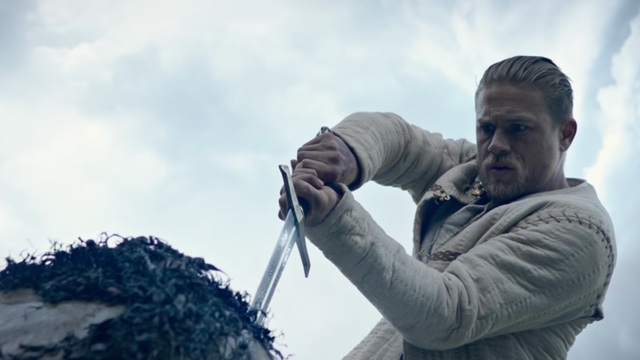 There are some great visuals here, of course. Ritchie can do those. The opening sequence's oversized elephants, for example--if we had reason by then to care about any of the characters being slaughtered, would be fairly frightening. We don't, of course. Have reason to care about any of the characters. In fact, we'll hardly have reason to care about most of the characters throughout the film. Particularly problematic right there in the opening is that the rewriting of the King Arthur story starts immediately. Rather than Vortigern (a name of another legendary British King) be the name of the one-off villain defeated in the cold open and Mordred (one of the customary villains of Arthurian stories) the villain through the main story, we get the opposite. And, they could have just switched the names. Sure, they would be changing the way Mordred is related to Arthur (his brother instead of his illegitimate son) but little details change all the time in Arthurian retellings.

Sidenote: the restraint at not having one of the future knights turn out to be named Lancelot was surprising.

Sidenote Two: That "the Mage" didn't get named by the end of the film as a gender-twisting Merlin or as Guinevere is less surprising and more stupefying. Seriously, had they wanted a sequel, they could easily have identified her as Guinevere. Had they wanted a surprise, they could have named her as Merlin. Instead, she gets no name, which just leaves her... a strange addition to Arthurian lore.

As for the film itself. The organized crime stuff early on is interesting but involves the film's biggest weaknesses. Arthur begins the film as a two-year-old, then we get a montage of him growing up not knowing who he is. He lives in a brothel, he learns to fight at the local Kung Fu school (seriously), he skims money off the top of everything and he and his partners turn into the local enforcers. The story of it is interesting, but this is covered in a montage that is maybe a couple minutes long. And, there are numerous beats in the montage and shortly thereafter that could have easily been the opening of a different version of the film. Additionally, the big Ritchie thing here is having characters describe what happened before or what's going to happen next, with just clips of the action rather than the action itself. It's like you're watching one film that is about another film. And, I really think that other film would have been amazing. Instead, we get occasional brilliant fantasy imagery tacked on to a story that is more Robin Hood than King Arthur, accounting for none of the British history and not an inkling of religion to speak of.

If Ritchie were let loose with an original fantasy setting and characters, he could probably do something quite unique, throw in the some anachronistically-toned crime stuff, play with classic fantasy tropes and then veer off into something truly strange. But, this--trying to tell a new version of a story we've seen so many times, then clearing away pretty much everything that makes this story this story, it's mildly entertaining at best but nothing particularly noteworthy.

And, that almost sounded like a review. Sorry about that.