they sing songs until they get too cold 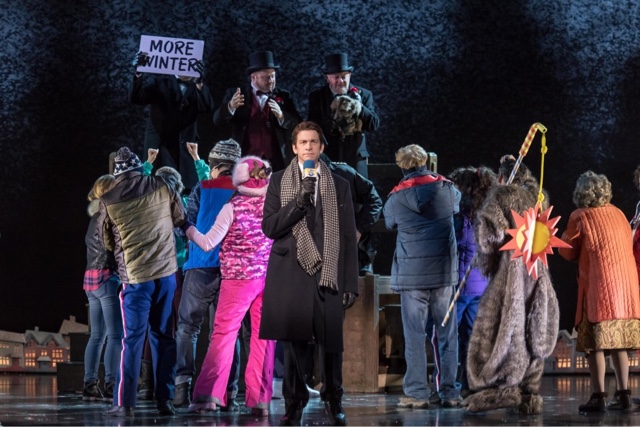 I've been obsessing over the Groundhog Day musical of late. I often obsess when I get a new musical to listen to, of course; this is not unique to Groundhog Day; it's just the latest. And, I wanted to talk about it.

I have not gotten to see it live yet, of course, because it's just in New York for now and I cannot afford to just fly off to New York whenever. As much as I'd like to.

(And, as I was writing this, I just got a notification about Tim Minchin's tweet about the show being nominated for seven Tony Awards.)

Thing is, I cannot cover all of it in one entry. Nor would I need to. Nor would I want to. This isn't a blog about stage musicals, after all. But, there are a few details that stand out.

I've written about Nancy many times, of course. I swear I spent an entire entry just on her once but I cannot for the life of me find that one. But, that's almost poetic in itself--that she is just a detail in other entries. That is Nancy in a nutshell. A detail in Phil's story. You can imagine an inner life for her, Nancy's Story, if you will, but this story barely touches hers. The link is just a series of tangents:

She's got her scene with Larry, of course, but that's the point where her story meets his, nothing to do with Phil's... even though we see it as part of Phil's. Kowalski (2016) says, and rightly so, that "Phil Connors arguably treats Nancy as a mere thing... As a mere tool for achieving sexual gratification" (p. 213). Storywise--and for Phil--yeah, sure. But, you spend as much time with a film as I have with this one, you imagine things beyond its borders. Like the film is just one angel on a hologram and I've spent so many hours looking at it that I lean in to get the other angles.

The version of Nancy that gets her own song at the start of the second act of the musical is so much of what I imagined. Rubin and Minchin have captured her perfectly. Ryan Gilbey (same guy who wrote an oft-cited-here book about Groundhog Day, reviewed the musical last August, when it was in London. He suggests that "Playing Nancy"--Nancy's solo--"challenges her... slender role in the narrative." But I'm not sure that she challenges the role, per se, just its slenderness. She asks, "Is it my destiny to be / A Brief diversion / Just a detour on the journey of some man?" And, she half laments: "I'll play whatever role I'm cast in / Will smile with perfect teeth / And grimace underneath."

And, she sounds like an echo of what Phil must think when he picks her up when she says, "So you take what you are given / Just to feel the love again."

(By the way, in the musical version, Phil claims, "I slept with ninety / Percent of women / In Punxsutawney / Between eighteen and eighty-four / And one dude when I was bored." I wrote all about the women Phil must've slept with offscreen while he was in the time loop way back on Day 277. Taking the musical's percentage as accurate, Phil would have had sex with something like 1800 women.)

Like Phil as he must have been back in Pittsburgh, before Stephanie, before Nancy, before Laraine, before Rita. Picking up woman after woman because it's the only way to feel loved. In Rubin's original script, Phil does actually manage to get out of town during the time loop (and in his narration, he suggests he's done it over the course of 300 years) and he goes to visit his mother in Cleveland. And, she tells him, "Your problem is all you think about is yourself." "How can you say that," he asks. "Ma, I just flew four hundred miles in this blizzard thing..." "Because YOU were lonely," she replies. "When's the last time you visited me because I was lonely?" (Rubin, 2012, p. 62). But, the film version, the stage version--we're left wondering how Phil gets along with his mother. How he got along with his father, as well. He does call O'Reilly "Dad" so there's presumably some issue there. Does Phil get along with anyone? Was Phil's trap in Pittsburgh that he couldn't manage to connect with anyone, to feel loved?

Taken in her stage version (and her presumed film version), Nancy is an echo of Phil just as much as she's "collateral / in someone else's battle," as she sings it. Hell, in watching this movie over 400 times now, I've turned Phil and Rita and Larry and Doris and Ralph and Gus and Mrs. Lancaster and everyone in fictional Punxsutawney, even Nancy, into the collateral in my battle, I suppose. And, the same goes for every character in every other film, in every book, in every musical, in every television series. And, for every person in the real world for that matter. Everyone is a star of their own story, sure. But, they're also supporting characters in yours.

"Playing Nancy" captures one of those supporting characters in her own story for a moment and it's wonderful.

Gilbey, R. (2016, August 18). Groundhog Day: how does Minchin's musical match up to the movie? The Guardian. https://www.theguardian.com/stage/2016/aug/18/groundhog-day-tim-minchin-bill-murray