i may have dozed off

Case in point: Pirates of the Caribbean: Dead Men Tell No Tales.

I will keep this short--unlike the Pirates of the Caribbean franchise, or any of its action sequences, that just kind of drone on well beyond reasonability. Seriously, each movie is basically the same--Jack, some varied background pirates (I think there are only 2 left from the original bunch), Barbossa, a young man and a young woman, quest for some magical MacGuffin, some supernaturally empowered villains tries to stop them, folks backstab and betray and turn on each other than back to each other, and, oh yeah, gotta throw in some British soldiers chasing after everyone, too. Make. Each action scene about twice as long as it needs to be, throw in some overwrought romance, some one-note characterizations and there's your Pirates of the Caribbean film in a nutshell.

Maybe one genuinely funny moment. Jack offers Will--I mean, Henry--advice on courting a brunette. He tells him don't get together with her sister, and if you can't resist the sister's charms, kill the brother. "Savvy?" Henry pauses for a moment, looks a little shocked when he turns to Jack and says, "No, I don't savvy." And, something in Depp's delivery--less trying for the joke that so much of the rest of his Jack Sparrow performance--on the next line absolutely worked for me. He just looks at Henry and asks, "Who hurt you?" It's silly, but it's silly in so much more of an effortless way than the rest of the film.

Honestly, I don't walk out of movies. I've only ever turned off, well, probably fewer than I can count on one hand, because they were just so awful. I considered leaving because this movie was just such a scene for scene rip off of its predecessors, and boring at that. 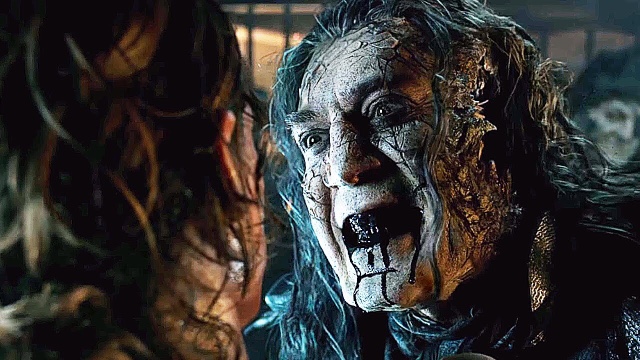