i never miss it

I drift away from talk of Woodstock--well, really, I planned to talk about reviews on the anniversary of the film's release, and that slipped into a bit about Bill Murray rather easily. But, I'm still not quite done with Woodstock.

So, subtitle this one: Notes on a Walking Tour (or Two).

And, the title is a lie. I miss Woodstock sometimes.

I still obsess about locations, by the way. Just tonight, I was trying again to find a location from the big car chase. On Saturday's walking tour, Bob Hudgins mentioned that they filmed on a highway "between Country Club and 120." In McHenry, not far from Woodstock, there's a country club not far from 120. But, I check street view in Google Earth and have yet to find the distinctive pillar visible in this screencap: 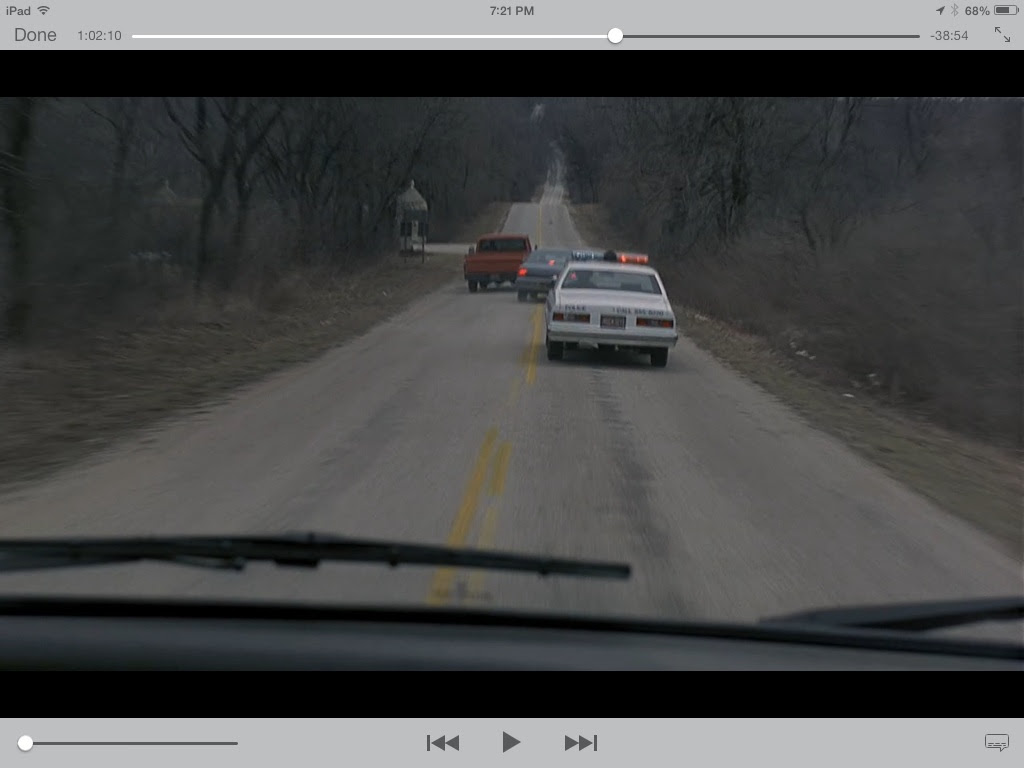 It's the sort of thing that I figure should still be around even if the nearby area has changed, more houses, fewer houses, whatever. But, I haven't found it yet.

But anyway. Things from the tour(s).

They scouted something like 60 towns before settling on Woodstock. Production Designer David Nichols, Executive Producer (also Unit Production Manager and Bank Guard Herman portrayer) C.O. "Doc" Erickson, and Location Manager Bob Hudgins drove around looking for a "Main Street Town." I don't know anything about Baraboo, Wisconsin but Hudgins called it "circus-themed" and it was there that they finally decided they wanted a "Town Square Town" instead of a Main Street Town.

(Their "Main Street" choice at the time was Mineral Point, Wisconsin.)

Walking around the square there, along with Harold Ramis, they saw a bit of a metaphor for being trapped in the square. And Ramis asked, "Can we find this closer to Chicago?" Hudgins had already filmed in Woodstock before, for Planes, Trains and Automobiles, so sure enough, he already knew where they could find what they wanted. In Woodstock, they went into the Opera House tower and looked down and Woodstock was their location.

Some local business owners didn't like the idea of the town being taken over by a film crew. And, initially, it wasn't even supposed to involve much shooting there in Woodstock. They had scouted a Gobbler's Knob location in the woods (not sure where)--keep in mind, the real Gobbler's Knob is outside of Punxsutawney rather than centrally located, which is why they didn't want Punxsutawney in the first place. But, then they thought of putting Gobbler's Knob right in the square--much like Ramis' advice to Rubin when they were revising the script, to give all your good scenes to main characters, it makes sense that you would put your central location right there in the square.

But, this meant they would be filming longer at the location. I neglected to write down (apparently) what the original schedule would have been, but it turned out to be a 60-day shoot, with six 5-day weeks on the square, and they finishing production 4 days early.

As for those business owners, there were 23 at first, and at meetings they had pins with the number 23 on them. Meanwhile, the production had to build Gobbler's Knob--not just the two-level platform where the Inner Circle pull out Punxsutawney Phil and where press stand, but also they had to level a bit of the square to make it possible. And, every day they had to use ice to make "patchy snow" to make it look right. Along the way, the pins changed to 14 and after filming the production resodded the entire square and redid the walkways.

The mayor's office doubled as the psychiatrist's office, hence me photographing the outside of city hall.

A handful of cast and crew played basketball at the local Junior High every Sunday.

The first friday night in Woodstock, they had a party in the Courthouse that was interrupted by the police. The "honey wagon" full of costumes and whatnot, had crashed on a nearby highway.

Another police story: One local businessman--a dentist who was among the 23 if I remember the story right--got pulled over by police because he had fake plates on his car. See, they were using magnetic license plates to make all the local cars look like they were from Pennsylvania and he had neglected to remove his. He came back angry.

The night they filmed the car crash--Phil crashing into the giant groundhog with Ralph and Gus riding along--there was a fire a few blocks away, a bar just off the square (between Old Man's Alley and Wayne's Lanes).

The Tip Top was a closed down clothing store that didn't even have running water or electricity.

Cast and crew stayed anywhere they could around town. Bob Hudgins, for example, took an apartment on the square. Bill Murray had a house, as did Andie MacDowell. Danny Rubin stayed at the Holiday Inn, where a lot of the crew was staying.

Woodstock Jewelers was left in place on purpose, a nod to the location. On that IMDb goofs page, on which I'm pretty sure my corrections still haven't shown up, that was called a mistake.

The "only real snow" in the film, according to Hudgins, was in the final scene--the morning of February 3rd. Ramis, in his commentary, says the snow that fell on the last night in the film was real (in the long shot, anyway, not in the closeup), but that could easily have been the night before what Hudgins was talking about. Anyway, they had warned the locals on Madison (the street that dead ends into the Cherry Street location) that if it snowed they should not shovel their walks or driveways because the production would descend upon them. Sure enough, in that final shot, you can only see a couple people on the street. The minivan--which I've argued the symbolism of before--was Hudgins' assistant, Kimberly K. Miller, because they didn't want the scene to look completely dead.

The bartender, aka "God," was the best paid actor on the film, as Hudgins tells it. See, the bar set was in the courthouse building and it was set aside as a cover set, for when the weather got too bad and they needed something to film. The weather never got bad enough, so they didn't get to the bar scenes until the end of production. Meanwhile, John Watson, Sr., who played the bartender, was getting paid whether they used him or not.

Kelly Frank, who owned the house they used for the exterior of the Cherry Street Inn, thought they were joking when they first told her they wanted to use her house for a film about Groundhog Day because she happened to be from just outside Punxsutawney.

The interiors of Cherry Street, by the way, were built in a warehouse in Cary, Illinois.

There's plenty of other stuff I could mention--like I corrected more than just the snowball fight location, and Hudgins deferred to me to answer a question about the Tip Top. But, it's late (12:37 AM as I type this) and I could use some sleep. I'll deal with the location corrections later when I compare photos and screencaps... whenever that will be.

Today's reason to repeat a day forever (if it happens to be the day of either walking tour): to not only memorize what Bob Hudgins has to say but to ask many questions... too many questions, so I know everything there is to know about the filming of Groundhog Day.