somebody asked me today

I must admit I had nothing to write about today. So, I asked my daughter Saer to ask me a question about Groundhog Day and I would spend today's blog answering it. She asked what Phil Connor's favorite color is.

But, an aside first: I kept busy most of the day, including cutting apart the deleted scenes from Groundhog Day for later use, skipping through Planes, Trains & Automobiles and all three of the Nolan Batman movies (because Bob Hudgins mentioned that the Amstutz Expressway in Waukegan, Illinois--which is where Phil talks to the trooper in the snow--was used in one of those...

(I swear he implied it was the latest one, but it was in Batman Begins (and I started with the latest and worked backward) that I found the brief moment in which Batman drives the Tumbler on that highway.)

Since I found it and all, here you can see the shape of the overpass (where the Amstutz deadends):

Which is the same shape (but I'm fairly sure not the same bridge) as the one in Groundhog day: 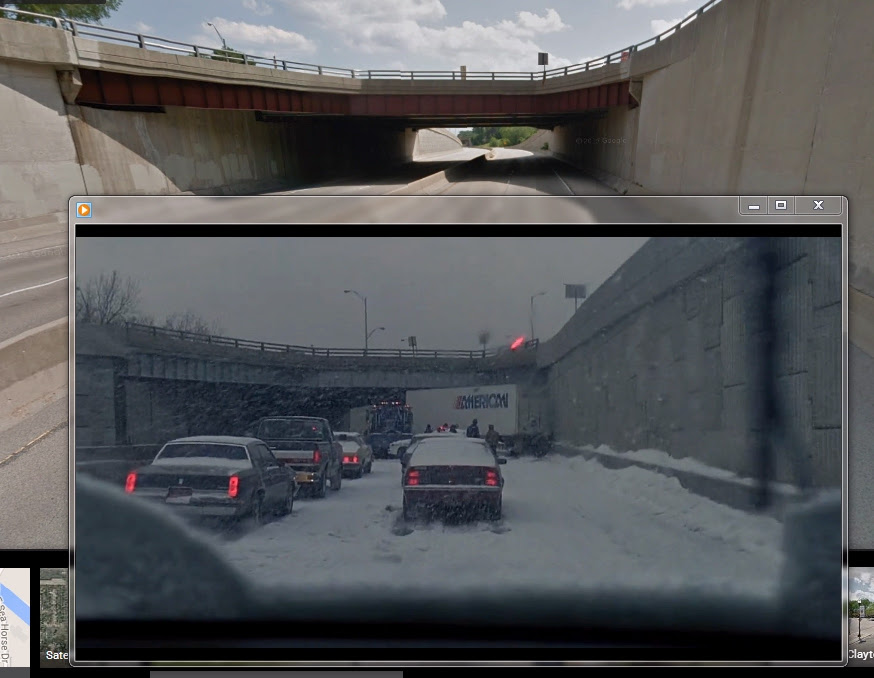 And, here's the bit in Planes, Trains and Automobiles they filmed in Woodstock. The clip might disappear. I've successfully argued against tags that my Groundhog Day videos were legitimate uses on YouTube but a clip from Jurassic Park I used a while back still has the tag that it matches "third party content."

But, I was answering a question about Phil Connors' favorite color.

My impulse was to say blue, because, well... duh. But, after anywhere from 34 days to 10,000 years there in Punxsutawney, he'd probably be sick of blue and white because they are everywhere. Benesh (2011) has a whole section on those two colors, which I've mentioned more than once. Colors that are not very common there in Punxsutawney: hotter colors like red or orange. Yellow. There's hardly any green. And, green is representative of life and that spring that just isn't going to come for Phil...

And it occurs to me--and this has nothing to do with the topic at hand--that in recounting bits from my notes from the walking tours, I neglected to mention Hudgins' story about what may have led up to Bill Murray being bitten by Scooter (the groundhog). I don't know how intelligent groundhogs are, so I might just be reading into this. But, here's what Scooter witnessed not long before he decided he'd had enough car chase filming for the day and bit Murray twice:

So, they're filming on a highway--which Hudgins says was between Country Club and 120 [presumably in McHenry, or maybe he said that specifically] but who knows because that's one of the few locations in the movie I still cannot find. This particular stretch of road is so not busy that they are interrupted only twice, by a farmer and a schoolbus. Anyway, the schoolbus stops and Murray, to be funny, takes the stuffed groundhog--Scooter's stand-in--and proceeds to beat it against a fence post over and over to freak out the kids on the bus. I imagine Scooter sitting nearby watching this, and what does he see? This guy who he's been working with all day, and who he is about to be stuck in that truck with, is beating another groundhog. Scooter doesn't know that groundhog, or maybe he's seen him around and wondered why he doesn't move much, but still, you see someone beating your fellow marmot to death and you can't help but get a little angry. And, then they shove you in a truck and you're supposed to pretend to drive because that will make the kids laugh. But, you're sitting there with a murderer. And, you try to hold in your anger because you got to pay the bills. You've got a family of little groundhogs at home in your stump, and you need this job. But, the anger gets the best of you and you lash out, bite down on that murderer's hand a couple times and then filming is done. And, you go out drinking that night with your buddies and you brag about biting the human who beat up another groundhog, and you all have a moment of silence for the groundhog whose name you didn't even know. Then you buy the next round because you've still got the movie gig and all is good.

But, I was talking about colors. I figure Phil, being changed by the experience, probably wouldn't choose the same color as his favorite post-loop as he would have pre-loop. And, I figure pre-loop Phil might have cited red as his favorite color, because well, just read this bit from "Your Favorite Color: What It Says about You":

Red: The color of strength, health, and vitality, Red is often the color chosen by someone outgoing, aggressive, vigorous and impulsive—or someone who would like to be! It goes with an ambitious nature but those who choose it can be abrupt at times, determined to get all they can out of life, quick to judge people and take sides.

Mid-loop Phil, like when he's robbing the armored truck, swimming naked at the local Y, drinking with Ralph and Gus, or doing drugs with "a slut named ANGIE and another overweight, not very pretty MADONNA WANNA-BE, both in too-tight jeans and bullet bras"--a couple of those are from different versions of the screenplay, in case you don't know--he might pick yellow.

Yellow: The color of happiness, wisdom and imagination, Yellow is chosen by the mentally adventurous, searching for novelty and self-fulfillment. Yellow usually goes with a sunny and shrewd personality, with a good business head and a strong sense of humor. It is the color of intellectuality and all things to do with the mind. Yellow folks are usually clear and precise thinkers who have a good opinion of their own mental capacities and who have lofty ideals. They may at times tend to shun responsibility, preferring freedom of thought and action.

Post-loop Phil, being all zen, would probably choose green.

Green: The color of harmony and balance, Green symbolizes hope, renewal and peace, and is usually liked by the gentle and sincere. Greens are generally frank, community-minded people, fairly sociable but preferring peace at any price. Green people can be too self-effacing, modest and patient, so they may get exploited by others. They are usually refined, civilized and reputable.

So, in answer to my daughter's question, it depends on when, but I'm going to go with green.

Today's reason to repeat a day forever: to figure out how to live my life in line with a different favorite color every day.