i'm waiting for the punchline

On the one hand, I've got nothing in particular to write about tonight. Phil has just figured out that he can take advantage of the time loop on my TV, and just punched Ned. I got back from hanging out at a speech tournament less than an hour ago (and it's 11:21 PM right now), and I've been out most of the day.

(I wasn't judging, and didn't snag any sheet of impromptu topics, either, so I won't be connecting Groundhog Day to a bunch of random quotations.)

On the other hand, I've been meaning to get back to critiquing Benesh and I've still got a handful of Groundhog Day-related articles nearby that I could write about or in response to. In particular, the manila folder that holds articles I haven't stuck in one of my Groundhog Day Project binders, is open to "Seeing the Shadow" by Dairyu Michael Wenger Sensei. It's a Buddhist piece. I was thinking about writing about the Buddhist take on Groundhog Day again. I didn't end up choosing Groundhog Day as Buddhist Film as my topic for my rhetoric paper this quarter, though it was my second choice, so I do intend to get back to some Buddhism-related stuff in this blog again soon.

The "Seeing the Shadow" piece mentions "unexamined shadows." My shadows have not gone unexamined. When my wife and I first separated, I had weekly therapy sessions, and ever the overthinker, I've spent plenty of time outside of actual therapy to figure out what all of my "shadows" are. Regarding shadows, I was glad today that I didn't begin this blog last Groundhog Day. When we separated the second time, ostensibly to get divorced, I had a transitionary period in which I wrote some very depressing things in a little notebook I would carry around with me. I still carry a notebook with me most of the time, but the current one does not have any depressing journal-like entries or poems in it. Had I been doing this blog, I probably would have found excuses to share some depressing stuff... not that there's necessarily anything wrong with that. Hell, some (or maybe all--I'd have to check) of the poetry I wrote then is on my website. But, I didn't have to squeeze it all into Groundhog Day.

I could have, though.

I mean, for the record, I could probably squeeze just about anything into this blog and make a reasonable case for its inclusion. Phil's trying a little too hard the night of the second snowball fight on my TV right now and that makes me think a) of building a snowman as a kid on a visit to Pennsylvania, b) building a snowman with teammates at a speech tournament in Utah two years ago c) the movie Frozen because typing the phrase "building a snowman" twice just now made me hear in my head "Do you want to build a snowman?" and d) the way Phil fell on the ground to be recreate their (presumed) kiss the night of the previous snowball fight makes me think of lying on the ground in a park in San Francisco with my then fiancé more than a decade ago, and that makes me think of how lately I've been wishing I were in a relationship again, and that makes me want to make a point in saying I don't need to be. I've got my grad school work, I've got my coaching, I've got this blog, I've got my kids.*

* pieces of my life listed not by importance by but the way the sentence seemed to flow well.

I wrote--again--about Larry and Nancy possibly getting together yesterday. And, I know in the original (and quoted again yesterday) Larry/Nancy entry, I said, "It’s a nice thought, that any of us can find companionship, in a friend, in a lover, however it may come." 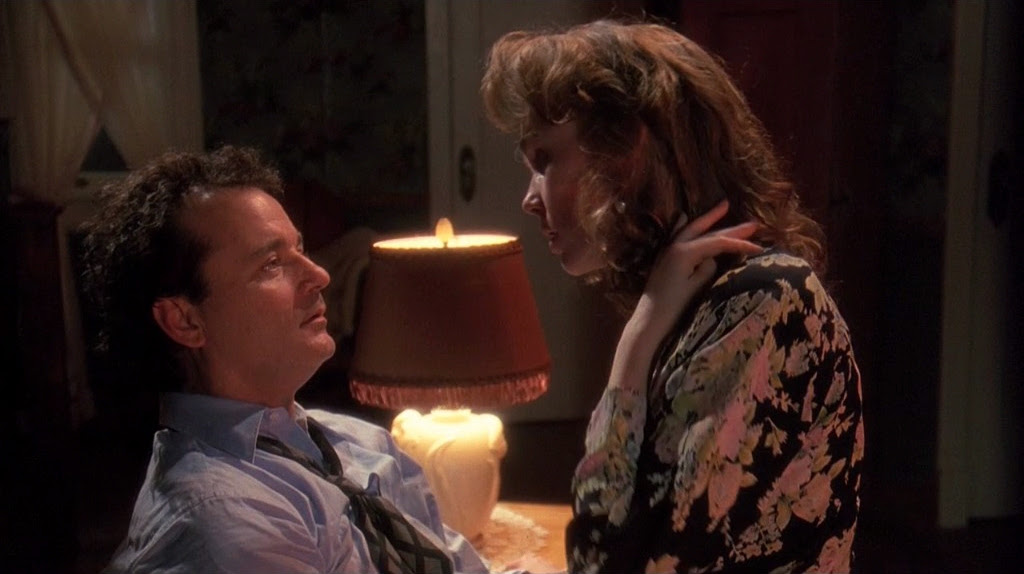 (Of course, then I include that photo which does not really imply "companionship.")

It is a nice thought, though. But, I'm not so sure it's a necessary thought, especially in light of that "however it may come" qualifier. I've got companionship here and there... I don't need a romantic relationship to have that.

Or maybe I'm just justifying my loneliness, another part of me wants to point out. But, that part of me should shut up. Give in to loneliness rather than be happy doing what I'm doing--and I am pretty happy lately--and I'll be all depressed like Phil, though I don't think I'll jump off a tower like he just did on my TV.

Life may be a series of repetitions, going to school, going to work, maybe squeezing in a movie now and then, but, as Dairyu Michael Wenger Sensei points out, while you may "go to the same place, wear the same clothes, and follow the same routine... each moment is unique."

Heraclitus once said something along the lines of "you cannot step into the same river twice." For, the river is ever changing and so are you. Lately, more than once, I've suggested that I am not actually watching the same move every day for this blog. Groundhog Day is actually a slightly different film each time I have it on. I'll focus on different aspects or even see new things, even still. More than 200 days in and I'm not sick of it. Of course, as I pointed out before, Groundhog Day may be that companion I'd like to think I don't need... at least for now.

And, to be fair, not needing something doesn't mean I don't want something.

Today's reason to repeat a day forever: to get what I want, simply, completely.