i surprise myself sometimes

Sometimes, you just have to run with an idea no matter how crazy it is.

Today, I took a Myers-Briggs personality test... twice. And, I wasn't answering for myself. I was answering for Phil Connors, not how he would answer, per se, but what an honest answer would be if I were him. The first test--pre-loop Phil. The second--late- or post-loop Phil.

For the record, I used the Human Metrics site.

A couple of the notable prompts, considering who Phil is and where he ends up:

16. You are inclined to rely more on improvisation than on prior planning.

21. You know how to put every minute of your time to good purpose.

Anyway, Phil's results pre-loop, though I was the one answering for him, surprised my a little. He got ESTP, broken down as follows:

What surprised me was the "extravert" bit being so low. Phil is certainly a guy who wants attention prior to the loop, but thinking about it a little, I realize he's looking for attention more out of low self-esteem than high. He presents himself as an arrogant, better-than-you kind of guy, but deep down he knows he's not that special.

Flexible and tolerant, they take a pragmatic approach focused on immediate results. Theories and conceptual explanations bore them – they want to act energetically to solve the problem. Focus on the here-and-now, spontaneous, enjoy each moment that they can be active with others. Enjoy material comforts and style. Learn best through doing.

Phil is not flexible until he needs to be and he does his best to not be tolerant. But, that could certainly be part of who he pretends to be. He is pragmatic, and theories and conceptual explanations certainly do bore him. And, the rest of it there--that's why he manages in the time loop so well (aside from a little bit of depression).

Late- or post-loop Phil is more of an extravert, thought with a more subdued style. I think that fits with the self-esteem issue; he is loud and obnoxious and practically begging for attention when he is really stuck inside himself before the loop, but later he is actually interested in interacting with others (and still in getting attention) but he has foregone some desperation.

But, of course he remains an extravert. A Paragon Educational Consulting document I have from my classroom management course last year breaks down the various "letters" in Myers-Briggs and the first thing on the list under Extrovert is "learns best from doing." That's Phil in a nutshell. Maybe his learning isn't so obvious at the end of the film, but that's because he's already learned everything. Pre-loop Phil doesn't fit the bill as "more at east and confident socially" but he would certainly pretend to be.

Another page I've got from classroom management is a table from Manual: a Guide to the Development and Use of the Myers-Briggs Type Indicator. It tells us that an ESTP (which would only be 6% of all males) is "good at on the spot problem solving." Phil is certainly practical about solving things once he has figured out what's going on. Case in point: the process I call Phil Connoring. It wins him Nancy, it almost wins him Rita. One of the big changes in Phil is that pre- or early-loop, he would be "best with real things that can be worked, handled, taken apart, or put together." He's a hands-on kind of guy. To pass the time he throws playing cards into a hat. But, in Act Three he's seen sitting around reading, four spare books sitting nearby.

What he gets the second time is ENFJ, broken down as follows:

The Myers & Briggs site describes the ENFJ like this:

Warm, empathetic, responsive, and responsible. Highly attuned to the emotions, needs, and motivations of others. Find potential in everyone, want to help others fulfill their potential. May act as catalysts for individual and group growth. Loyal, responsive to praise and criticism. Sociable, facilitate others in a group, and provide inspiring leadership.

I don't even see a detail there in need of specific explanation, let alone anything that is wrong. I think I nailed post-loop Phil.

According to the page from the Manual, ENFJs are only 2% of males.

Another Paragon Educational Consulting document breaks down the four academic types, and post-loop Phil would be an EN, an "action-oriented innovator." "Projects where [he] can solve problems and draw energy from working with others and overcoming challenges are... areas where [he] feel[s] very confident." Whereas, before, as an ES ("action-oriented realist"), Phil would not be one to sit still for a lecture or a test, and certainly wouldn't have the patience to learn piano and sit around in the Tip Top Cafe reading books.

By the way, according to Barry Ritholtz's "Know Your Myers-Briggs Type Indicator Type" diagram at The Big Picture, pre-loop Phil is more like Winston Churchill, "bold and tactical, with an energy for problem-solving," and post-loop Phil is more like Martin Luther King, Jr., "goal-oriented and caring" and "empathetic." 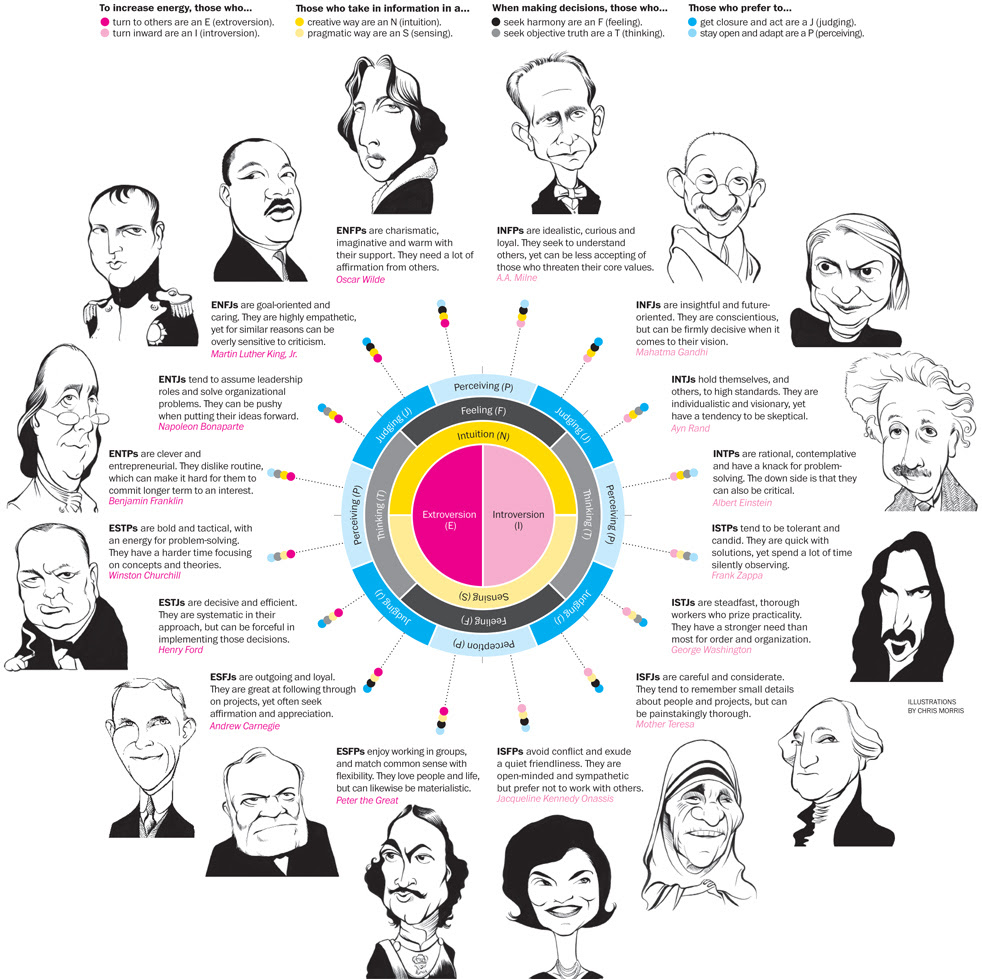 Today's reason to repeat a day forever: to classify every person I meet according the this personality test and every other one... then to throw all that stuff aside and just get to know each person.