academic opinions that are purely subjective

It isn’t that Greg wants something that’s impossible. I mean, plenty of people spend their lives without sex, without physical intimacy. Of course, plenty of people probably live without companionship as well. We just can’t all have all the good things in life. Regular companionship would be nice, even if there weren’t sex. Not that I would go for Greg’s notion of excluding it outright.

A personal anecdote—you know, because that’s so rare for me: being married doesn’t guarantee either of those things, sex or companionship. Long before we separated, my wife and I had our moments of one or the other, or neither. Unlike Groundhog Day’s Phil Connors (pre- and early-loop anyway), I never really wanted casual sex. But, unlike The Mirror Has Two Faces’ Greg Larkin, I also don’t want companionship without. I broke down the successful relationship yesterday into four parts: sexual, intellectual, spiritual and emotional. Those last two are so close together the way I see it, I’m not sure why I even separated them. And, both of them get twisted together in with the intellectual. If you’re doing it right, at least. So, like the dichotomy in this film, it’s physical and mental.

Henderson (1978) tells us, “The sexual question always circulates in romantic comedy, it is its utterance that is forbidden” (p. 21). When Harry Met Sally..., The Mirror Has Two Faces—these movies rather blatantly do what Henderson says is forbidden; they talk about sex. Of course, sex isn’t really the problem in either film. Sex is just representative of something else, a more well-rounded love. Sex isn’t just sex. Companionship isn’t just companionship. Love isn’t just love. Henderson continues:

Not that in romantic comedy resolution of the problem of non-fucking involves both a theoretic question and a pragmatic one (as in psychoanalysis). Determining why we are not fucking and overcoming the barrier by actually fucking are quite different things... (p. 22)

(Is it prudish of me that even as I’m quoting Henderson using the F-word—and it’s not like I don’t use that word in reality, though rarely to refer to the act—I still want to just call it sex?)

—because they are operating under the notion that sex will get in the way of friendship. Greg and Rose aren’t fucking because Greg (but, not really Rose) wants a relationship without sex. The thing is, I don’t think Greg has a relationship that was anything but sex with his previous girlfriends; Henry (George Segal) mentions several names of Greg’s exes, implying they all fell in the year since Candy left him, so Greg, despite his stuffy, somewhat aloof appearance, was, as they say, getting some. But, a series of relationships within a year—I’d wager there wasn’t a lot of depth, not a lot of companionship. I’m still stuck on the idea that Greg, like the professor in Moonstruck went out with students. It was all about physical attraction, sexual passion. And, that got to be too much for him when Candy used him to feel good about herself after her boyfriend cheated on her. He’s not trying to reduce what he has had to something less. He’s trying to replace it, when maybe—and obviously the film is saying as much—that other part of the dichotomy doesn’t work on its own either. Knowing the reason they (he) aren’t (isn’t) fucking is a separate issue from the act itself (or lack thereof). Greg has his reasons. He’s depressed, broken down by failed relationships. Just watch the scene in which he explains to Rose how he goes insane when he is attracted (sexually) to a woman; he’s acting insane in that scene, encroaching a bit too much on Rose’s personal space, ranting a bit more than conversing. He sounds like a guy who hasn’t really thought his new position—the no sex thing—through, but is insistent on it because he just can’t handle, emotionally, taking any other position.

(I would almost accuse myself of the same thing when I insist I am not interested in a new relationship currently, because it’s an excuse more than an explanation to say I am happy with what I have and also busy with my kids and grad school and teaching. Yes, I want a new relationship. Whether I’ve been brainwashed by years of not only romantic comedies but every genre of film (not to mention television and, you know, books... most if not all stories our culture produces) or it’s a biological imperative, or even something more fundamentally me, I do. But, I am also relatively content lately. Occasionally stressed with so much going on, but content. I have people I can talk to about most things. Some of the most personal stuff, not so much, but most things. And, if I can’t find anyone, I can just hide it in plain sight here in this blog and force you all to read it and be a surrogate for something I dont’ have anymore. I’m not even sure I think that’s sad or pathetic or whatever. It just is.

It disappoints me when a girl I’m interested in is unavailable, or loses interest in me. But, I go on. I’ve got plenty of filler to take up my time so I don’t dwell on it.

I just find something else to do. And, I suppose I look forward to not writing about romantic comedies anymore.) 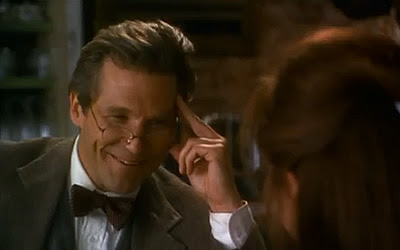 Greg has manufactured a position that is unsustainable. That’s the point to The Mirror Has Two Faces. Just like When Harry Met Sally..., and to a lesser extent Moonstruck, the point is that men and women cannot be in a relationship with any depth without sexual attraction getting in the way. Loretta and Johnny might have stuck out their marriage ‘til death do us part, but would they have been happy? Had Rose not insisted on sex, wouldn’t she have just grown resentful of Greg so that eventually, the sharing and respect he cites as the successes of their relationship would have been lost too?

Dowd and Pallotta (2000) tell us that it is impediments to romance—in the romantic story—that “make the romance all the more meaningful” (p. 552). In a way—and the separation after the attempt at sex just happen as the movie runs tonight—The Mirror Has Two Faces suggests that had Greg gone ahead and had sex with Rose that night, it would not have ended well. The resentment would have been his. We can assume that had sex become a part of the equation of Greg and Rose that night, maybe everything would have been fine, just as we assume it will be after the credits roll. But, in terms of the story, in terms of the structure, the two of them have to have that moment in which things just don’t work. A gradual move into a more well-rounded relationship would make for a boring film. A separation, during which both Greg and Rose improve themselves—Rose by getting into shape, Greg by, well, accepting the idea of wanting more from Rose than the celibate companionship he purported to want before—that is something more moving, something more worth watching. We don’t want to watch a couple come together and then just stay together. It’s, as I already said, boring. Dowd and Pallotta write:

To be of interest to the reader or viewer (and, one might speculate, to the lovers themselves), romance must constitute a struggle against some outside force that, intentional or not, serves to separate the lovers and in other ways make difficult the progress of their love. (ibid)

The key words there should be obvious: struggle and progress. Romance is active, built of and on forward movement. And, it has to be a struggle to mean something. It’s a very American (or at least Western) idea, that nothing means anything if it doesn’t take effort to achieve.

The Mirror Has Two Faces insists on, even as it speaks occasionally against, the idea that romance is a necessary interaction between men and women. Additionally, we all want the rising music, the dancing in the street, the impractical behavior inherent to mindless romance...

Which is an odd phrasing on my part. I think romance, even in the shallowest of romantic comedies, is mindful, not mindless. Or, at least, it should be.

And, what’s wrong with being impractical from time to time, anyway?