The first mirror: Rose’s opening scene. She pulls a Sno Ball out of the drawer, takes a big bite, and in the mirror we see her with a facial mask on. Very cinematically feminine, snacking on junkfood stashed secretly—reminds me of Deputy Chief Brenda Leigh Johnson in The Closer, though that came later—while readying for a date. But, then there’s a baseball right by her hand, the Sno Ball juxtaposed with the baseball, two sides of her character framed within the mirror. And, she has to then choose between those two things a moment later, and she chooses to cancel her date (feigning illness) to watch the baseball game.

Another mirror: before Claire’s wedding, Rose in the pink bridesmaid dress, Claire in her wedding gown. Sisters reflected together. And there’s comment on Rose’s makeup; Claire thinks she isn’t wearing any, but she is.

Next mirror(s): after the wedding, Claire is dancing with a guy (not her new husband, so maybe a bit of foreshadowing of her eventual split from him) in a room full of mirrors. Alex can’t find her a moment later and hits on Rose. Meanwhile, Claire is outside drinking with another man.

The union of souls, that Rose says comes from courtly love, is the same sort of reflection you might get in a mirror. Think of Rose and Gregory—both teachers—as reflections of one another, or two parts of a larger whole—that’s the real romantic idea, isn’t it? Like Johnny’s theory about why men chase women in Moonstruck, romance happens because men and women are incomplete without one another.

Not a mirror, but dinner with Rose and her mother, Hannah (Lauren Bacall) is framed with a photo of her younger self just over her shoulder.

Not a mirror, but in that same scene, Hannah says to Rose, “You’re just like your father.” A reflection, if you will.

When Rose spies on Gregory’s class, she looks through the window and he appears on the other side, looking back, like a reflection.

Next shot, Rose in the mirror at home, putting on makeup. She is framed along with her mother. Then, she goes to the closet and there’s another mirror, full length so we see the unshapely robe she’s wearing. Then, back to the smaller mirror as her mother offers to do her hair. For Rose, the mirror seems to define her. Later she’ll demonstrate concern about how she looked growing up in addition to how she looks in the present. It is the realization that she was pretty when she was young that gets her to go work out and eat better. Like many a stereotypical woman, Rose is stuck on the idea that she isn’t attractive.

Outside, as Rose goes for a taxi, even prettied up by her mother, her reflection is a much younger girl coming out of the building across the street, who one taxi driver goes out of his way to pick up instead of Rose.

A nice mirror shot, after Rose arrives at the restaurant with her hair a mess. As she heads for the bathroom, Gregory watches her go, he smiles, and in the mirror behind him, he puts his hand in his pocket. Maybe it’s just because of a similar move in The West Wing years later but I get the impression that Gregory in that mirror is interested in Rose even though Gregory not in that mirror is not.

Gregory’s book, and his big math thing is the “twin prime conjecture” about pairs of prime numbers. It’s almost too on-the-nose.

At the Christmas concert, Henry arrives with his date, a woman much younger than he is, a reflection of Gregory’s old dating habits even as Gregory sits at that same concert with Rose.

Not mirrors, but I see some interesting costuming things going on. Rose dresses in black, unshapely, not unlike a nun, in front of her class. At the Christmas concert, she’s wearing black. And, Gregory’s coat/scarf combination evokes a Samurai’s (or a monk’s) robe. Even moreso, Gregory’s robe later, after he refuses sex. A scene in which Rose again is dressed in black. A nun and a samurai (monk)—both images of repressed sexuality. 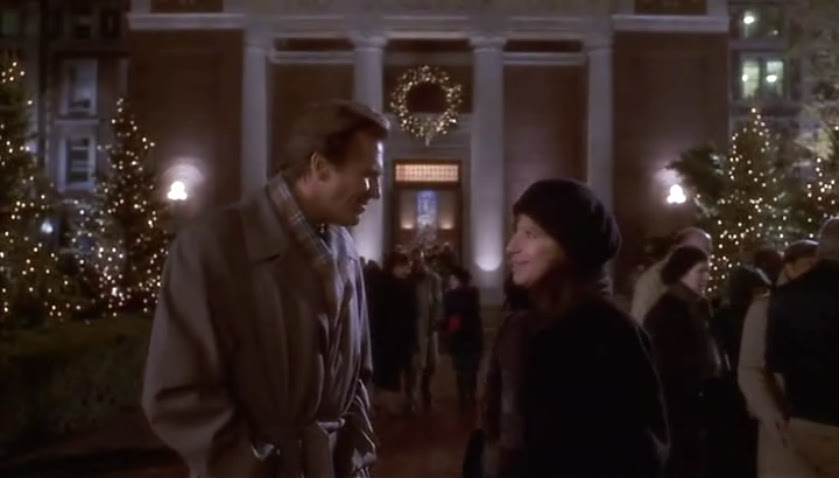 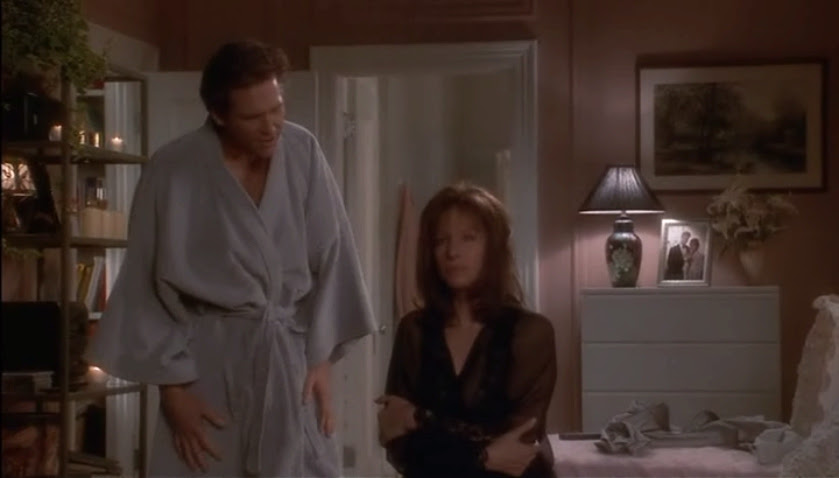 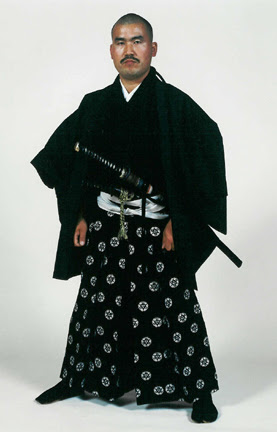 A lot of shots through windows and glass—just now through a pastry display—in addition to the mirrors.

Another mirror, briefly, Doris—good name—reflected, when they’re at the department store.

When Alex invades Rose’s and Claire’s lunch, his tie matches Claire’s outfit. Yet another example of his attachment—which Claire thinks is too much (I wonder if she even noticed the tie).

I’ve already pointed out how Gregory’s proposal scene, however unconventional, plays and is framed like a more conventional proposal scene. Their wedding also quite nearly splits the movie in half, timewise.

As Rose arrives home after the proposal, she stops at the mirror by the door, but we don’t see the mirror image. There is only one Rose in this moment.

And, look at this shot: 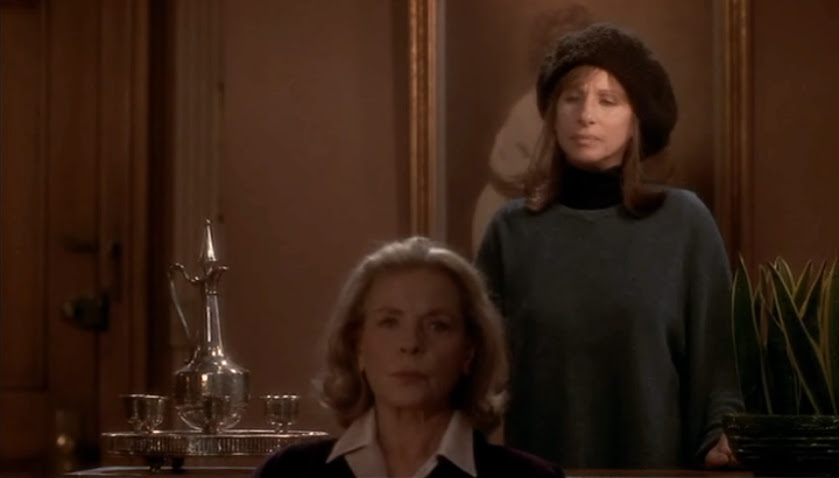 Rose, behind her mother. Behind Rose a painting of a mother and child. And, on the right side of the frame, a plant often referred to as mother-in-law’s tongue (which there was more of in the Tip Top Cafe in Groundhog Day by the way).

Cut from the wedding to Rose placing a photo of her parents onto a shelf in her now shared apartment with Gregory (with twin beds). The new couple, without romance to the old couple, who we later learn maybe wasn’t as great as Rose might’ve though. Her mother tells her, “That feeling that you have for Gregory, i don’t think i ever felt that, not even for your father.”

The park is full of couples in love—even Barry, the guy who Rose was supposed to go out with at the beginning of the film, with a fiancé. Meanwhile, Gregory is writing and Rose is (not) reading. The reflection is flawed. The marriage is flawed as well.

The imbalance of the marriage is reflected (pun unintended) in the costuming; Gregory dons jeans a polo shirt (at home and in class), and a classier suit on their night out. But, on that same night out, Rose is dressed in a black shapeless dress with lace that seems a bit old fashioned (of course, so does Rose’s hair). Leaving to go to the bathroom, Rose checks herself out in the mirror.

Speaking of costuming, the morning Rose warns Gregory about wanting sex, she’s still wearing black, but only a sweater over a white blouse and a long red skirt. She’s branching out... and Gregory is back to looking more like a dorky math teacher, wearing a bow tie.

The silhouette of Rose as she enters the bedroom is again, shapeless (but feminine) and black. But, change the angle and it’s clear she’s wearing a lacy robe over a nightgown, far more overtly feminine than many of her outfits.

Gregory leaves Rose curled up on the floor. When she emerges from the bathroom at the end of the sequence, he is curled up on his bed (he fell asleep waiting for her to reemerge). And, between these two shots we get Gregory on one side of the bathroom door, Rose on the other, then Rose seeing herself in the mirror again. When she leaves, she takes the photo of her parents. She takes marriage with her.

And, back at her apartment, she is in the mirror again. And, now she asks if her mother thought she was pretty as a baby. And, she remains in front of the mirror until her sister is mentioned. Then, she sits beside a photo of a younger Lauren Bacall to continue the conversation. And, she refers to her mother “looking at yourself in the mirror with such appreciation.” Rose’s problem is not that men don’t find her to be beautiful; it is that she doesn’t.

There’s a nice transition from Rose, sitting in her bedroom listening to Gregory’s phone message, to her mother sitting in the breakfast nook. The implication is that Rose will end up like her mother. And this is when her mother reveals that she settled for Rose’s father. She’s jealous of what Rose has with Gregory.

Of course there are mirrors at the gym where Rose works out. A lot of mirrors.

And at the salon where Rose gets made up.

Gregory fixes his tie in the mirror when he gets home from Europe.

(And, the music playing is an instrumental version of You Don’t Know Me, making another connection to Groundhog Day.)

As Rose and Gregory “break up” for the second time now, neither one really resembles their earlier selves. He’s got a less stuffy-math-teacher suit on, and she’s wearing a shapely dress (not to mention the makeup and lightened hair).

Gregory’s problem with baseball before was that he didn’t understand playing a game where you just end up where you started. With Rose’s “What for?” Gregory is back where he was an hour and a half ago. He played a game and he lost.

But, he came out changed. Rose dresses differently for her class, and Gregory is out at a bar with Henry, baseball playing on the television. He’s now more of a man, Rose more of a woman. Hell, out at a bar herself, with her sister, Rose now wears read—earlier red was her sister’s color.

Rose sits at the mirror doing her hair as her television talks about how we all want to be attractive. She seems tired of the idea. She looks at a photo from her wedding. But, then Alex calls.

And, finally, the playing of Puccini while Rose and Gregory kiss is a callback to Rose’s lecture near the beginning of the film—the idea that we all hear Puccini when we kiss.