sit with someone and not have to talk

The old couples are not real, but their stories are. Director Rob Reiner on the commentary mentions having filmed the real couples but they were not as “compelling” as their stories were. 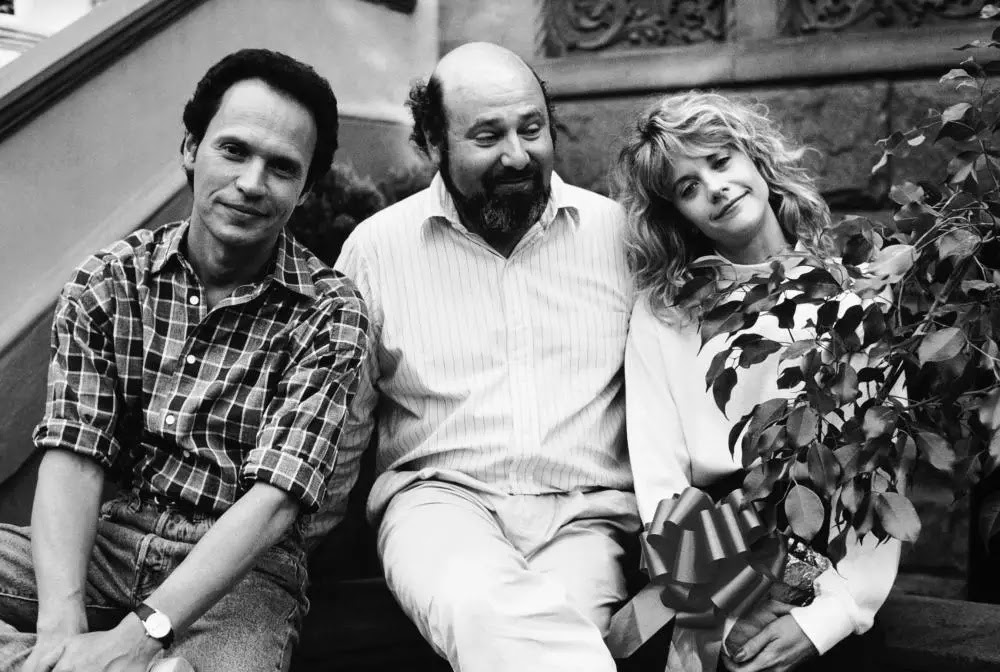 Writer Nora Ephron recounts the beginnings of the film—Reiner had the idea, divorced from Penny Marshall, and handed it over to Ephron to write it. He would end up meeting his next wife during the making of When Harry Met Sally—director of photography Barry Sonnenfeld would introduce them.

Ephron wanted Sally’s (Meg Ryan’s) hair to get younger as she got older.

Spitting at the window then saying he’ll roll it down—that came from and old bit involving Billy Crystal’s grandfather teaching him how to drive.

Ephron orders food like Sally does—she did so at the lunches at which she and Reiner discussed relationships in putting together this story and she says it’s getting worse. Ordering coffee, in a very specific but polite way, from a stewardess once, Ephron was asked if she ever saw When Harry Met Sally.

(Separate from the commentary track, but I’m thinking about it because they were just talking about the way Sonnenfeld shot the film, very simple, letting the words stand. Anyway, as they get to New York, the twin towers in the background are framed inside the Washington Arch. It’s almost a bit too on-the-nose, but it’s an indelible image of the pair framed within a New York landmark. James (1989) compares this film’s use of Manhattan to Woody Allen’s (unfavorably; she calls it a “perfectly pleasant Woody Allen wannabe, full of canned romance”).)

Ephron credits everyone for what’s on screen—she compares it to a pizza with everything. Reiner has his part, Ephron hers, Crystal his, Ryan hers.

For her part, Ephron put a lot of personal stuff in—she says the basic premise of meeting in college, then meeting again 5, 6 years later and then again later came from a guy she knew. The women talking—the rolodex scene—that was personal stuff too.

(To counter the end of that last parenthetical, Karpel (2008) says:

Upon its release When Harry Met Sally... seemed like a shameless Hollywood rip-off of Woody Allen’s masterpieces Annie Hall and Manhattan. There were so many similarities—the Jew-shiksa romance, the lush autumn New York City foliage, the ivory-tinkling Gershwin standards, even the white credits set on a black background. But two decades later, the movie... plays as a loving homage to a director who had already lost his romantic-comedy way. And as it turns out, Rob Reiner’s film about two friends (Crystal and Ryan) trying to have a platonic relationships was ahead of its time.

Reiner even mentions in the commentary that Woody Allen had already shot everywhere in New York so they had to find places he hadn’t used.)

Didn’t get the connection, since I hadn’t placed the years, but Harry is seen reading Misery, which was the book adapted into Rob Reiner’s next film.

The paprikash scene, you can see Meg Ryan look offscreen to Rob Reiner to see if she should run with what Billy Crystal is doing with the weird voice. It’s brief but it’s there.

Ephron interrupts Reiner about the orgasm scene like they are one of the old married couples. She tells the story of how that scene came to be; basically, Reiner questions whether women faked their orgasms, so they went to the “bull pen” at Castle Rock and asked the women there if they ever faked their orgasms, and they all nodded.

And, well after the scene, she backs up to talk about the extras cast in that scene and how she watched the film on a plane once with that scene cut because that’s what got it the R rating.

The old couple who were camp counselors, the ones with the awesome melon line—that’s Ephron’s parents’ story, and Reiner didn’t even know that.

Reiner’s first date with his “now wife” was at the Cafe Luxembourg, where they filmed the double date. And, after filming there, Ephron says, she always had a table there if she wanted it.

(The double date scene is interesting to me on a personal level... Marie connects with Jess (or vice versa) because she quotes something he wrote in New York magazine. Doesn’t realize he’s the guy who wrote it, but quotes it and that’s where the two of them connect. Back in 2001, my then-future (now-past) wife and I connected after I posted to her (on a message board we both frequented) a link to my website where some of my writing was available. Of course, writing—even fiction—is personal, unique to its author (even when it’s derivative), so of course writing can bring people together.)

Discussing the day Reiner met his wife—the day they filmed the scene outside, right after the wagon wheel table scene—Ephron mentions how at a table for 8 or so people, it was like Reiner and his future wife were the only people there, the rest of them might as well have not existed.

Baby fish mouth scene was improvised. And Harry’s date—Crystal knew the actress since she was a little girl so it was awkward for him to “date” her.

I hadn’t noticed until they bring it up in the commentary, after they have sex, Harry’s already got one foot on the floor.

(Are penguins a thing for Reiner? Sally’s got them around her bedroom. Annie Wilkes has one that always faces due south. And he specifically mentions them here.)

The double phone call scene was shot over 60 times—the 3 parts of the scene were filmed simultaneously with the actors all able to hear each other.

The commentary track is nice, like 3 old friends (well, more Reiner and Crystal then Ephron) hanging out and having a casual conversation. The final insight: Reiner didn’t really buy Harry and Sally getting together in the end—the first draft had them not getting together—until he met his future wife during filming. James (1989) presumes a “belief in miracles” on the part of Reiner, but really, Reiner went into this film going through a divorce, and came out, sure, believing in love. I guess I’m in a good mood tonight, because my thought is, what’s wrong with that? I mean, good for him.