it's not really a story

I suppose my problem, having watched La Boheme and seeing which scene they feature in Moonstruck, is that the two don’t actually play well together. On the one hand, you can take the experience of the opera as the thing that turns the heart of Loretta—even though that turn is inevitable from the start because it’s a romantic comedy...

(Come to think of it, the use of Casablanca in When Harry Met Sally—something I never mentioned last week—makes more sense if you consider the original ending in which Harry and Sally remain just friends.)

The turn may be inevitable, but it still needs a catalyst. Ronny’s persistence isn’t enough. But, the romance of the opera works. It’s simplistic. We don’t know—generally—what’s going on in that scene from La Boheme, but maybe we’ve got a vague idea that La Boheme involves love and romance, or maybe we just assume that the opera includes those things. There’s actually some room for discussion of class in this film, though I’m not sure I particularly feel like making just now. In short, the Castorinis—despite something Shanley or Jewison (I forget which) said in the commentary about them living above their class—are upper middle class; they’ve got money. Loretta herself makes a living taking care of others’ money. 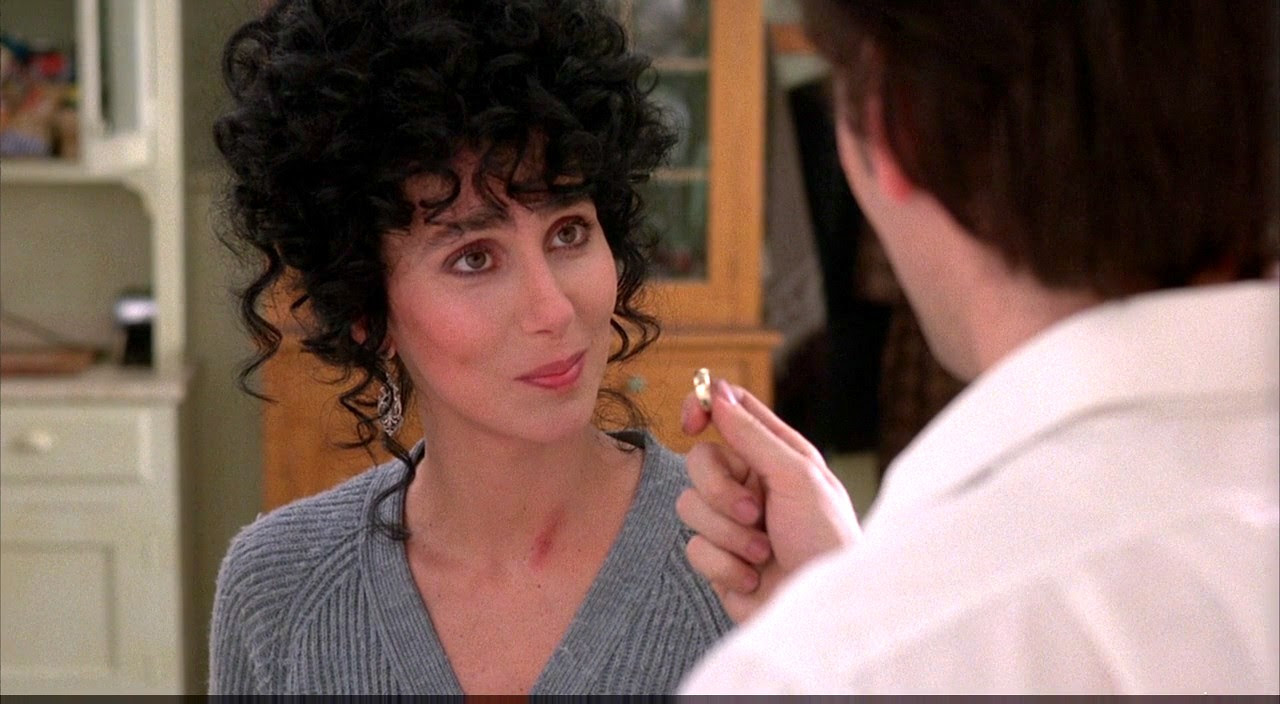 (A question: does Johnny (and then Ronny) offer a pinky ring instead of an engagement ring because he cannot afford something better or because Johnny is ill prepared for his proposal (and Ronny is making everything up as he goes)?)

Dowd and Pallotta (2000) tell us, “Romantic movies valorize the utopian ideals of love and happiness while at the same time incorporating them in the existing system of social and economic relations” (p. 571). The thing is, many romantic comedies—When Harry Met Sally... and Moonstruck being the obvious, immediate examples that come to mind—are set quite securely within the middle (or upper middle) class. Harry and Sally have their jobs and are apparently successful, but we learn almost nothing about what they do. They exist in a comfortable world where they have the time for romance. Shumway (1991) says, “Romance demands not just on desire and affection, but also on isolation from the claims of everyday life” (p. 13). One of the few truly sour notes in Moonstruck for me is the excuse for having the aunt and uncle be present for the breakfast scene. Sure, it’s a nice, but relatively insignificant note, that Loretta may have been so swept up in her pending date that she forgot to deposit the money from their business. But, if she was already so swept up, then her transformation scene with the fireplace and the wine is undermined. That scene works because her stop at the Cinderella Beauty Shop and her stop at the clothing store occur on a whim; they don’t have meaning until she gets home and becomes a new version of herself. Loretta’s forgetfulness serves then merely as an excuse for the Capomaggis to be at breakfast. They are family already; they could have been there without an excuse. And, that missing money is introduced as a problem and then resolved in a matter of seconds; it has no real dramatic weight. But, imagine it came earlier in the film and it kept Loretta from her date. Imagine her work actually getting in the way of the romance. This would alter the film, potentially making it not so easily categorized as a romantic comedy, depending on how big an issue work becomes.

The characters in a romantic comedy may have jobs, but their jobs usually will be distractions at best from the main action—the romance. Loretta is quite secure economically; she’s got a good job and she lives in her parents’ home. She even discusses with her mother the idea of still living there after she and Johnny are married. Ronny, while he presents as more working class, apparently owns a bakery (since the real-life bakery eventually filed for bankruptcy, maybe his bakery isn’t too successful) and is able to just leave in the middle of the day to go up to his apartment after Loretta’s introduction upsets him. His departure is played quite deliberately, actually, so that it seems that his departure won’t even affect the bakery in any significant way. He just puts on his coat and goes. Had he stormed out more angrily, had the other bakers looked more concerned, it may have played differently, but he doesn’t and they don’t. And, the movie’s incessant crosscutting between storylines means there is no real urgency to the conversation that follows either. In fact, the final breakfast scene may be so great because there has been little urgency in any of the scenes prior. It’s been a slow burn to a potential boiling point.

My point is this: the opera is not a working class thing, it’s barely a middle class thing. Because its audience is, so-to-speak, above the moviegoing audience, the opera, regardless of the details, is romantic. Like a trip to Paris or a ride on a gondola in Venice—the romance comes from the impossibility of it happening. For Parisians, Paris is probably not anywhere near as romantic as we think it is. Similarly, Venice for the Venetians. The opera is refined, exclusive to the upper class. The only opera I’ve seen live was Don Giovanni and they had supertitles over the stage, translating the lyrics as it goes. And, maybe all operas do that these days, but for a long time, operas—and keep in mind I’m speaking from America, English-speaking America—were foreign, hard to understand. And, Moonstruck relies on this idea, that the opera itself is romantic.

(And, it occurs to me, since Loretta presumably understands Italian, she would be able to follow the plot of La Boheme fairly well.)

But then, La Boheme actually is romantic. The thing is, the scene we see, which is near the end of Act III, involves Mimi discovering that Rodolfo has only been acting jealous. Really, he wants her to be free to find another man, perhaps a man with money who might be able to take care of her, since she is dying from tuberculosis. In a way, this almost works as a counterpoint to the story of Moonstruck. In this equation, Ronny would be Rodolfo and Johnny the man perhaps more practically equipped to take care of Mimi/Loretta... which actually is rather poetic, I guess... I may have just argued myself out of my own point. (But, no rewrites.) Still, it’s interesting that this particular scene from La Boheme ends on a romantic, but doomed, note—a line I quoted the other day:

We’lll part when it’s the season for flowers again.

Mimi and Rodolfo resolve to separate but then together suggest, “Would you like to wait until Spring comes again?” The cold of winter is not a time to be alone. Hence Mimi’s line: “I wish winter would be everlasting.” In the midst of romance, time stands still. That’s why When Harry Met Sally... can take nearly 13 years, Moonstruck can take 2 days, Groundhog Day can take 1 day (or 1000 years), Before sunrise can take less than a day, and the story plays out much the same—for the audience, each story is 1 1/2 to 2 hours. Ronny just told Loretta, “The past and the future is a joke to me now. I see that they’re nothing. I see that they ain’t here. The only thing that’s here is you... and me.” That, in a nutshell, is the romantic comedy. Worldly pursuits, jobs, day-to-day stresses—these things get lost in the shuffle of romance. The past doesn’t matter, the future doesn’t matter. Henderson (1978) makes a point of how romantic comedies don’t tend to have voiceover narration; “they present what is happening now,” he explains, “ without mediation” (p. 20). Narration involves the frame of the future. When Harry Met Sally... skirts this line a bit with the old couples, but Moonstruck exists solely in the present. Each scene is happening now. In Rent (a modern retelling of La Boheme, mind you), there’s a throughline that conveys this same idea:

There’s only us
There’s only this
Forget regret, or life is yours to miss
No other road
No other way
No day but today

It isn’t practical, but it feels oh so nice.