This entry will be short, probably. First night with a new movie, I want to watch it before I really write about it. Plus, if you need a lot of words, read yesterday’s entry again. 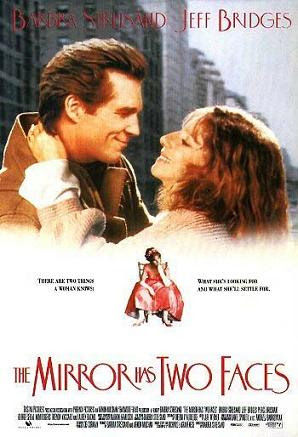 I’ve only ever seen The Mirror Has Two Faces once all the way through. One of my sisters loves it, and made me watch it. I didn’t die.

Of course, to be fair, I think I’ve said before I will watch most any movie at least once. But, sometimes I see a film because of someone else, something I wouldn’t have seen otherwise... Hell, sometimes I do things I wouldn’t do if not for someone else. That’s life. That’s married life, especially.

That last line wasn’t supposed to sound negative. In fact, it’s probably far more positive than negative. Being in a relationship, being married—you do plenty of stuff that single people probably wouldn’t be bothered with. The Mirror Has Two Faces presents marriage like an obstacle to... not love, exactly, but certainly romance. Marriage is often presented as the culmination of romance. The romantic movie ends with a marriage to reify heteronormative norms and all that. We don’t see the marriage, though, because, well, that part isn’t romantic. It’s something more like boring. The day-to-day existence is far less interesting than the pursuit, the chase.

The Mirror Has Two Faces, notably, begins with a marriage. Not too long into the film, Rose’s sister gets married to Alex. It’s a traditional wedding but we see it only briefly. Rose’s wedding to Greg is even briefer and it’s not so traditional. The marriage amounts to a handful of scenes (prior to Rose leaving, I mean). Marry for love, marry not for love, marriage in the romantic comedy—and deliberately so here—means awkwardness (or supporting characters as counterpoint to the leads like Marie and Jess in When Harry Met Sally...). Metaphorically speaking, of course, marriage is death.

Not necessarily in a bad way, though. Rose is obviously in love with Greg well before they marry in The Mirror Has Two Faces, but you can pinpoint the moment, I think, that Greg falls in love—or, rather, realizes he’s in love—with Rose; it’s the moment he watches her ritual eating her salad and he’s figuring it out, figuring her out, figuring himself out, and he’s clearly a little frightened. She leaves the table so she doesn’t see what we see—that he’s lightheaded. By the time of their attempt at sex, we aren’t surprised that he gets into it. But, clearly, he is. And, he has spent the entire film not wanting love... romantic love. I mean, ideally, the thing he does want is something we’d call love. It’s just not what movies call love. The horror for him is that who he was, who he wants to be—these are not who he is anymore. The old version of Greg is dead, or has to be, for him to move on. But, he’s stuck.

The obvious metaphor in this film comes from the title, and all of the various mirrors throughout the film. In the mirror, you don’t really see yourself. You see a reflection and there’s a psychological element to what that even means... an idea you project onto that reflection. But, I don’t want to deal in what’s obvious. I’d rather project onto this film my own metaphor—the death thing.

The French la petite mort... I feel like I’m jumping around here, but bear with me. It means “the little death.” And, it’s a euphemism used for the orgasm. Because after the spiritual release, after the peak, there’s the trough. You come back down—and here’s me being something like romantic—you’re different than before.

Or you’re exactly the same but tired.

But metaphorically, any experience is like that. It’s that same river twice thing. Every experience changes who you are, and the old you dies, the new you is born, and life goes on. Romance, sex, reading a book, playing a game, watching a movie...

As The Mirror Has Two Faces ended, and Rose and Greg are dancing in the street as the sun comes up, I was reminded of something about horror films, how they often end with dawn, the light coming back, the darkness receding. I mentioned it as the movie ended and my daughter laughed and said this was a horror film. It was a joke, but there are a lot of elements in common, really, between the horror film (the slasher film in particular) and the romantic comedy. It’s all about fear. Fear of a killer with his psychosexual fury, fear of commitment to a woman with... well, a psychosexual fury, I guess. It’s the same thing in cinematic terms, a driving force to growth and change for the main character. And, supporting characters will be left behind as the final chase—Harry or Greg running to profess love just as exciting as the Final Girl running away from the killer.

Genres blend together when you tear them apart.

And, words blend together when it is late.