she's dying. but i could still hear her big mouth

The beginning of Moonstruck, during the opening credits that is, they cut between Loretta walking to work and steps in the setup of the production of La Boheme, the posters being put up outside, the truck full of set pieces driving through the streets and arriving at the Met. (This sequence was not, by the way, in the final draft of John Patrick Shanley’s script.) The story about to unfold is framed along with La Boheme, tying the two together. 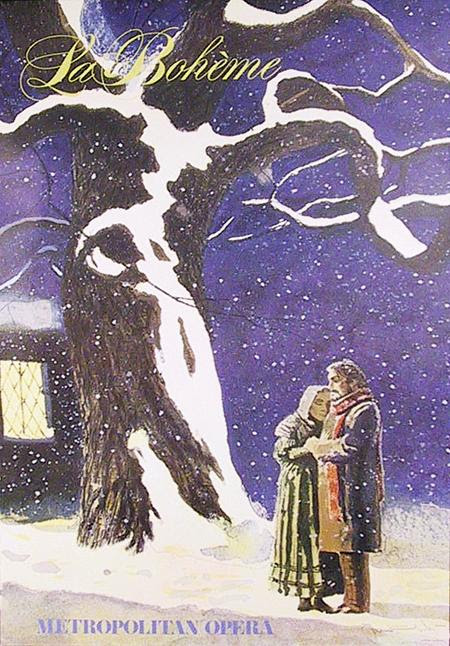 Moonstruck uses opera and La Bohème to illustrate a heartbreaking and even illicit passion between Nick Cage’s character Ronny to Cher’s Loretta. ... As Loretta watches Mimì’s heartbreak unfold, her own heart breaks as she realizes her connection to Johnny is a love she also must leave behind.

I think it’s something a little different, actually. I don’t think Loretta really laments losing her connection to Johnny at all. She has spent seven years as a widow, propagating the idea that her life is full of bad luck. She waited for love to get married, her husband wanted to have a baby right away but she didn’t. He was hit by a bus and, as she tells Ronny, she’s got no husband, no baby, no nothing. No, she doesn’t lament her loss of Johnny, nor even her loss of her husband. Not anymore. If anything, she laments the loss of who she is. Recall her mother’s line to the professor: “I can’t invite you in because I’m married. Because I know who I am.” Loretta, on the other hand, does not know who she is. She just thinks she does. The woman she has been... or perhaps simply the woman she has been presenting as—that woman can no longer be. Ronny has woken something—someone—in her that she has probably not forgotten but has certainly been avoiding.

And, she gives in. In Shanley’s final draft, there is more to Loretta’s dialogue as Ronny takes her to the bed. She says:

All my life I have never reached a man. I knew that I would reach my husband, but I took my time and he was dead...

I want to cut you open and crawl inside of you. I want you to swallow me...

Get all of me. Take everything...

You’re mad at him, take it out on me, take your revenge on me! Take everything, leaving nothing for him to marry! Hollow me out so there’s nothing left but the skin over my bones. Suck me dry!

Loretta tells her father earlier in the film that he looks tired. But, she is only 37 and her hair is speckled with grey. Loretta is far too weary far too young.

I wrote about Loretta’s scene after getting her hair done and going shopping yesterday. I think what is key to that scene is that it plays almost like a love scene, a seduction scene might between a man and a woman—there’s a fire in the fireplace, some nice music playing, she’s drinking—except Loretta is alone with her new purchases. Her new purchases are, effectively, a new Loretta. And, it is not Ronny, per se, who is seducing the old Loretta; it is the new Loretta seducing the old Loretta, finding something like passion still inside her when she probably thought it was long dead, never to return. Ronny woke it up. Like Mimi in La Boheme, previously, Loretta was dying. Figuratively, of course.

And, really, I have little else to say today.

I wish I were more familiar with La Boheme so as to comment on how the specific scenes and songs we see and hear connect to what’s going on in Moonstruck, but I am not. Rent—I know. But, La Boheme, not so much. Maybe there’s a full length version online someplace to watch...