anything you want to talk about

The Mirror Has Two Faces plays like a regular romantic comedy—guy meets girl, guy like girls (or girl likes guy), some manufactured obstacle shows up, but eventually they find each other anyway and all is wonderful. But, it does its darnedest to deconstruct the genre along the way just enough to stand out from the crowd. Still, even as Greg is expressing antiromantic sentiment, scenes play out, visually especially, just like they would in any romantic comedy. Take the proposal scene for instance. Greg and Rose are walking in the park, he’s got something to ask her, so they sit on a bench. They are framed close together on the screen and if not for the exact wording of his proposal and her briefly negative reaction, it looks like any proposal scene in a romantic comedy might look.

At the start of the movie, as I mentioned yesterday, Rose is involved in her sister’s wedding. Meanwhile, Greg’s ex hits him up for some relatively meaningless sex before she sees her new boyfriend again. Then he calls a sex line to talk about women. I don’t think Greg really wants someone he isn’t attracted to; he’s just tired of what’s he’s been doing before. I mean, his latest girlfriend, the aptly named Candy (Elle Macpherson), is 15 years his junior (going by the actors ages)—

(And, maybe it’s just because I was watching Moonstruck last week, with the Professor, Perry, chasing after his students,but I get the impression that Candy might be a former student, but the film doesn’t really establish as much.)

—left him for another man. But, the potentially humiliating factor: he knows she’s got another man but takes her back to his place for sex anyway. He is the quintessential Hollywood man, driven by his sexual urges. But, he doesn’t want to be... Or, he thinks he doesn’t want to be. He wants to have something more chaste, companionship. Or, again, he thinks he wants something more chaste. The movie actually works ultimately to contradict what he says he wants. Rose falls for him early on, he takes longer to fall for her, but he does fall for her. The movie ultimately is just another romantic comedy; it may get the marriage out of the way half way through, but still in the end, it’s the generic Hollywood ending that Rose describes to her class, the music swells, Greg and Rose not only kiss but dance in the street, and we buy into it because we’ve invested a couple hours in these two characters and we want them to be happy. 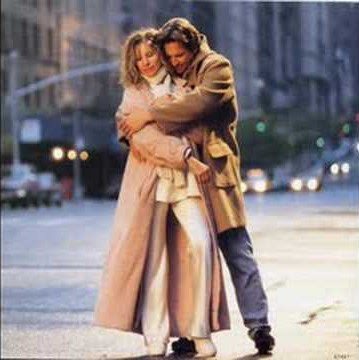 And, we assume that being together, being in love—a love that includes sex—will make them happy. The movie may pretend to be something else, but in the end, it is like every other romantic comedy.

Recall Dowd and Pallotta’s (2000) “cultural norms and rules governing romance that are reinforced in the romantic film genre...

(1) marital fidelity;
(2) the importance of marriage for the right reasons, that is, for love;
(3) the primacy of individual wishes over family preferences in the matter of mate selection;
(4) the importance for the romance of sexual passion, on the one hand, and a sense of intimacy, mutual self-disclosure, and friendship, on the other; and
(5) the integration of the romantic couple as workers and consumers in the existing structure of modern capitalism... (p. 565)

Let’s look at those before moving on to something a little less connected to the film. In regards to The Mirror Has Two Faces, #1 does not come into play on any obvious level. Unless fidelity, i.e. faithfulness, includes not only loyalty but honesty. And, I think it does. Greg specifically tells Rose that their relationship can include sex as long as there is warning. And, she does provide warning. By not having sex with Rose that night—especially after not only she was obviously into it but so, actually, was he—on some level, arguably, Greg has been dishonest, disloyal, unfaithful, and infidelitous.

Regarding #2, The Mirror Has Two Faces insists for much of its length that marriage does not have to be for love. But, really, the entire exercise aims to reify and reinforce the notion that marriage should be for love. Personally, I’d side with a little bit of Greg and a little bit of the ending; I like the idea of marriage that is built on love, but marriage takes so much more than just love, so much more than passion. Rose, her her lecture, refers to courtly romance as “a union of souls.” I don’t believe in any literal soul, of course, but it’s a handy word that conveys a very complex idea of who and what we are as individuals, just like love is really just a word that conveys a very complex idea of how and why we connect with each other.

Regarding #3, The Mirror Has Two Faces reinforces the idea that the individual’s wishes supersede, in this case, her family. Rose’s mother doesn’t trust Greg but Rose marries him anyway. It’s a minor thing here, but it is present.

Regarding #4, the balance between sexual passion and “intimacy, mutual self-disclosure, and friendship” is at the heart of The Mirror Has Two Faces. Recall my entry dealing with social penetration theory—mutual self-disclosure is key to any connection between individuals, but especially for those who intend to spend a longer time together. And, however much Greg and Rose may have intimacy, self-disclosure and friendship, they both still want to sate their sexual passion as well. Greg just can’t admit it. Still we all want both sides, don’t we? I mean...

Well, let’s delay that for another paragraph.

Regarding #5, Greg’s and Rose’s occupations as teachers is certainly more integral to the presentation of their personalities than, say, Harry’s and Sally’s. But, aside from the obvious romantic comedy tropes—I mean that the genre reinforces our modern, capitalist society, and the heteronormative norms that keep us propagating the species (and the society)—there isn’t a lot here that promotes what we might think of as Greg and Rose being workers and consumers. Of course, look to Rose working out and getting her hair lightened and wearing clothes that actually fit her a little better—all of these things, if they don’t support societal norms, certainly stem from them.

But, backtracking a bit, I wonder what’s more important, the sexual passion or the intellectual intimacy? And, really, there are more than just these two elements to a good marriage (or “union of souls”). There’s sexual passion, there’s intellectual intimacy, there’s spiritual connection (and, again, spiritual is just a word for me, but it translates to pretty much what you would expect it to mean), and fairly close to that last one would be emotional intimacy. Having all those things together—that’s the ideal. But, so many relationships lack one or another of these things. Maybe no one thing is the most important, but the more of them you’ve got, the stronger the relationship will be.

I waiver between which one matters. Lately, I think I could go for some companionship, some conversation. And, for the most part, I can get that from the people in my life without having a significant other.

Of course, then the urge for something more than companionship shows up. And, I must ignore it.

Worse maybe than any one of these things not being present is one partner wanting one of them more than the other. One of you wants more sexual passion, the need not being met is going to be a problem. Maybe you won’t end up separated—one of you touring Europe lecturing, one of working out in New York, perhaps—but if the problem isn’t aired, there will be bitterness and resentment. The same goes for intellectual intimacy, spiritual connection and emotional intimacy. If one partner wants something more than it is on offer, regardless of what that thing is, it will be a problem. And, in reality, running across town to find the object of your affection might be too little, too late.

Or maybe you just weren’t all that compatible to begin with. Or, you’ve grown into two individuals that just don’t want what they wanted when the relationship began. Recall, of course, the same river twice thing—you are never the same person, and any given situation is never the same as any other. People change. Needs change. And sometimes they don’t change at the same pace and the situation—the relationship—needs to be redefined to work, or needs to be left behind entirely. We are human beings, with many levels of wants and needs, with far more nuance to us than characters in a romantic comedy...