the past and the future is a joke to me now

Today, some complaints. Or nitpicks, I suppose. One is simply an issue with the time (in terms of setting) of the film, the other deals with character motivations. Both relate to time. 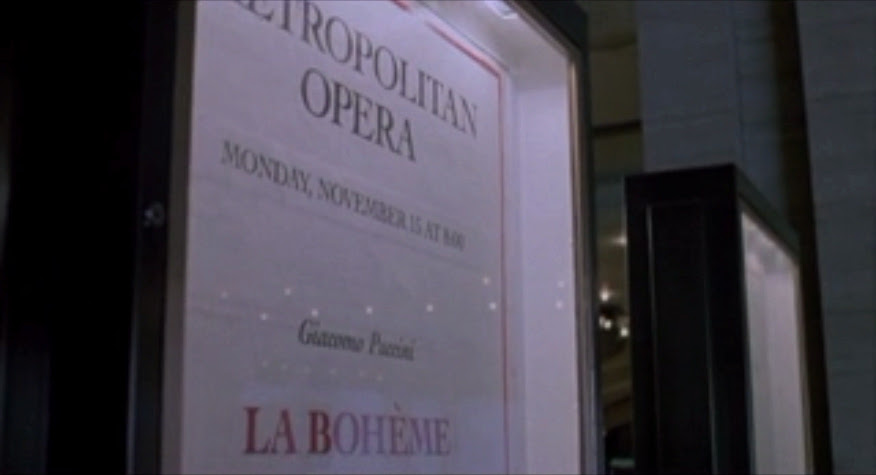 This only bugged me because I was thinking about the timing of the film. Johnny proposes to Loretta on Saturday night, then she drives him to the airport, stops at the store for champagne—where the husband and wife running the place seem about to have a fight until the husband, in response to his wife saying she sees a wolf in him, says he sees in her the woman he married—then she goes home. It’s late; her mother has gone to bed, her father and grandfather are both dressed for bed... actually, as Loretta pours the champagne, the clock in the background says it is 11:25. So, the next morning (Sunday) she gets a call from Johnny asking her to contact Ronny. She calls Ronny and then goes to meet him in person sometime that day (because of what’s coming below, I will give Loretta the benefit of the doubt and say it’s late in the afternoon that she gets to this). Immediately after the scene in which they meet, she goes to his apartment with him. His apartment is upstairs so there isn’t much travel time. Sunset for November 15 in 1987 was 4:39 PM, for 1988 4:38 PM. It is still very much daytime when they exit the bakery, so it is before either of those times.

So, Loretta takes the time to make Ronny a steak before he’s even gotten his coat off. In the meantime, cut to Cosmo Castorini talking to the couple with the plumbing problem—he’s working on a Sunday, which isn’t impossible, but a little unusual I would think—then cut to him out for coffee with Mona. It is still daytime when we get back to establishing shot outside Ronny’s apartment, and clearly daytime outside the windows. It is still daytime when Cosmo drops Mona off, and still daytime when we get back to Ronny’s and they’re drinking whiskey. This scene goes right into Ronny carrying her to the bed. They have sex. Cut to the Castorinis and Capomaggis having dinner. Now it is night. Raymond Capomaggi tells the moon story.

Middle of the night—unless of course the Capomaggis go to bed early, which maybe they do if their deli has early morning hours... but the Castorinis are also in bed by then—Loretta gets up to look at the moon. She doesn’t seem to be rethinking her decision to stay. The scene plays as a romantic scene, her by the window, Ronny coming and standing behind her. It is not until the next morning (Monday) that Loretta regrets staying, regrets sleeping (figuratively and literally) with Ronny.

I know you can regret actions long after they happen. My problem is that Loretta didn’t just end up at Ronny’s apartment inadvertently; she went there deliberately. She made no real effort to fight him off. And, that was before 5 PM. There was either a whole lot of sex or a whole lot of sleeping... or both. They didn’t drink much whiskey—the level of liquid is above the label before Ronny upsets the table (though it doesn’t appear so full for the upsetting, but that’s probably just to limit the mess while filming)—so they weren’t drunk. But, she sticks around until sunrise which was past 6:30. At the least, she’s at Ronny’s for about 15 hours. (Maybe longer, since Loretta’s watch at the church says it’s about ten till eleven.) This is not a casual slipup.

Then again, maybe that’s the point in the larger story—Loretta is doing exactly what she accuses Ronny of having done when he mangled his hand. She is biting off her foot (by not only having sex with but going out on a date with her fiancé’s brother) to get out of the trap of marrying Johnny. But, the film doesn’t convey this very well as it goes. Only in retrospect is it obvious that Loretta was doing that.

Plus, Loretta goes to the Capomaggi’s deli straight from the church (presumably); she has not changed since the scene in the church. She can’t stick around to do the books because she has a lot to do. Yet the film presents her decision to go into the Cinderella Beauty Shop as a whim. Similarly, her stop at the clothing shop. So, I ask you, if she has a lot to do, what is it that she has to do all day? I mean, if she wasn’t planning on getting all gussied up for her date with Ronny. The film plays the sequence—beauty shop, clothing shop, fireplace scene—as a gradual buildup to the date. Loretta doesn’t go into this sequence meaning for it to gain momentum, but romance has a mind of its own, so to speak. I guess that’s why the movie works, actually. It works by not really making sense. Because love isn’t supposed to make sense. Romance is insanity tearing one’s world into pieces and if you’re lucky, it puts them back together in a good way after. Passion is temporary because if it weren’t your life would be constantly torn apart and rebuilt and the stress of that would be terrifying.

And, I cannot decide how cynical that sounded. Do I believe romance and passion are temporary things (followed, perhaps, by something great but built on something... else) because that has been my experience, or because it’s the truth. I gotta throw in Ronny’s speech about love again:

Loretta, I love you. Not like they told you love is, and I didn’t know this either, but love don’t make things nice - it ruins everything. It breaks your heart. It makes things a mess. We aren’t here to make things perfect. The snowflakes are perfect. The stars are perfect. Not us. Not us! We are here to ruin ourselves and to break our hearts and love the wrong people and die. The storybooks are bullshit. Now I want you to come upstairs with me and get in my bed!

He’s tearing down and building up love at the same time. Ronny operates in a world where it’s all or nothing, and he’s had nothing for so long that of course he’s going to fall heavily for the first girl who gives him the chance. Moonstruck is about two desperate people who have spent years thinking happiness was a thing of the past. Everything around them is secondary once they come together. They are like forces of nature, driven by cinematic love to go to bed and damn the consequences. Even Loretta’s engagement to Johnny ultimately is a tiny bump in the road, a bit of Hinnant’s (2006) third model from Jane Austen—the “drama of prior commitment.” Except, this isn’t a drama. Dowd and Pallotta (2000) make the distinction that romantic drama tends to end badly, romantic comedy tends to end well.

Amusingly, my daughter just had a problem with Ronny and Loretta getting engaged after so short a time. But, that’s kind of the point to romantic stories; time doesn’t matter. Everything is immediate when it comes to love. Everything is now.

And, when it’s gone, when your fiancé leaves you because you lost your hand, or your husband is killed by a bus, or maybe you and your significant other just don’t get along anymore, or realize that you never really did, then love is no longer now, it’s never.

Now, that is cynical. And a little depressing.