a spark is fine, as long as it's contained

As this one gets going, I must voice my primary complaint with the first two because really, I wish Katniss (Jennifer Lawrence) had more to do. The problem--the problem with my problem, that is--is that it would be hard to market a story to young readers (and maybe more so the film based on it) in which the main character kills a bunch of other young people, even if she is forced...

In America, at least. I know there are those who call The Hunger Games series a ripoff of Battle Royale, a Japanese manga series (and I believe there's a movie, but I haven't seen it) that is very much about teenagers killing each other. In Japan, you can have that plot more readily without it bothering the masses. Here, we want a heroine who only kills the bad guys or maybe even avoids killing because she's smart. The Hunger Games are a situation that doesn't give Katniss that out. (Except the specific description of the Morphlings in Catching Fire suggests that they both won their respective Hunger Games by basically hiding until everyone else was dead, so it is possible to win without killing.)

Still, the specific plot beats of The Hunger Games make it so that Katniss does not actually have to kill many people. She only directly kills Marvel (Jack Quaid), the one who kills Rue (Amandla Stenberg). She does also drop the Tracker Jacker hive onto the Career Tribute group, which does lead to a death or two, but that actually proves my point; she only indirectly kills them, and that idea comes from Rue. Katniss is cushioned from the guilt. With her prowess with a bow, she should actually be quite lethal in the Games because she would be able to kill from afar, but with that bow she only sets off an explosion that kills no one and shoots Cato (Alexander Ludwig) in the hand so that he can (initially) be killed by the Muttations. Then, when it has become an act of mercy, she shoots Cato again to kill him.

Katniss has skill, is fairly smart, she volunteered as tribute, and she is willing to openly defy the men in charge of the Games and the status quo in which the government occasionally clamps down on its citizens with force. But, so much of what she does--and, for the most part, I would suggest that this is quite deliberate--is instigated by others. Even when she kills Marvel, she is acting on impulse to defend herself and Rue.

As for Catching Fire, that Katniss has no control over what happens to her is pretty much the point throughout the entire story. She begins on tour as a Victor, then she is forced into another Hunger Games, and then she is specifically left out of the the plans for revolution. Just as she volunteered on behalf of her sister in the first film, here she comes between Gale (Liam Hemsworth) and a guard whipping him...

And right now in Mockingjay, they're commenting on how the good parts of the previous stories were when Katniss wasn't told what to do. This is in danger of getting a little too meta... except the idea came from Haymitch's (Woddy Harrelson). So, her unscripted moments to come happen because of Haymitch, just as she ran for the woods at the start of her first Hunger Games because he suggested it. 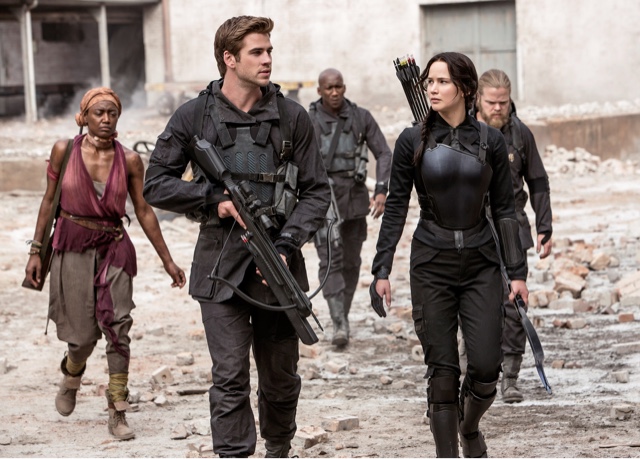 But, back to Catching Fire, Katniss gets to kill some mandrills and a jabberjay to demonstrate that she can kill. I'm not sure she actually kills any of the other tributes, though she probably injures a few in that big fight by the cornucopia.

In Mockingjay, fifty minutes in, Katniss killed deliberately, but it was impersonal--a hovercraft--and justified--they had just been bombing a hospital.

A blog called The Last Psychiatrist describes the overall situation (though the author is specifically referencing the first story) of Katniss' life as a character (after discussing the feminist problem of fairy tales like Cinderella or Snow White or Sleeping Beauty having protagonists whose lives are rarely under their control):

The Hunger Games has this same feminist problem. Other than the initial volunteering to replace her younger sister, Katniss never makes any decisions of her own, never acts with consequence--but her life is constructed to appear that she makes important decisions. She has free will, of course, like any five year old with terrible parents, but at every turn is prevented from acting on the world. She is protected by men--enemies and allies alike; directed by others, blessed with lucky accidents and when things get impossible there are packages from the sky. In philosophical terms, she is continuously robbed of agency. She is deus ex machinaed all the way to the end.

Hell, I just realized that with Peeta (Josh Hutcherson) stuck in the Capitol, Katniss is even robbed of the choice between Peeta and Gale. And, now, when Peeta is likely to be killed, Katniss doesn't even go to save him. Gale does.

Then Peeta strangles Katniss. Didn't figure on such direct violence from him. Not sure how to take it in terms of the topic so far.

And, we end on Peeta. We'll see how Part 2 goes next weekend, I suppose. Maybe Katniss will get to do something more useful.