you're better than this

It was only this morning, going into the afternoon, but I cannot recall the exact order. Two things that twisted together into an idea to explain something here in this blog. The first (or second) was someone posting some photo on Facebook and referencing Barthes' punctum. The second (or first) was that I was watching last week's episode of Showtime's The Affair and Noah (Dominic West) is drunk and starts to make out with his publicist and... sure he had an affair throughout the first season (that was the setup for the show, of course), and much of this second season has been about how the various characters circling around the central couple(s) are all imperfect, they make mistakes, and sometimes things turn out okay anyway. But, here--and I've written in this blog before about how I can get attached to characters fairly easily sometimes--I was mad at Noah because this seemed like one mistake too many when he is supposed to be... or maybe I just want him to be a better man than that. When a character I like does something stupid I feel it. And, though Barthes was writing about photographs in La Chambre Claire, I think that term of his--punctum--describes well the thing I look for in a movie (or in a TV show), the thing that grabs me and pulls me farther in than I was before and ensures that this particular story is going to stick with me.

Before moving further--hell, I have not even mentioned a movie yet--I suppose I should define, as I understand it, punctum. The word itself is apparently latin, simply referring to a singular point or place. For Barthes, a photograph could be understood in terms of the studium--the range of meanings that come from, say, society, that can be read in a particular image--and punctum--the singular part of the image that draws you in. I don't have access to Barthes' original at the moment but Fried (2005) writes about how the punctum "pricks" or "wounds" or "bruises" the viewer. T

Today, for example, those moments when I forgot I was watching an animated film about a dinosaur and a caveboy (The Good Dinosaur) and instead actually cared about the characters were great moments. Captivating, even. It's a thing that never happened during, say, Ginger Snaps 2 yesterday, but was certainly present in Ex Machina, a thing that happened back when I was a kid and saw Wisdom but not when I watched it again this past week. It is something that Groundhog Day managed to do for me time and time again during phase one of this blog.

Lately, I've drifted in this blog through films about people becoming... other people, or becoming new versions of themselves. Coming-of-age films, regardless of the actual age of the characters involved. The Good Dinosaur is no different. Arlo (Raymond Ochoa), after the death of his father, must figure out how to deal with things himself. It's a basic plot. Many a story can be layered onto it. And, we can generally relate to it, because we've been there. Whether you're talking puberty or any other necessary instance of change in life, at some point we have each had to deal with such a thing... which sounds like such a generic line. But, that is kind of my point. 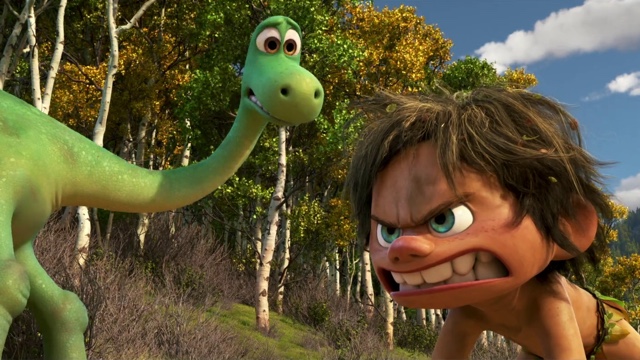 At the moment, I am less interested in banal generalities, though, and more in the punctum. The moments that really mean something... I have a feeling that I will focus in on that sort of thing in the coming month of movies.

Or, I'll just do the usual. But at least I've got some new terminology to reference.

Figure on werewolves finishing out November, with Groundhog Day interrupting on the 2nd. Then, werewolves might linger for a bit and then... whatever.

And, I didn't even come up with an excuse to mention Dreamcrusher, who can protect you from having unrealistic goals.