i wanna hear you say it

Howard Deutch starts his commentary track for Pretty in Pink by talking about his director of photography Tak Fujimoto. Then he talks about the importance of the father/daughter relationship in the film and he talks about the film being like his "first girlfriend." Meaning: he remembers specific details about the making of that he doesn't about other movies he would make later. Like the fact that the intro shot of Duckie walking down the hall was left out of the first edit and he had to tell the editor to put it in there.

Deutch thought James Spader was an obnoxious creep, but didn't immediately realize that would make him perfect for the part of Steff. John Hughes got him to cast Spader.

Improv note: Annie Potts as Iona, saying "It's so... modern."

Deutch says, "Jon Cryer, in this part, transcends acting." He's "channeling" this person. (Except, not quite because Deutch and he had a system called a "boner meter" for Deutch to tell him just how much confidence he should have in a given scene.) Duckie's voice--and I'm pretty sure he means the figurative voice, not the literal one--Deutch says, is what this movie and all Hughes' movies are about. He promises to come back to that point...

...and then he gets distracted by the library scene and how girls would swoon when they saw that scene.

The scene with Duckie and Andie's father, Deutch thought should maybe have more action to it, but Fujimoto convinced him to ground it with them just sitting there. Which really makes it work far better, I think. 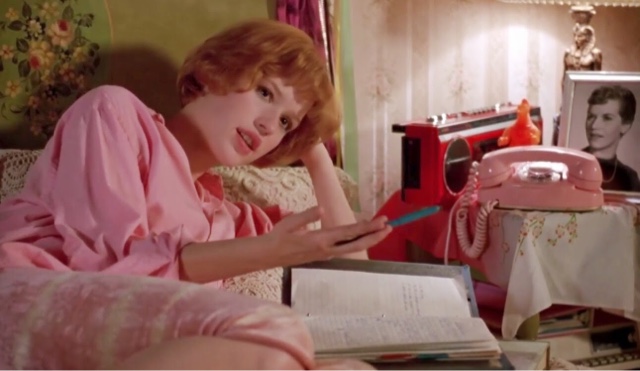 A thought occurs to me as Deutch shuts up for a while: if Blane and Andie were an OTP--

(If you're new to the whole idea of shipping couples in movies or TV, that's a "one true pairing" you troglodyte. For the record, my first brush with such a thing came with The X-Files some twenty years ago now. I was one an early member of both the Official and Unofficial Fan Clubs. And, Mulder Scully shipping was, you know, a thing.)

--then their ship-name would be "Blandie." And, that totally works because they are a bland couple, to be sure. Andie and Duckie, on the other hand, would be "Anduckie" which a) is slightly more interesting--Blandie might be more... catchy? but Anduckie is more unique, and b) it doesn't contain "bland."

Sidenote: this commentary track--when Deutch bothers to talk, which is really not as often as he should be talking--is like a love letter to his director of photography. He just brought him up again when the camera pulled back from Iona and Andie dancing.

To be fair, he also mentions the set decorator (one of them, anyway) Jennifer Polito, and his "AD" (actually credited as "first" assistant director) Stephen Lim, and the editor Richie Marx, for saving his first feature directing gig. He credits them with a lot of what we're seeing on screen.

"We were all just scared of this scene." - the scene between Andie and her father in which they finally talk about the mother. Took about 18 takes. Deutch "can't even watch this scene now without feeling drained."

Sidenote: were vests really that popular in 1987? I'm trying to remember. Just now, there were like four vests out of about eight people in the hallway at the school. That's a lot of vests.

Rehearsing, Andrew McCarthy got black and blue from Molly Ringwald hitting him.

Yay! They knew the dress was ugly.

And, on an unexpected personal note--I like Duckie more today than I did yesterday.