i don't get caught up in all that stuff

Something interesting about yesterday's movie--Can't Buy Me Love--and today's--Lucas--that many people wouldn't notice is the opening shot. Can't Buy Me Love, you might remember, starts with Ronald on his riding mower, except not quite. It actually begins with a shot of cactus in the foreground, a little bit of sky above, then Ronald comes into view in that gap between the cacti.

(There's a nice echo in that the movie also ends with Ronald on his mower, of course.)

And, this movie begins with a closeup on a bug. The title character (Corey Haim) is fascinated by insects, of course. And, insects will be important at a couple points later in the film. But, also, these visuals make for some simple metaphors--Ronald (and his friends as well) is like cactus; other (more popular) people don't want to get close to him or be around him. Similarly, Lucas is an insect--most people just don't want to be around him. (Hell, his nickname is Leukoplakia, which is a mucous membrane disorder that is tied to mouth cancer). Neither of these characters are entirely friendless, though.

(Sidenote: it surprises me to realize that Jeremy Piven got started in acting through teen movies, this one then Say Anything. I don't think I really knew who he was until maybe PCU or Cupid.) 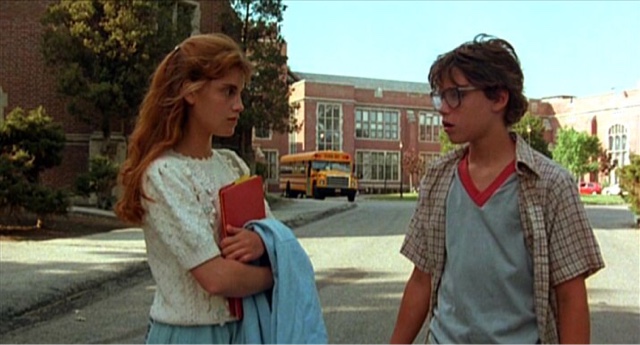 And then came the part of this blog entry when I sat here watching the movie without writing anything. Until they got to the laundry scene and I noticed what looks like a really bad attempt to cover up Charlie Sheen's tattoo on his arm. That got me to turn my attention to this screen and I realized I wasn't saying much. There is room for plenty with films like these 80s high school movies. I mean, I spent a month on them before, watching Porky's, Fast Times at Ridgemont High, Ferris Bueller's Day Off and The Breakfast Club for seven days each. You can see the recap with all the links here. Just the choir room scene alone I could probably write an entire essay about, how a single tracking shot frames the relationships among these main characters almost too perfectly, but doesn't linker long enough to seem silly and, also, ends on the bitter note (no pun intended) of Alise (Courtney Thorne-Smith) noticing that Maggie (Kerri Green) is looking at Cappie (Sheen).

I could probably turn that one kid's line about how you "don't kill yourself over a dental technician" into a multi-day treatise on classism. As I mentioned yesterday, the class divide is vital subtext (but rarely overtly in the text). Cliques get more textual play, but the two are inherently tied to one another, existing as the same sort of divisions at a societal level (class) and the high school societal level (cliques).

(Imagine the entry(s) I could get from Lucas' line, "If you're so depressed, how come you're eating pizza?")

And, now Lucas and Noni (Winona Ryder) had to go and talk about "something ugly" turning into "something beautiful" when he's got a dragonfly nymph in a bottle. The whole "Ugly Duckling" Cinderella vibe is important to so many of these movies... or rather, these movies are the ones with that vibe--it's where I'm stuck for now. Got a few more lined up, then I will follow some tangent away from these.

In the meantime, I find myself wondering how this story would work if, say, the character of Noni didn't exist. She's a plot convenience, reminding me TV Tropes' pairing the spares. We don't have to feel too bad for Lucas because we know from that first day of school early in the film that Noni is there, pining for him like he's pining for Maggie. Supposedly some beats of this story are based on writer/director David Seltzer's own youth. But, he told the New York Times, 27 April 1986, that there was a girl in his youth, "somebody I adored who delivered a crushing blow by turning her back on me and informing me her friendship wasn't all that I interpreted it to be." He didn't mention any second girl who was there to pick up the pieces. Noni seems like a cinematic convenience.

There's no equivalent in Can't Buy Me Love, there's an obvious one in Some Kind of Wonderful, and Pretty in Pink subverts this idea a bit... but I will get to those movies another day.