life itself is a stupid tradition

A streetsweeper, a not-so-great neighborhood, the tracks that I'm guessing we're on the wrong side of. Establishing shots to set us up for...

Hm, montage of closeups as Andie Walsh (Molly Ringwald) gets dressed. Outfit seems much fancier than the house or the neighborhood, but the it is the 1980s and consumerism is rampant. Even working class folks need to look good.

Of course, Andie claims that she spent $15 on the shoes and made the rest. (No mention of what all those different cloths or patterns might cost.

Then, Duckie (Jon Cryer). He dresses like the male version of Andie but he's got an awkwardness to him that seems to turn her off even though they seem to be friends.

Oh, it's Pretty in Pink today. And, I'm not in the mood to write. Bad night.

i can totally relate to Duckie, though, pathetic guy who likes an unavailable girl a little too much. And, doesn't fit in with much of anyone. Andie's admiration of the rich people's houses and her wondering what it's like inside--I don't necessarily care. I mean, I like nice houses, but I don't think I've ever really wanted to be rich, exactly.

By the way, Blane (Andrew McCarthy) might actually be a bigger dork than Duckie is. But, Andie dresses like a grandmother, so she probably deserves a dork for a boyfriend.

My choice would be Steff (James Spader). At least he's interesting without being a pretentious proto-hipster. Sure, he's an asshole, but shouldn't Andie be trying to get out of her dorky life?

I remember in a cast reunion piece in Entertainment Weekly--don't remember when--Molly Ringwald suggested that Duckie would have come out as gay since the events of this story. I think the echoes of this film in Some Kind of Wonderful put in an interesting (and, to be fair, not new, though I neglected to mention it the last couple days) light the scene with Watts staring at Amanda Jones in the locker room. Imagine Some Kind of Wonderful with all the same story beats up until that scene but made, say, 20 years later, and that scene could easily be taken for Watts' jealousy arising not from her interest in Keith but, yeah, in Amanda. Similarly, yeah, Duckie is framed how the gay best friend would be in the 90s. Like Rickie Vasquez in My So-Called Life, but without all the pathos... Except, right now, as Duckie is lipsyncing "Try a Little Tenderness" and dancing in the record store, I'm worried he might have a brain tumor.

Also, someone... maybe me... someone should run Pretty in Pinkright alongside Some Kind of Wonderful to see how much the latter follows the former beat for beat. Though, I can't imagine Blane's friends planning to beat up Andie.

Duckie in the rain is such a... or should be a sad shot, but this isn't Duckie's movie. He's framed like an afterthought that we're supposed to feel sorry for. In that regard, Watts is a far better character than Duckie because Mary Stuart Masterson actually gets us to care about her, while Duckie is just a little too odd. 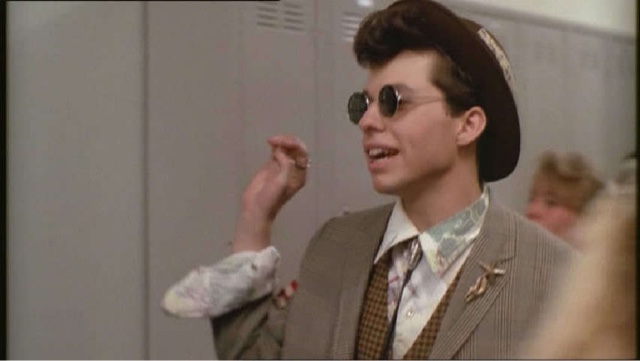 At the point that Duckie blows off Andie and Blane and admits he wants them to leave the club--I am having trouble remembering why I (or anyone) ever thought Andie and Duckie should end up together.

Meanwhile, I just found "The 50 Best Romantic Comedies of All Time" at Paste Magazine, which has Pretty in Pink at #35 (for the record, Groundhog Day is at #34 and should be higher), and I'm not sure I agree with anything that Bonnie Stiernberg has to say about the film (maybe the bit about her dad). This is what he says, by the way:

Let's ignore the fact that she ends up with the wrong guy in the end (Team Duckie for life!) and examine what makes Pretty in Pink's Andie so impossibly cool: She works in a record store and had killer taste in music. Her outfits are daring and incredible. She brushes off insults from evil richie-rich Steff (James Spader) like they ain't no thang. She supports her deadbeat dad and essentially serves as head of their household. But most importantly, she's the picture of courage, staying true to herself the whole way through and never changing to please Blane and his wealthy friends--and if there's any single movie character teen girls should be modeling themselves after as they attempt to swim the treacherous waters of high school without drowning, she's the one.

No. Just... no. She dreams of being rich the same way Duckie dreams of being with her, driving past the "richie" houses like Duckie rides his bike past her house. There's no courage in looking past the friend who's obviously in love with you to latch onto the first acceptable guy who asks you out. And dressing like Dorothy from Golden Girls is not daring. It's conservative and almost deliberately boring. (Her moment in the fancy dress store plays like Vivian Ward from Pretty Woman should be shopping right next to her and being just as shocked by the pricetags.) The best thing about Andie, though, is that she doesn't fall for "let's go upstairs" or "This is going to happen." At least there's that.

In the end, watching Pretty in Pink after Some Kind of Wonderful makes me question the ending of the latter. I mean, while the kiss in the garage is hot, and Watts clearly likes Keith, I'm not sure there is ever any reason to think Keith likes Watts prior to the sudden realization in the end. And, sure, he may have a sudden realization of it, but the movie should clue the audience in ahead of him. Really, Keith likes Watts along the way about as much as Andie likes Duckie. Maybe Keith should have just stuck with Amanda and Watts and Duckie could have run off together to, well, probably pursue other people, because they would have nothing at all in common. Bad idea, actually.