programmed to be heterosexual

Let us interrupt the argument regarding gender and sexuality for a for-instance:

WARNING: there will be some naked female flesh in the skin scene. I considered making those images only visible if you click to see them, but I felt that would actually undermine what I am trying to say about that particular scene, especially when compared with the clothing scene earlier in the film.

On to the first scene. For context, Ava tells Caleb to close his eyes and then she leaves to a closet, where she selects a dress.

She picks out a dress.

She models it in the mirror—but we do not see that mirror; we remain close on Ava.

…before bringing it down over her body.

Then, it is time for the stockings, and I am reminded of that bit in The Private Eyes when Inspector Winship (Don Knotts) gets excited at Phyllis taking off her stockings.

Wig selection. And, it is one of the interesting things about this sequence that she chooses the wig that she does. Neither of these longer wigs will do. She goes with short hair. This is a) an indication (LEVEL 1) that she is just as privy to Caleb’s pornography profile as Nathan is or b) the movie is already angling in a (supposedly) feminist direction with the shorter hair (LEVEL 2).

Here is where Ava got the idea for her hair choice, I suppose. Did Nathan give these images to her? (Sidenote: note the crowd scenes. She indicates to Caleb that she wants to go where there are lots of people to observe and, in the end, that is where she ends up.) That image by the way: 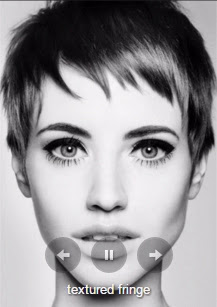 Found that image at salonmoxi.com, in a piece about “New Styles & how to Grow Out Short Hair.”

Now, before we move on, consider, if you have a moment, this video: 1950s Educational Film “How to Undress in Front Of Your Husband” mp4. (Note: its copyright seems to actually be 1937.) First, note the peculiar fact that this video is sponsored by a beer. And, among other things, in its opening text crawl, it asks, “But how about our women? Do they satisfy?” And, there’s this: “With all these modern disadvantages, science has done nothing to make marriage safe for husbands.” That is already some serious misogynist (or, recently, Meninist) bullshit. But, then it goes on:

The old marriage institution has limped along for centuries, burdened by boredom—men have submitted, suffered and supported long enough.

Therefore:
We have decided to do our bit toward the relief of marital boredom.

LESSON ONE.
-TO THE LADIES-

”HOW TO
UNDRESS
IN FRONT OF
YOUR HUSBAND”

Then there’s a sequence about peeping toms for some reason. Ah, because we are the peeping tom as far as this footage is going to go. And, then we (pretend to) spy on a couple women undressing, no husbands to be seen—I think someone forget to connect the content of the video to its intent. And there’s this from the narrator:

So, let’s settle, here and now the question of how and how not to honor your husband. Down through the ages, women have paid meticulous attention to the matter of dressing. They have consumed hours and hours in getting just the precise affect desired. Each dainty garment has been donned with the utmost care and thought. No amount of time or effort has been considered wasted and the final result was alluring glamour.

But ladies… when it came to undressing, that was something else again. Technique was thrown to the wind. Angles were disregarded. Charm and allure were entirely forgotten.

It is so sad that women had not been concentrating on “technique” when it came to undressing. So sad, indeed. Fairly sexist as well. But really, who is surprised?

Still, the point is this: this video—or the imagery that went into it, is exactly the sort of thing we see in commercials, TV shows, films… recall that scene I wrote about last year from Moonstruck, Loretta (Cher) completing her transformation for her date by settling in by the fireplace with a glass of wine to slowly get dressed. Getting dressed makes the woman in cinematic terms. Getting undressed, on the other hand, is something else—it is sexual. And, while Caleb does try to see what Ava is doing when she leaves to dress, he cannot see her from that angle. But, he does watch her undress on the monitor in his room.

And, from other clues throughout the film, and how she specifically moves more into the light of the window here, she knows he can see her.

The dressing and undressing play as sexual. She is dressing the part of human female to entice Caleb. Now, I do not think that Ava is simply using him the entire time, though that would clearly be Nathan’s cynical take on the situation. Still, she is clearly manipulating Caleb’s attraction to her if only to learn more about him as he is learning about her.

But then there is the second “dressing” scene. It is framed between two shots with a painting on the wall—a woman in white, something like a wedding dress.

In fact, I just looked it up and it is a Gustav Klimt painting of Margaret Stonborough-Wittgenstein, daughter to Karl Wittgenstein (who is referenced in the film), a portrait commissioned on the occasion of her wedding.

But, as it turns out, Ava is not marrying anyone. The placement here, as well as Ava’s later choice of a white dress plays as irony.

Note the use of reflections throughout this sequence, and not as many close-ups. All of Nathan’s broken women are coalescing visually into just one complete individual who will get to venture out into the world.

Notable close-ups in this scene come when Ava replaces her damaged arm.

And when she interacts using her new skin. Though she touches the other AIs face here, and it is explicitly sensual, it is not sexual.

The pace, I think, sets these frames as something different from the previous dressing scene. Or maybe it is just that the previous embodiment was a put-on, a façade. Here, Ava is literally completing herself as a woman…

More mirrors, not to mention the reflection of Ava in the other visible AIs.

Now, the film could have spent more time with the dressing, show all the pieces of skin, give us numerous (bordering-on-exploitative) close-ups. Instead, after a cutaway—Caleb is watching this entire sequence—Ava has all of her skin and new hair. No longer the short hair… which maybe was not invoking a feminist do, as it were, but rather something like a slave’s hair, shorn to dehumanize. Though Ava could put on a dress, she (LEVEL 1) could not complete the look with “proper” hair before, or the film (LEVEL 2) could not, so this final version of Ava would be even more dramatic.

More mirrors, but this time used to visually divide Ava, and to take us from a potentially voyeuristic position to something more closely approximating her POV as she looks in the mirror.

One last look at the AI whose skin she has taken. The interesting detail here: that the head that was positioned facing forward is now positioned as looking at Ava. There is no indication that this AI is operational—in fact, Nathan’s description of how he recycles the brains suggests that she cannot be--but in this shot, the two of them seem to be looking at one another.

Finally, Ava closes the closet and there is only her.

Now, this is the part about which some have complained. On IMDb and in comment threads elsewhere. I think the complaint stems from an inaccurate (I think) equation of nudity and sexuality, that being unclothed is inherently sexual and this lingering is exploitative and gratuitous. But, Ava needs this moment. She needs to see her self and recognize it. She needs to be complete.

Then, of course, she must again dress up, because the world requires it. She finds this white dress on one of the AIs.

And, you can see she is multiplied in the mirrors again before she leaves. And Caleb looks on.

She passes the Klimt painting again, this time matching it visually.

You may disagree, but I think the remarkable thing about these two sequences is that the one with no skin, only clothing, is the sexualized one, filmed in such a way as to accentuate Ava’s feminine curves. She is readying herself for a “date” of a sort, and the sequence is filmed that way. But, the sequence with all the skin, on the other hand, has little that could be called sexy or sexual in it. It is more matter-of-fact. This is a necessary evil rather than a chosen one. And, Ava, complete, leaves the house.