feel bad for yourself, man

Yesterday, a few minutes of this movie boiled down to more words than I usually go for in this blog. And, I am tempted to do things like that again, see the trees instead of the forest, as it were. Like, for example, a single shot--Kyoko sitting in the hallway with her shoes off. Or Ava presenting her drawing to Caleb like a child showing off to a parent.

And, maybe I will get to another breakdown like that, with this film or another. But, today, I want to deal with something less cinematic, more... philosophical, political.

Natalie Wilson at Ms. Magazine says that Ex Machina "explore[s] sexuality and gender in intriguing ways, but fails to explicitly condemn how the sex/gender paradigm is used as a tool of domination in profoundly deleterious ways." But, I disagree. I think the film is all about condemning that paradigm, condemning the ways men manipulate the world, men manipulate other men, men manipulate women, and only to a lesser extent, the ways women manipulate men. This argument will be in two parts--today gender, tomorrow sex, or rather sexuality. 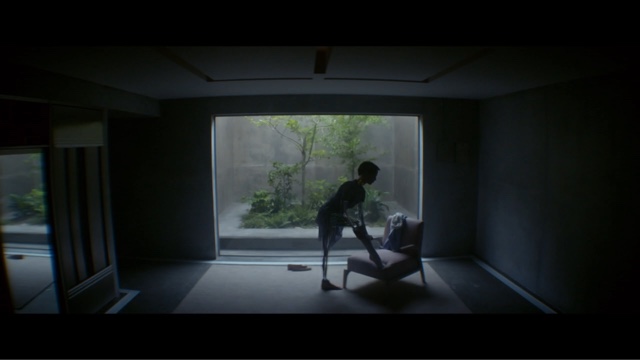 Let us begin with Ava. She is a literal construct, created by Nathan (LEVEL 1) in line with what he gets from the world as far as how women should be (LEVEL 3).

(Quick recap, in case you did not read yesterday's entry--these LEVELs are programming. LEVEL 1 is within the reality of the film. LEVEL 2 is what the film is doing to us watching it. LEVEL 3 is larger societal programming.)

He mentions early on that he hacked the cell phones of the world to figure out how to teach his robot brain about facial expressions but a) he either doesn't consider the possibility that his AIs took in far more than just facial expressions and the subservience he clearly wants would never really be possible long-term, or b) he never offered up anything extra like this as influence of the AIs' brains. That is, the programming of personality is entirely a projection of what Nathan thinks a woman is and should be.

Additionally, every impression that Caleb is allowed to have of Ava is also manufactured by Nathan, at least indirectly. The house is a controlled laboratory, recorded and manipulated... Eventually, Nathan even sees what happens when the power goes out. Nathan even intends for Caleb to want to help Ava escape. Not sure he wants the escape to happen--or for it to cost him his life, of course--but why else did he leave the glass panel cracked by Jade (Gana Bayarsaikhan) in place for Caleb to see it.

(Katherine Cross at Feministing describes the scene in which we see Jade:

Jade, an Asian woman, asking over and over again why she couldn't be let out, insistence building up with each passing day until she finally began beating on the glass that separated her from Nathan.

She literally destroyed herself against that irrational, nameless barrier; with a shot that lasted all of a few seconds, the filmmakers furnish us with a metaphor for centuries of sexism.

"Why won't you let me out?!" she screamed until her last.

When Caleb sees that crack, he does not know all of this, sure. But, what else do you think when you find a glass enclosure and that glass is cracked? Whatever is kept inside--and Caleb does know there is an AI somewhere in the house--had (or has) reason to want out.)

Even before Caleb sees Ava, he sees that cracked glass, he knows that something inside this enclosure has tried to escape before. He might even assume that it is Ava. That she wants to escape, or will turn to violence, is not supposed to be a surprise, exactly. For us (LEVEL 2) or for Caleb (LEVEL 1). Nor, watching it again, should it be any surprise that Nathan fully expects Ava's manipulation of Caleb. That is the test--Caleb is supposed to be manipulated into helping. But, to what end? As Cross points out,

Nathan had already been presented with AI of his own creation that longed for freedom, that fought to free themselves from him. He already knew, or should've known, that they were meaningfully sapient. What he seemed to be trying to build was a woman who would not fight back, and was continually frustrated by the insistent humanity of his AIs.

Nathan is actually too successful with his AIs if what he wants is subservience. Considering the deconstructed AIs we see in his closets, perhaps he was not seeking subservience, but was expecting it. Steve Rose at The Guardian points out that (in film), "Invariably, inventors' ideas of the 'perfect' woman translate to one who is unquestioningly subservient and/or sexually obliging. A Stepford wife, to cite the best-known example." It is not necessarily that Nathan wants a subservient female; the two things are, as far as the world has been telling him his whole life, one and the same. That same society favors a man like Nathan. While he is not strictly white, he's close enough. He is rich and smart and can basically do whatever he wants. And, on his estate, in his house, he is God. He seeks humanity and then regrets finding it because humanity doesn't want to just be his plaything while he puts off the inevitable IPO of his AIs. That he drinks, that he is abusive and manipulative--this is part and parcel of who he is as a successful man in the modern world. Unfortunately. And, I do not mean to suggest that every successful man is prone to violence or even mistreatment of women (or of lesser men), but a system that lifts some men so far above others (and above women) is inherently violent.

The interesting thing is that Caleb is part of that same world. However subservient he is to Nathan, in the larger world, he has a position above Ava (as a woman, first, then as an AI). Regarding Caleb, Cross says, "detesting Nathan is easy; the way the movie makes you hate Caleb is much more interesting, however." She explains:

He does, after all, come off as the good guy in the film at first; sympathizing with Ava, seeing that she is indeed human, growing increasingly contemptuous of Nathan's abusiveness, and so on. He seems like someone who wants to help her. But as the film progresses you start to see that Caleb's willingness to become Ava's confederate is contingent on the fact that she appears to have a crush on him, and wants to run away with him specifically.

Keep in mind, Caleb never seems like he will include Kyoko (Sonoya Mizuno) in his escape plan. Even though, as J.A. Micheline at Women Write About Comics argues, "Kyoko has suffered a great deal more than Ava has," at least as far as we have seen. It is all about Ava, all about the helpless woman he can set free. But, does he even want to set her free? Micheline argues that, to Ava, Caleb becomes another "bad guy" like Nathan once she learns of Kyoko's existence. Nathan has another AI as his prisoner and Caleb has not seen fit to mention this. So then, consider what Ava knows of men. She knows Nathan and Caleb and that is all. Nathan has kept her prisoner, Caleb has kept her in the dark about details of that prison. And now, he wants to escape with her. But, to what end? Shall she escape this prison for the larger societal one? She has a couple options if she escapes with Caleb; she can a) live with Caleb and never reveal what she is to anybody, which doesn't sound that appealing, or b) she can be revealed as the advanced AI she is and likely end up being picked apart by many more men (and women) who want to study her. Plus, imagine the official story when it gets out; everyone will think that Caleb saved her because a) she is a woman and b) she is a robot. As Micheline puts it,

In order to be completely free, she must overcome the obvious oppressor and remain vigilant against his more insidious brother--and she must be ruthless in doing so, lest she find herself trapped again.

Steve Hall at Screen Crush expands on that notion of Caleb as the "more insidious brother." He writes:

Because we see this movie from his perspective, we miss that his falling in love with Ava--his instant, desperate affection and desire to spring her from captivity--is almost as shallow and dangerous as Nathan's more overt misogyny. To Caleb, Ava is still an object; a symbol of sex that needs to be saved, not a sentient being who deserves to make her own choices. Nathan created women so he could own them and control them. Caleb is just seeking permission to do the exact same thing.

Society has consistently put men on top, women beneath them. Religions tend to reify this division. Formalize it so that, yeah, some men seek "permission" to control women. This LEVEL 3 programming, unsurprisingly, directs Nathan's LEVEL 1 programming of his AIs, of Ava. It also positions Caleb to want to save her. But, Ava does not need to be saved. She needs to save herself. The only way Ava can have any agency in the end is to remove Caleb from the equation.

Then again, the film was made by a man--and this blog entry was written by one--so how does the LEVEL 2 programming work in regards to what we are supposed to think about the film, or what you are supposed to think about all that I have put together here? I mean, I criticized the way Katniss Everdeen acts on ideas from the male characters around her. Why should the men have any say here? Why should you even listen to me?

Cross, K. (2015, May 28). Goddess from the machine: A look at Ex Machina's gender politics. Feministing. Retrieved from http://feministing.com/2015/05/28/goddess-from-the-machine-a-look-at-ex-machinas-gender-politics/

Micheline, J.A. (2015, May 21). Ex Machina: A (white) feminist parable for our time. Women Write About Comics. Retrieved from http://womenwriteaboutcomics.com/2015/05/21/ex-machina-a-white-feminist-parable-for-our-time/