he doesn't see his shadow

Speaking of a repetitive day-to-day, Phil Connors embodies that. I mean, in Pittsburgh, going to the station, repeating the same barely accurate weather information day in and day out, then a little banter with Nan and Kenny, then out on the town to pick up a woman to bring back to his apartment. He's already made his way through the secretarial pool, even has to avoid a few of those women. He's starting to feel as if he will never be able to settle down... at least in the moments that it occurs to him that he should.

And, in an earlier incarnation of the script, he has found Stephanie. He didn't mean to treat her badly. He even told her, explicitly, that he didn't have time for a "real relationship." One of these days, a major network is going to call him up and he doesn't want to have to worry about a girlfriend or, worse, a wife, to affect his decision to go. His immediate decision to go, that is. Leave Pittsburgh as far behind him as he did Cleveland.

Thing about Stephanie is, she doesn't seem to get it. Even when he namedropped CBS, she was latching on like she'd never let go. He just bought a new Lexus; he cannot afford an apartment in a real city big enough for the both of them.

But, let us not get carried away with invented moments. Stephanie DeCastro didn't survive into the final version of the story...

Ooh, she's probably extra angry about that. I mean, before she cursed Phil into repeating his day in Punxsutawney. Now, she probably did even worse, like cursing me to watch this movie 365 days in a row and (at least) once a month since. Recall Clover's (1992) bit about the women in horror films like Carrie or Friday the 13th Part VII: The New Blood--"supernatural and psychosexual intersect: cause a girl enough pain, repress enough of her rage, and--no matter how fundamentally decent she may be--she perforce becomes a witch" (p. 71). Phil certainly treated a lot of women like he did Stephanie, and all those women in the secretarial pool got just as erased from his reality as Stephanie did. (That is, they don't get mentioned in the final film, either.) Phil has left a lot of rejected women behind. Harold Ramis as well, cutting their mention from the script. It just doesn't make for a good positive energy as far as gender relations go.

And, I've got a thing that's been stuck in my head all day; see, Clover says of The Exorcist and Witchboard, "The question is how to explain this gendered division of narrative labor--to understand what it is about the male crisis that needs harnessing to a narrative of female hysteria or indeed psychosis" (p. 70). "What makes Groundhog Day significant among contemporary films," Daughton argues, "is that to achieve his transformation, Connors must embark on what is traditionally a feminine rather than a masculine quest" (p. 140). I was trying to figure out a way to map Groundhog Day onto Clover's idea here about the male crisis. I mean, it's easy to put Phil's situation into the mold of a male crisis. Just look at Davies (1995) for that. But, Rita has no apparent "hysteria" or "psychosis" and Stephanie was really just a producer-suggested, but-never-intended-for-actual-use construct to explain away the time loop. However angry she might be over not existing anymore, I don't think her amateur-hour witchcraft--seriously, she's got a book entitled 101 Curses, Spells and Enchantments You Can Do at Home--is going to cut through layers of reality. The other female characters are one-offs or occasionally repeated supporting players; they don't have the narrative heft or dramatic weight to qualify. But then, in my head, Daughton and Clover do a little dance together (and I forget about Davies) and Phil's feminine quest means he's not the male in crisis but the female going through hysteria or a psychosis. Rita is the male in crisis; we just don't see enough of her story to get it all. Sure, she's a new producer (in the final incarnation) dealing with an arrogant blowhard of a weatherman, but we get little else of her problems. She dreams of something bigger than Channel 9 Pittsburgh just like Phil does. I guess her crisis is that her dreams depend on people like Phil doing their jobs right, and she can't always control that. Phil is so psychotic that he thinks his day is repeating. And, she just wants to get the report done and hopes none of her prospective future employers sees this one. 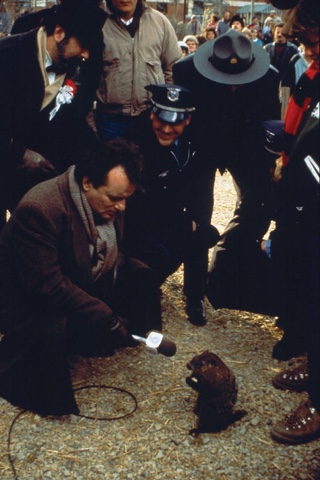