In retrospect, Somewhere in Time is an odd movie to be familiar with as a kid. And, I think I understood the film better than my review go-to Roger Ebert did at the time (and he was almost as old then as I am now). His review begins:

"Somewhere in Time" wants us to share its sweeping romantic idealism, about a love so great that it spanned the decades and violated the sanctity of time itself. But we keep getting distracted by nagging doubts, like, isn't it a little futile to travel 68 years backward into time for a one-night stand?

I bought the "sweeping romantic idealism" of it, and saw it as much more than a one-night-stand, even as a kid. And, watching it in the present, I still do. (Note: I watched this film during the first year of this blog (in addition to Groundhog Day that day, of course) because to the circular time travel loop within) and wrote about it. Particularly, I wrote about the bootstrap paradox of the pocket watch in the film, and I'll return to that tomorrow.) In Hollywood terms, if not in my own, love (however much I might often argue it doesn't even exist as a thing unto itself) is worth violating the sanctity of time itself. Hell, love violates the sanctity of everything already, separating individuals out from the herd, giving them reasons to exist beyond the mundane daily bullshit. I had no doubts about the worthiness of Richard's (Christopher Reeve) urge to will himself through time, or the worthiness of the result. And, even the tragedy of its ending is merely a fair measure of the end of any relationship. The time travel is just the analogy. The movie is about a love affair, one that has a beginning, and ending, and lingering feelings that can tear at the parties involved.

The movie surrounds its love story with such boring mumbo jumbo about time travel that we finally just don't care.

And, I reject that sentence entirely. 1) The film doesn't "surround" its love story with the time travel stuff (I'll deal with his terminology regarding that in a moment), rather it surrounds its time travel stuff with a love story, embeds one into the other, twists them into one captivating thing that can no longer be separated regardless of how boring you might find one piece. 2) How is the time travel stuff "mumbo jumbo"? On the one hand, that terminology is dismissive because Roger finds it silly, but he also calls it "boring" which is strange to me because the time travel parts of the film do not actually occupy much time. The prologue in the present takes its time, but then at best you could call that segment of the film "boring" but not the time travel mumbo jumbo. 3) Roger references the film Time after Time (great film, by the way) and how it "contained a love story that had a lot of sly fun with the option of relationships between people of different eras." But, that is not what Somewhere in Time is; it is not trying to be sly. It is capturing the feeling of love, the way it separates you from the world and quite fundamentally roots you in it at the same time. He complains that film doesn't have "slyness" or "fun" but the film makes not aim for such targets. When I rate a film on IMDb, for example, I try to measure it (primarily) based on what it is trying to be. You don't have to like a movie to recognize that it is good, you don't have to think a movie bad to dislike it, or vice versa. Finally, 4) clearly some of us care. And, I don't just mean me (or my mom or my sisters, or people who came over for dinner and a movie and chose this one); the film cost around $5 million to make and grossed close to twice that. It wasn't a box office bomb.

I don't know how to gauge interest in the film over time, unfortunately. Not without a serious load of research. Home video rental numbers year by year, that sort of thing. But, I don't think it was a particularly deep cut, as they say, when they used "Rhapsody on a Theme of Paganini" in Groundhog Day. The reference is deliberate, because when it comes to movies involving time travel and romance, sure the list isn't that long, but also Somewhere in Time is a grand example of one.

It's the kind of movie that positions love as a thing, a driving force like gravity. Richard is drawn to Elise (Jane Seymour), so much so that he goes back in time for her. Elise is drawn to Richard so much that she (now Susan French) waits 68 years to give him the watch that will trigger his interest. Roger calls Reeve's Richard "so desperately earnest in his love for this actress that he always seems to be squinting a little." He ends his review: "The whole movie is so solemn, so worshipful toward its theme, that it's finally just silly." As if solemnity is a bad thing. Inherently, I mean. Some very solemn films do feel quite silly. But, I imagine our willingness to find a film's solemnity silly waxes and wanes it direct proportion to our liking or disliking of said film's message. 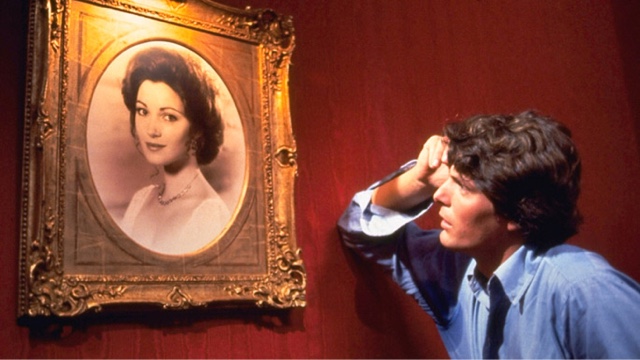 And, like Richard Collier, I tend to overthink the whole affair long before it begins, and lament it long after it ends. The latter, I suppose, is entirely common. The former, though--it has made for many hard and awkward moments in my life. But, however much I don't subscribe to love as a force unto itself, I think it's worth a whole lot of effort, if one can find it, or even imagine it.