the only way you can show your feelings

Women have been a plot device for male entitlement for as far back as stories were being told, as trophies for creepy behaviour, as the spoils of war, as the property of men, as the maiden-in-waiting for her adorable coercive, overly-persistent prince-charming. (Meagher 2015) 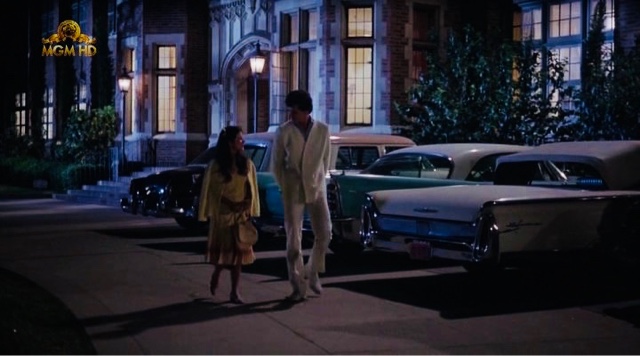 Tommy Dee gets a young girl to accompany him to his car, ostensibly to get a copy of his record before it is officially released, and he tries to get more than that. We don't know how old Tommy Dee is, but he seems to be somewhere close to the age of the actor playing him--Paul Land was 23-24 when The Idolmaker was filmed. However old the actress in the scene is, Vincent says her character is 14. When Tommy Dee demands more than just a thank you, she kisses his cheek. He calls that sisterly, and goes for more. Vincent comes to her rescue. But, does he reprimand Tommy Dee? Not particularly. He warns him away from jailbait in the future and that's about it. But her? Vincent takes on a nice tone of voice, like he's concerned for her--"Do your parents know that you're here?"--and he asks what she's doing there. He tells her to button her blouse, which Tommy Dee has unbuttoned, and implies that it's for her sake, because someone might see her. He gives her extra records for her friends so they will think she's special. "We won't have to mention this to anybody," he asks. For her it's about embarrassment, but that's not it at all. For Vincent, for Tommy Dee, it's bigger than that. And, while she doesn't realize it, it is bigger for her, too. Vincent tells Tommy Dee that if he wants to get laid, Vincent will set it up. Women--whatever their age--are just pawns to be used as needed.

The very next scene is Vincent meeting Brenda (Tovah Feldshuh) for the first time.

Vincent is not looking out for that girl. He's merely looking out for Tommy Dee. With his payola, with the deal he makes with Brenda for her to cover Tommy Dee in Teen Scene in exchange for half-ownership of Tommy Dee's merchandise, and even more with his control of Caesare, Vincent is very much a manipulator, a manager and producer who is all too realistic. Use anyone he can to get what he wants. Cover up the bad things that his artist does. And, when Brenda challenges him, he tells her to shut up. "God damn broads, don't know when to keep your mouth shut," he proclaims. He grabs her, forcefully, shakes her, tells her to shut up again. And he kisses her.

Does she fight back? Barely. Does she get away from him? Does she call off their deal(s) because Vincent is being horrible to her? No, this is Hollywood. She kisses him back. This is a film and that means that romance can come right on the heals of the man being an emotionally abusive asshole. Dodgson (2017) lists a few film characters who were, on the surface level (i.e. the way the film wanted them to be), the romantic lead but really were liars or emotional abusers--obvious ones like Jim Preston (Christ Pratt) in Passengers (Black (2016) (yes, that's me) described that film as "trying to have its misogynist cake and eat it with a deus ex machina Laurence Fishburne and the sudden ability to not only save a woman's life but also offer her up some interstellar hibernation") or Edward Cullen (Robert Pattinson) in the Twilight series, with some less obvious ones like Westley (Cary Elwes) in The Princess Bride or even Joe Fox (Tom Hanks) in You've Got Mail. Braca (2016) adds the oft cited Beast (Robby Benson) from Beauty and the Beast, adds Noah (Ryan Gosling) from The Notebook and J.D. (Christian Slater) from Heathers. He may have qualified for a meme, but Mark (Andrew Lincoln) in Love Actually makes the list from Truffaut-Wong (2017), as do Ronny Cammareri (Nicolas Cage) from Moonstruck and Lloyd Dobler (John Cusack) from Say Anything and Rocky Balbua (Sylvester Stallone) from the original Rocky. Regarding that last one, Truffaut-Wong says, "Rocky might be a classic sports movie, but it' salsa about how a man can turn a 'no' into a 'yes' just by being slightly charming and large." And, there are so many more. Look at the way Han Solo treats Leia, for example. In film, as long as the girl ends up falling for the guy in return, whatever his behaviour was it is justified after the fact. Dodgson cites psychotherapist Perpetua Neo: "In movies where the behaviours of male protagonist are not cool, we think it's okay because it's so sweet, it's love," Neo says, "Because it's wrapped up Ina. Cute ball of fuzz or a hot man - we think it's acceptable." Dodgson argues, "Those who watch these films are often young and impressionable, and so they may grow up thinking that things like waking up to a pale, brooding man in their room is not cause for alarm, but for wedding bells." Neo argues, "these idealisations of weird behaviour are setting up young people to accept it as normal." A study by Lippman (2015) seems (I've seen the abstract and one article that references it) to suggest that not every woman will fall for these things in real life just because she has seen it in the movies, but the influence is there.

In the real world, "Women have long been ostracized and threatened for speaking out about discrimination and abuse" (Magnani 2017). In the movies, the abused woman is more likely to fall for the man than report him. And, why not? I mean, movies come from Hollywood and Hollywood is run by men, men whose influence can make or break careers, men who can use and abuse and then be thanked from the stage at award shows because that's what you do if you want to keep starring in their films. These men write, direct, produce, distribute films that reflect this same patriarchal world--where a man can be an abusive ass and still get the woman into bed, where male characters get complicated backstories and motivations and female characters get lost in a Bechdelian void. The female character serves as goal, serves as the carrot to the protagonist ass at best. She is a prop more often than she is a fleshed-out person. Like Brenda here in The Idolmaker--she is the means to an end for Vincent, a necessary inclusion to show all the strings he has the wits to pull, and she just happens to be female so there can be a romantic element, because that might sell a few more seats.

That she is there for Vincent's final number suggests, in Hollywood terms, that he has reformed, that he is worth her presence. Except, what has changed for him? There is no reason to think he is a better man. He just lost all his other avenues so he's back to the one thing he had from the beginning--his own talent. It's a great song--"I Believe It Can Be Done"--but the lyrics position Vincent as the hero, as a guy just struggling to find love and success, and of course it's the world that is in the way, not his own arrogance, not his own entitlement, not reasonable people who want control of their own lives.

Magnani takes it back to the Bible (though she cites the wrong chapter and verse), citing Timothy... I'll offer a little context

I desire then that in every place the men should pray, lifting holy hands without anger or quarreling; likewise also that women should adorn themselves in respectable apparel, with modesty and self-control, not with braided hair and gold or pearls or costly attire, but with what is proper for women who profess godliness--with good works. Let a woman learn quietly with all submissiveness. I do not permit a woman to teach or to exercise authority over a man; rather she is to remain quiet. For Adam was formed first, then Eve; and Adam was not deceived, but the woman was deceived and became a transgressor.

(And the same is true with racial and cultural minorities, but that is a discussion for another day.)

--men, powerful men, want a world where their word is law, where women submit, where women are available for whatever demeaning sexual advance the man wants to make. And, they're lucky to be the recipient, lucky to be anywhere near the men in power. Like the imperialist, white-supremacist, capitalist, cisgender, patriarchy's scraps are the only thing a woman (or a person of color (or a woman of color, of course)) can hope for.

This is our world.

Now, we should tear it down.

Dodgson, L. (2017, November 12). A lot of problematic behaviour from male characters in films is supposed to be romantic--here's why it isn't. Business Insider. Retrieved from http://www.businessinsider.com/this-behaviour-in-romantic-films-is-problematic-2017-11

Lippman, J.R. ((2015, February 18). I Did It Because I Never Stopped Loving You: The Effects of Media Portrayals of Persistent Pursuit on Beliefs About Stalking. SAGE Journals.