whatever happened to working your way up?

Note: today’s entry was mostly written while sitting in the waiting room while my car was getting maintenance, so access to some resources was limited.)

The Jerk begins outside a movie theater--where a "comedy thriller" is playing--and includes director Carl Reiner as himself, with a direct reference to his filmmaking. (His going cross eyed because of Navin's Opti-Grab leads to Reiner to yell 'cut' too late while filming, which leads to a car crashing, actors die, and Reiner leads the class-action lawsuit against Navin.) These Hollywood references matter in a film that deals so much in issues of class.

Navin grows up poor (and black) in the south. Upon getting to the city, he gets a low class job as a gas station attendant. He works as a carnie. It is sheer luck that he succeeds at all in his life; while it is Navin's ingenuity that leads to him making the Opti-Grab, that is the only evidence of any cleverness on his part (plus, perhaps, his delay of "Mr. Nussbaum" but that situation goes south far faster than the Opti-Grab thing, destroying a church and letting criminals (Hispanic criminals driving a lowrider) get away) and the rest of the film is essential proof that his singular success is a fluke. Random chance nearly gets him killed when the Madman (M Emmet Walsh) picks his name out of the phone book and it is important to note--and while it is also just a funny coincidence, it feels like more than that if you assume a deeper meaning to the film--that it is that same Madman who, now working as a private detective, hunts down Navin on behalf of Stan Fox (Bill Macy) because of the success of Opti-Grab.

(Another notable echo within the film is that one of the first things Navin does, interacting with Marie (Bernadette Peters) is to hand her all of his stuff so he can chase after Billy, then in one of the most famous scenes from the film, when he leaves her later, he gradually picks up items to take with him. Their relationship is represented by their material goods, their sharing of them. When he is writing his checks after losing the class-action suit, Marie says, "I don't care about losing all the money. It's losing all the stuff.")

(There is also something to be said about the value of a verbal contract in this film, with that deal with Fox coming from a brief promise at the gas station, to Harry (Jackie Mason) hiring Navin as he's using the gas station restroom, to Navin promising Harry a postcard when he's rich and famous in exchange for rooming in the storage room at the station, to Patty's claim to Navin being her man.)

Navin's potential death and Navin's financial success both boil down to chance. In fact, it is in the same scene that Navin fixes Stan's glasses that the Madman tries to kill him. One situation ties directly into the other. 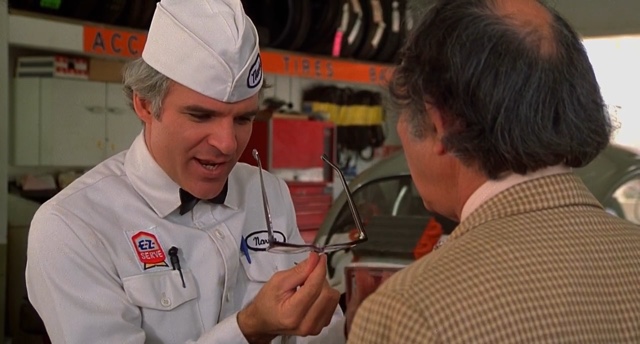 I'm reminded of Annie (still a couple "years" off in this deconstruction of my childhood experience with film) and the link between movie theater attendance and financial affluence. I think it was Lawrence Levine (I can't find the piece right now) who wrote about the change from poorer consumers visiting nickelodeons to richer consumers visiting the cinema. Of course, as time went on, well past the era seen in Annie, movie theaters, and the consumption of the product there, became more accessible. The Jerk comes at the end of the 70s--theater attendance peaked in the 1930s and 40s--when movie theaters were both ubiquitous and underattended. Through the 80s and 90s, big movie palaces would be replaced by multiplexes, making films more accessible even as home video and cable television, and then the Internet, made venturing out to the theater less and less necessary. An industry that caters to popular (white) culture made itself physically available but still insisted on putting out a product aimed at the dominant (again, white) culture. Note, of course, that Navin doesn't have a movie theater in his mansion; it's 1979, he has a disco room (and the Sheikh Al Fassi Mansion used for the production actually had that room) because that's the popular culture of the time. In the 80s he might've had an arcade (like in The Toy or in Silver Spoons). Today, he might have a private movie theater, and with Internet access he would have virtually any movie available at any time.

That initial juxtaposition of Navin and the other "bums" sitting in the alley beside the theater and the well-to-do folk lines up to attend the show matters as an establishing visual. Perhaps as much as the final visual copies an early one. Early in Navin's story, we see the shack where his family lives, and they're having a great time on the porch regardless of their lot in life. At the end of the film, he's back there with them, and Marie is there too. And, he says they needed a bigger house so they built one and it is literally the same shack built slightly larger, the windows enlarged, the door enlarged, but the same spots in the roof in need of repair. Navin's story has gone full circle, and maybe he's learned something, maybe he hasn't. But, the key detail is that nothing has really changed. The Opti-Grab customers have been paid back, Navin has lost everything he gained. The only difference, really, is that Marie is there, and maybe they're happy now, with just a slightly larger shack rather than a mansion with a red billiard room with a camel.

(And, as I was typing up the handwritten stuff I had produced while watching the movie on my phone, the ending changed. It happens. There was a whole paragraph about the restaurant scene, but some changes in phrasing earlier made the transition awkward.)