there is no try

Roger Ebert apparently never reviewed The Empire Strikes Back when it came out. He wrote a review for it in 1997, though, and he's got a great description of why this film is the reason the trilogy resonates. He writes:

After the space opera cheerfulness of the original film, this one plunges into darkness and even despair, and surrenders more completely to the underlying mystery of the story. It is because of the emotions stirred in "Empire" that the entire series takes on a mythic quality that resonates back to the first and ahead to the third. This is the heart.

It's an interesting idea, actually--that one film in a series might be the one that really makes the whole work. In the case of Star Wars, with only three films--the prequels and the new Disney-produced films are a separate case--and with repeated actors and filmmakers (and George Lucas behind all three), it is much easier to understand how this works. These three films connect more than, say, the Friday the 13th films... Which were the other franchise I thought of first when contemplating the way this might work in a less cohesive series. And, I thought of the trilogy of films in the center of the Friday the 13th series, The Final Chapter, A New Beginning, and Jason Lives, first. These three are tied together by the presence of the character of Tommy Jarvis (played by three different actors). The central film of these three is actually rather bad; it has its moments, but it is second only to Friday the 13th Part III for worst in the series. But, Tommy holds the films together and forms a relatively cohesive... Heart is not right, but neither is spine. Core--he forms a more cohesive core. And, without that core, the series would not feel that connected. Interestingly--and I've written about this before [actually, it was something I mentioned in my “Top Five Slasher Films” YouTube video]--Part 2, Part III and The Final Chapter connect rather directly by timeline and watched with that in mind make for a nice chunk of horror. But, they were released in May 1981, August 1982, and April 1984, respectively, so would have been experienced at the time as three somewhat separate films. 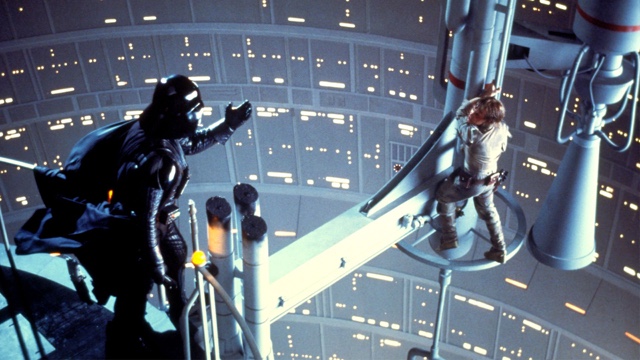 Star Wars was rereleased, was a cultural touchstone, and then Empire came along and grabbed everyone in the audience by the heart and you had to come back three years later to see what happened. Horror films have cliffhangers all the time, but a fantasy cliffhanger like this--that's a different beast. A horror film almost has to have a cliffhanger; that's part of the horror, that whatever evil might never actually be contained. Here, though, this is the heroes losing. Han is frozen and taken captive, Luke loses his duel, learns his father is the enemy (OOPS, SPOILERS), and loses his hand. This isn't even a Pyrrhic victory; it's just outright loss. You don't end a movie on this kind of dark note unless you're making a point about the futility of regular life--see the original ending of Clerks, for example.

Star Wars is not about futility. There is futility in it, in the darkness, in the despair. Even torture. But, the series is about something brighter.

Still this middle film does revel in the darkness. Quite literally in the Dagobah scenes, with the fog and the strange lighting. Something altered in the so-called "Special Edition" actually, with more windows, and more light, in the already relatively bright Cloud City.

Then I sat here watching The Empire Strikes Back and helping my daughter with some homework about Shakespeare (and also thinking about a backup character for D&D). You know, rather than writing. I swear I had something else to say about trilogies if not longer series of films.

Odd note: that last Stormtrooper to shoot "at" Luke when Leia is screaming that it's a trap, has a really awkward way about him. It's like the actor both wanted to walk to the side and realized he had to stay in place to get another shot off. It comes off like it's a kid in the armor who really has to pee.