i want to be everything to you

To counter the cynical side from yesterday, there is one scene that absolutely points to the reality of the whole thing, and the cosmic import of the love story at its center, and that is the opening. Regardless of what follows, that scene is real. And, Elise's arrival as an old woman is real. What makes the scene important when you take the side of it all being real, of it all bearing the import of time itself, of love itself, is that the crowd clears for this old woman. Now, maybe they recognize this old woman as the once famous Elise McKenna, but I doubt it; if they recognize her, so should Richard. (Actually, Richard's later conversation with Miss Roberts suggests that Elise may never have been as famous after 1912 as she was then; she was increasingly reclusive from then until her death.) Rather, I think they do not, but they part because there is something about this woman being in this place, something they can sense, something that has an energy itself, her mere presence silences conversation, draws people aside, shocks Richard. And, then she hands him that pocket watch and says those fateful four words, "Come back to me."

The connection between these two is bigger than what the crowd can see. It's bigger than Robinson can recognize in the past.

Because the film is not about a guy who imagines going back in time. No. Richard goes back in time, Richard finds Elise McKenna back in 1912, and they fall in love... Or really, she falls in love, because he has already fallen in love with her.

From the novel, Bid Time Return by Richard Matheson:

[Richard recounts his visit to the Hall of Histories in the basement of the Coronado Hotel (changed to the Grand Hotel for the film).] And in one of the cases is a program for a play performed in the hotel theater (wherever that was) on November 20, 1896; The Little Minister by J. M. Barrie, starring an actress named Elise McKenna. Next to the program is a photograph of her face; the most gloriously lovely face I've ever seen in my life.

I've fallen in love with her.

Typical of me. Thirty-six years old, a crush here and a crush there, a random scattering of affairs that mimicked love. But nothing real, nothing that endured.

Then, having reached a terminal condition, I proceed to lose my heart, at long last, to a woman who's been dead for at least twenty years.

A few important details: The play is the The Little Minister because that was a play that real-life actress Maude Adams was in. Elise was modeled after her. Matheson saw her photo while on a vacation with his family and "fell in love" and he imagined this story, a man falling in love with a woman in a photo then traveling back in time to meet her. (He recounts this story in the behind-the-scenes documentary on the DVD.)

(By the way, Richard's play titles shown in the film are Too Much Spring (the one at Millfield College at the beginning of the film), Of course, I Love You, Don't I?, and my favorite, Passionate Apathies.)

Meanwhile, Richard is drawn to Elise's portrait. He doesn't just happen upon it in the Hall of History. He is looking at items along one wall and then suddenly, he looks to her portrait on another. Drawn there. The film uses a practical lighting effect (with a post-production one added to augment the effect) to suggest something unreal about this moment. This moment, too, exists outside the hypnosis... Although, the cynic could take Richard's feeling drawn to the portrait to be a sign of his psychosis as much as it might be a sign of something more romantic and grand.

Back to the quote from the book, though. Regarding Richard, when he says he has reached a "terminal condition" this is more than just a metaphor. On the one hand, yes, his attraction to Elise has become something terminal, an end in itself if he cannot do something about it, but also, he is dying in the novel. Regarding his take as this being typical, I think I've offered enough about my own history in this blog that a constant reader might recognize that I can relate. Fall in love with a photo, fall in love with a character, fall in love with a woman I exchange just a few words with, or no words at all. Though I think I've had more than just mimicry of love.

Richard's next line of narration in the novel after the description above: "That face is haunting me."

This phrasing matters, just as the love at the center of this time travel story, or this time travel at the center of this love story matters. Elise's face haunts Richard. Imagine as well that Richard's face haunted Elise for those sixty intervening years. Imagine the power of a love that kept her from other men in those years, that pulled her from the stage, that drew her to Finney's book Travels Through Time in 1971, a year before she finds Richard. And Finney just happens to be Richard's philosophy teacher at Millfield College. She has his book. She and Richard are being pulled toward one another.

She also has a model of the Grand Hotel that she had made, and it is a music box that plays Rachmaninoff. The piece Richard mentioned and she had never heard. She knows that Richard came back in time to her, even though he never told her as much.

In the past, Elise has been told by Robinson that one day she will meet a man who will change her life. It's actually a strange thing for Robinson to tell her, since he aims for so much control over her. But, maybe he ties up every man she meets, and she is convinced by their sudden absence that the particular man cannot be this man Robinson has predicted. But, imagine, if you will, that every time she meets a man, she asks him what she asks Richard upon first meeting him: "Is it you? Is it?" Even without the import the film is putting upon them, Elise's own romantic impulse forces each relationship to be something bigger than can be maintained.

Meanwhile, the introduction of Elise in the past. The direction is deliberate. (Director Jeannot Szwarc mentions this in the behind-the-scenes documentary and also in the commentary track (which I've got playing tonight.) She is introduced reflected in a window. We get to see her before Richard does, but only barely.

Szwarc doesn't explain why, though he does say it was the plan from the beginning. My take on it is that this is the film acknowledging itself as a film. The visual image matters. The frame of the window matters.

Consider also the moment that Robinson is getting his picture taken. We see through the camera, see him framed upside down. In the commentary track, Szwarc calls this "just a transition" but I think it is more than that. Even if not on purpose. We see the villain of the piece (I mean, aside from time itself) positioned upside down.

Consider also the driving force of Richard's attraction to Elise in the first place. It is her photograph, and it is specifically a photo of her looking at him (in the past). 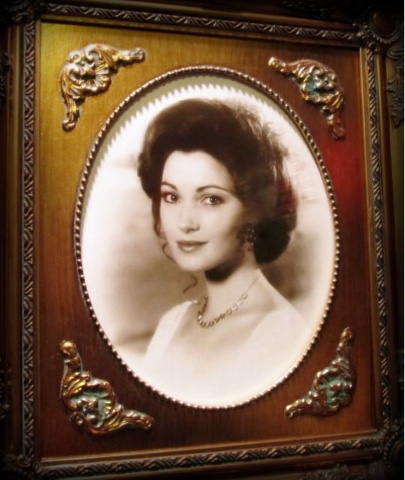 This is the film being a film. And for good reason. The cynic could take it as a love like this only existing in fiction. The romantic, though--for the romantic, Somewhere in Time is acknowledgement of something that, yes, maybe it can only be imagined, maybe it cannot be quite fathomed, understood, measured, forced into a box of one couple's story in the real world because we like to imagine that love is bigger than the way it arrives in reality. Somewhere in Time is here for them--

(and it's no wonder that fans of the film organized and formed INSITE--The International Network of Somewhere In Time Enthusiasts--in 1990, and have had annual events at the Grand Hotel. Not unlike fans of Groundhog Day making pilgrimage (as I did for Groundhog Day, 2014). Because the film transcends film. It offers up something that grabs at something deep inside the viewer. Well, some viewers. And it does so for them...)

--to find comfort in the notion that love can not only alter lives but alter the world, alter the flow of time. Szwarc compares the character of Elise (especially, as they were casting her) to an iceberg, most of her beneath the surface. She has to be this way so there is something beyond Richard's obsession with her portrait through the first act. The film's take on love and romance is much the same. As a film, it can only show us so much. What is the Queen's line about love in Shakespeare in Love?

Meanwhile, an interesting moment: Richard has just witnessed the taking of the portrait that fueled his obsession and his trip into the past. He sits in his seat again. The play continues, but he seems to be lost in thought rather than paying attention. Elise is not on stage.

Man: I am the one who loves her!

Woman: Neither do you.

Man: I can provide her with life's enrichments, rather than the riches of life.

Meanwhile, an usher has brought Richard a note from Robinson.

Man #2: Are you sure what you're saying?

Man: I think an old song says it best.

And maybe he's about to sing. But, we don't get to know. CUT TO: Richard outside, walking to meet Robinson.

But, the movie is like an old song. An old song that has withstood the test of time. On the one hand, the film is good, well put together, and timeless. On the other, the themes of the film are, if such a thing can be measured in levels, even more timeless.

And, it still holds up.