My first thought upon turning on The Idolmaker is that even more than we watched the movie when I was a kid, we listened to the soundtrack. On vinyl. And, that gets me thinking about other soundtracks we listened to a lot. Somewhere in Time's soundtrack was one of them, and I don't think I mentioned John Barry's score at all last week while watching that one. There was the soundtrack to Grease 2, which will come up in this deconstruction sometime in the next month or two, probably. (The pace of this thing is not out of hand, exactly, but it is increasingly slow.) And plenty I'm forgetting. I remember a 45 single of "All Time High"--that's the theme to the James Bond movie Octopussy, which is also going to show up in this deconstruction at some point. And, outside of movie soundtracks, there were musicians from the 50s, stuff my parents liked.

And, seriously, Tommy Dee (Paul Land) starts singing "Here Is My Love" and I still know the lyrics. That shouldn't be surprising because that's how music works, but it is.

Tommy Dee, by the way, is loosely based on Frankie Avalon. Bob Marcucci--the basis for the titular Vincent Vacarri (Ray Sharkey) here--started working with Frankie Avalon when he (Frankie) was only when he was a teenager. Avalon was born in 1951. Land, who plays his fictional incarnation, was 24 when The Idolmaker came out. Peter Gallagher, who plays Caesare--the fictional incarnation of Fabian, who was 14 when Marcucci discovered him and 16 when he signed him--was 25 (playing a 16-year-old). The story of young artists getting discovered, then making it big and getting too full of themselves--that's old hat at this point (judging by Roger Ebert's review of the film, it was old hat when this film came out) but I wonder if an age-accurate version of this story wouldn't work as better commentary on the industry and what it does to artists. At least the film acknowledges that Tommy Dee might be as old as the actor. Tommy Dee doesn't want to perform for "a bunch of 13-year-olds" because he's used to playing for adults. Ray Sharkey, whose character refers to Tommy Dee as a "kid", is only four years older than Land, three years older than Gallagher. 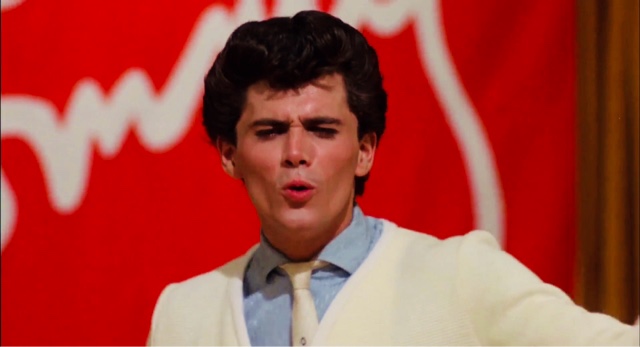 This movie is, of course, about a couple young men becoming famous, and about their manager who would be a star but he started going bald as a teen and just doesn't have the charisma to be popular (supposedly). And, as he tells Caesare, "It's the looks that count."

While I saw this movie many times when I was young, I think I've seen it maybe once in the past 20 years. So, picture me getting lost in the movie and forgetting to focus on writing. These movies are like comfort food. I know I've used that metaphor before. Groundhog Day especially is that. But, this deconstruction is nice. I mean, I try to find deeper things than I would have (consciously) noticed as a kid, but at first, it's just nice to watch some of these movies I haven't seen in a long time.

And, it's interesting. Two nights ago, I went to a concert where a lot of the fans were young, including my daughter and one of her friends. And, young fans still go crazy at live show. No one stormed the stage like they do Caesare's, but as each song started, as there was that moment of recognition, you could feel the excitement.

And, Vincent is a manipulative bastard. And kind of an asshole. I think I know where this has to take me tomorrow.