i do this every day

You probably haven't seen The Villain. It was apparently a box office bomb in 1979 (though I cannot find specific figures--box office mojo starts having clear figures in 1982--Alt Film Guide cites its failure in a piece about Schwarzenegger's The Last Stand failing at the box office back in 2013. For whatever reason, we had it on one of our VHS tapes. It's a western by way of (and very much so) a Road Runner cartoon. Cactus Jack Slade (Kirk Douglas) is the black hat out to rob and ravish Charming Jones (Ann Margret) who is being escorted by Handsome Stranger (Schwarzenegger). It starts like a typical western film. Shots of Monument Valley, a lone cowboy (Cactus Jack) on horseback, an almost cliched score. Then, Slade tries to jump onto the top of a passing train and misses, and it becomes immediately clear that this is not really a western as such. Also, Cactus Jack's horse Whiskey might actually be smarter than he is.

Cactus Jack is Wile E. Coyote in the equation of the film, Handsome and Charming together are the Road Runner. Without Acme-style contraptions (but with a painted tunnel in a cliffside, some glue, and a seemingly endless supply of rope), Cactus Jack tries repeatedly to steal from Charming and fails.

Names make the whole thing obvious, of course. Charming's father is named Parody. (Though, this isn't really a parody so much as a cartoon writ into live action.) Jones is also, presumably, a reference to cartoonist Chuck Jones. And, Charming is being escorted, along with a bunch of money, that is wanted (back) by banker Avery Simpson. Reference to another cartoonist, Tex Avery. Handsome Stranger was named after his father, who he never met. And each of the three characters at the center of the film have songs on the soundtrack that explain them a bit too obviously. It's all quite deliberately silly.

So, I've decided to take it seriously.

Cactus Jack is tangible (1). He's central to the story (2). He's an outsider (3). He isn't divinely sourced, but he is sent by someone who literally can decide if he lives or dies (4). No miraculous birth. Briefly, Cactus Jack does have an alter ego, posing as a traveling minister (5). There is a special/normal thing going on with Cactus Jack; he appears the usual outlaw but messes up everything he does by committing outlandish feats (6). No twelve associates... except he does try to enlist the aid of the natives that Jones has arranged to watch him (7). No holy age and no Judas Figure; Simpson is betraying the Joneses, but that makes him their Judas, not Cactus Jack's. Charming is quite explicitly "sexually tagged", what with her deliberate attempts to bed Handsome, making her the Mary Magdalene Figure (8). Oddly, Handsome is almost a Virgin Mary Figure; he is clearly virginal, but he doesn't play the motherly role to Cactus Jack. Nervous Elk as John the Baptist Figure? I'll allow it (9). Plenty cartoon-style Death and Resurrection (10). And Cactus Jack's cartoonish bouncing around at the end of the film is definitely a mark of Triumphalism (11). No service to lessers, no willing sacrifice; all of Cactus Jack's sacrifices come from stupid mistakes and accidents. All that injury, though, does qualify in this context as torture, though (12). No stigmata, definitely no stigmata, and no innocence. Not in Cactus Jack anyway. Cruciform Pose (13): 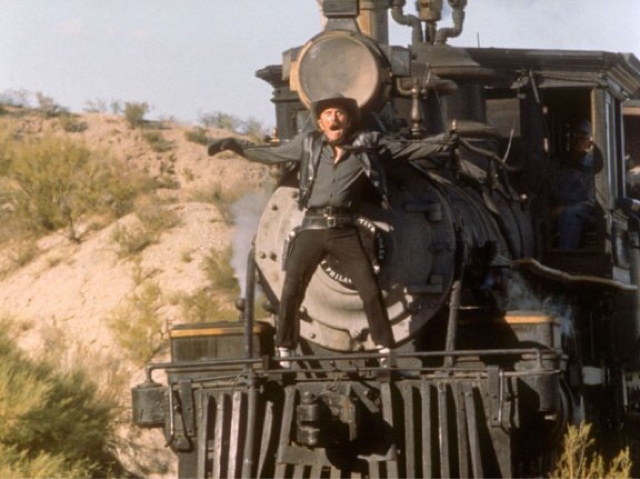 But no cross associations. Lots of Miracles and Signs, except hardly anyone sees those signs but the audience (14). Simplicity, yes; Poverty, yes (16). No Jesus Garb. He's got Blue Eyes (17). No Holy Exclamations as such. But J.C. Initials? Oh yeah, just in reverse. Cactus Jack. C.J. (18). Not the greatest of scores on the Black-Kozlovic Christ Figure Scale, 18 out of 25. But, that's 72% Christ Figure. That's pretty good.

But, the other option would have been too research-intensive; see, I had this thought that all these westerns that filmed in and around Monument Valley all take place in the same universe, at the same time, and all these heroes and villains are just barely missing one another and perhaps missing out on helping each other's plots along. But, I really don't want to list all of the westerns that were filmed there. Or take the time juxtaposing characters from the various films within each other's stories.

Like the universe from Last Action Hero but for westerns.