as the twenty-first century began...

Headline today: Highly educated women are freezing their eggs due to shortage of equally educated men.

They should probably start breeding with the stupid men because a) gotta avoid the eugenics implications of the opening sequence of Idiocracy, and b) all men are pretty stupid, in one way or another. 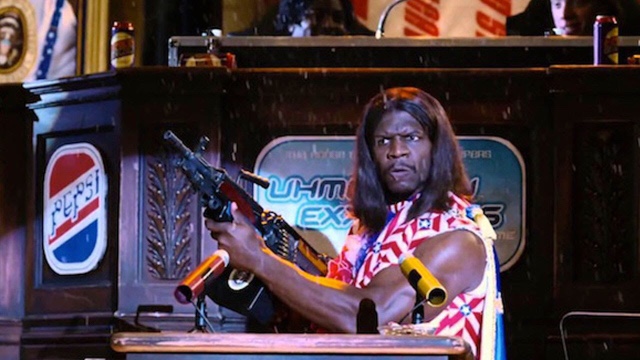 I was thinking about starting with a rant about sexism regarding that opening sequence, actually. It's labeled as "Trevor & Carol" vs "Clevon" because, I guess Trish doesn't get to have her name on screen, because Clevon is also breeding with Britney and Brandy... Except I'm not even sure in which direction that is sexist. Sexist toward the women on Clevon's side for not including them? Or sexist toward Carol for the suggestion that maybe it's her fault that she and Trevor can't have kids? Or sexist toward Clevon for putting all the blame on one side of this lopsided equation on him and him alone, while Trevor gets some of his blame mitigated by Carol? Or, is it just me being silly because I decided I was watching Idiocracy for three days instead of just two and I didn't want to jump right into serious stuff like referencing Fiske (2002) regarding intergroup conflict. Actually, I considered just jumping into a potentially long, personal rant about what I want from the government, from society, from life--and I might still get to that--but I didn't want to be too self-indulgent.

I'll get to Fiske in a moment, but first, one more thing from Reihan Salam's Idiocracy review: "Idiocracy challenges a central article of faith in American life, the notion that we are destined for moral, material, and intellectual progress." I like that. Or rather, I don't like that, the idea of it. But, I also don't buy into destiny, and I don't much care for most of the supposed central tenets of American life, because we throw ideas out there then back away from them as soon as it helps someone we don't like. We want equality, except wasn't life better when black people weren't so uppity? We want equality, except wasn't life better when gay people stayed in the closet, didn't demand the right to marry, and, hell, could be stoned just for being gay? We want a society built on a stable foundation, but damned if that foundation isn't a bunch of people too poor to get by without some sort of government assistance and too stupid to know any better than to vote against their own interests. We built our country around immigrants and the implication (if not the practice) of openness regarding religious beliefs and cultural practices, but damn those foreigners, even the ones whose very lives depend on getting the fuck out of war zones we're at least partially responsible for perpetuating. Yesterday was the Fourth of July and it bugs me when so much of that celebration gets twisted into yet another day to celebrate the military. (We've got Veterans Day and Memorial Day for that already.) The Fourth of July should celebrate writers, celebrate the voice of the downtrodden against their oppressors. (However much the colonists were downtrodden, relative to so many other downtrodden peoples throughout human history, and however much the British were oppressors, relative to so many other oppressors throughout human history, of course.) But, this is America and we love a show of arms, a display of force. It''s fundamental to so many of our ideals. Protestant Work Ethic, sure. But, also simply, if you are not putting enough effort in, it's your own damn fault that you're not getting the results you want. Nevermind systematic and systemic oppression. We're stuck on this idea that if it isn't working it is never because probably not that you're doing something wrong, but because you're just not doing whatever you're doing hard enough. Or you're not throwing enough money at it. Or stealing enough money away from it. Or... I don't know. I'm tired of ranting, tired of constantly feeling an us and them vibe on far too many sides when discussing politics or social issues or anything really.

It's the Fiske thing. "People typically seek other people who are similar to themselves," she writes, "being comfortable with others they perceive as members of their own in-group." It's not even really a bad thing. I'm a nerd. I like games. I like movies. I want to spend time with people who also like games, who also like movies. And that's fine if that's all it is. Or rather, if that isn't all it is. The Internet allows for a whole lot of echo chambers these days. People backed into their political corners, finding angry voices from opposition trolls and cheers from their own. And, it's self-perpetuating. Fiske writes, "From comfort follows, at best, neglect of people from out-groups and, at worst, murderous hostility toward out-groups perceived as threatening the in-group. Citing herself (1998), Fiske writes, "Stereotyping, prejudice, and discrimination reflect, respectively, people's cognitive, affective, and behavioral reactions to people from other groups." Basically, I don't like you, you're not from my group, so I'm going to lump you in with the rest of the out-group and call you names (Fiske later writes: "People often attribute the out-group's perceived failings to their essence...), turn you into straw-men I can dismiss more and more easily each time any of you deign to speak up around me. Fuck togetherness. Fuck unity, for whatever purpose. Fuck peace. Fuck you.

I feel like I need a break from politics.

From the real world.

Except I like some parts of the real world. I have some great classes this summer with my Upward Bound kids. My own kids are becoming actual people who I like most of the time. I have some good friends of late. I've gotten better about thinking about the future, planning for it... Though, I've still got to work on acting on some of those plans.

Like writing about what I want from the world. I won't be getting to that today.

Timmins, B. (2017, July 5). Highly educated women are freezing their eggs due to shortage of equally educated men. Independent. Retrieved from http://www.independent.co.uk/life-style/highly-educated-women-freezing-eggs-shortage-equal-men-successful-career-children-a7824611.html