you can never do anything by half

Author's Note: Color me a hypocrite, but I don't follow much, if any, of the advice I am about to give. 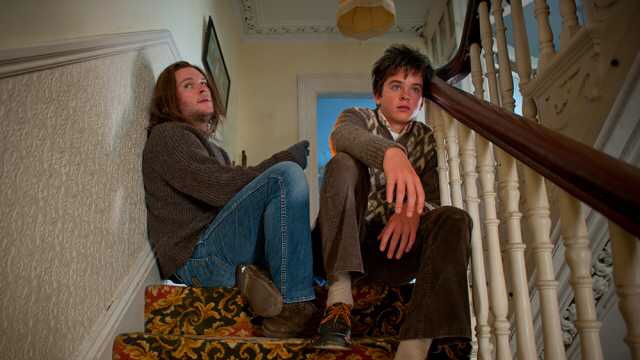 Here's the present: I'm sitting on a pew in a church building someplace in Long Beach, California. My daughter's got rehearsal for a play and we're far enough from home that I just hang out during, work on my blog, watch some tv, read, whatever. Only my third time tonight, so I couldn't say there's a pattern but for writing this blog. I've already seen two movies today--Wish Upon and War for the Planet of the Apes--but I don't feel like writing about either of those. I'm stuck in a different mode. Stuck in a loop.

I was listening to the soundtrack to the Groundhog Day musical on the drive here. Between Phil's being stuck in a pattern he needs to get out of, but not for the reason he thinks; Rita being stuck on imaginary knights in shining armor from childhood fairy tales, but knowing that's unrealistic and not worth waiting for; and Nancy, playing the part that society has put upon her since puberty because she doesn't know how to do any better; I find it far too easy to connect with the show. Like the film for so many days of this blog.

But also Conor here in Sing Street yet again. (Got it playing on my phone, writing on the iPad right behind it.) Except Conor is actually not like me at all. Sure he's a hopeless romantic but he also acts on his urges and his whims, goes after the things he wants. I think I'm more like his brother Brendan. Once upon a time, I had dreams, but they died a long time ago. Died more than once actually. And sometimes they show up in my head again, even though I have found something to do with my life now that I enjoy, that is fulfilling. I guess I feel like something is missing. And then I feel bad for missing it. I said a few days ago, when I was being extra self-indulgent, that I had my shot. My life is mostly today what it will be for the rest of my life. I could use more teaching gigs, but that isn't a change of life, so much, as just an increase in one portion of it. I've got some friends who have nerdy interests like I do.

I get to step outside my self every Sunday playing Dungeons & Dragons--on the Sundays that I'm a player, I'm currently playing a Tabaxi Rogue Warlock... Let me translate for you readers who don't know the game; I play a cat person who sneaks around and kills things because she has a demon inside her. Yes, her. I play a female, and she's a bit of a flirt, unlike me. Every other Sunday, I run the game and I can play lots of different characters but for shorter bits of time. Last week, for example, I was a half-Orc blacksmith who was too busy selling my player's characters magic items to really have too much character, then I was a prostitute having a "chat" with one of the player characters. Though I put chat in quotes, really all it was was talking. My character had useful information for the players. But, the opportunity to be a little more forward, a little... smoother. That was nice. (Though, possible the most fun moment for me was at the end of the session when I was a bear who had just been commanded by magic to kill its own master; made for a sad moment when a character cast Speak with Animals and they talked.)

That tangent was longer than I expected.

My point is that at a certain point your life will stall. That isn't even necessarily a bad thing. Just, if you don't jump in feet first every chance you get, your life will stop changing, stop growing. Doesn't mean you won't enjoy it. Doesn't mean you won't feel accomplished. But, I figure we all know that the times we do do new things, that we do jump into new things feet first, life is so much greater.

Groundhog Day this evening had me thinking, and I was reminded specifically of Nietzsche and "eternal recurrence" and of the movie About Time and that bit where Tim repeats each day to get the hang of appreciating everything that happens, then stops repeating them but still lives them the same way. Appreciate the moments as they happen. No day but today, and all that.

But some days are better than others for that. Some days are boring. Some days involve cleaning--I'm looking at you, tomorrow. Today movies and writing. Tomorrow cleaning and laundry and making dinner. Tabaxi Rogue the day after.

Or really--and here's the advice part--every day is good for it. Every day has something worth appreciating. If it doesn't, then you need to find something to appreciate. Hobbies, friends, a new job. Whatever it is. As Raphina tells Conor, you can never do anything by half. He takes the opportunity to kiss her. And, as far as the film goes, it's an adorable moment. In reality, though, that's like assault these days. But the advice is sound. If there's something you want (and you don't have to take advantage of or hurt someone else to get it) jump the fuck in and grab it. Quit the job that sucks and go after a new one. Ask that person out on a date. Try that hobby or whatever that you have been thinking about but were too afraid or nervous. Hesitation will get you nowhere fast.

If you don't like who you are, be someone else. If you don't like your life, live another one. And, when life is good, when you are good, embrace it, enjoy it, remember it forever and always.

Be like Conor, not Brendan. Have your dreams, dream them, chase them, catch them.

In movies, this is easier. The story is finite. The timeframe is limited. So, things actually happen quickly. Unless you're in some mopey indie film, I guess. So, maybe my advice is really, imagine your life as a film. Do you live in an action film? A romance? Or is your life some indie film that's going to screen on like half a dozen screens at best in Los Angeles and New York?

Which is actually an interesting comparison since Sing Street is a smaller film. Only made $3 million here. Made less in the UK.

So imagine something more obvious--When Harry Met Sally... perhaps, except they've got their problems... Every movie romance inevitably has problems along the way because otherwise it would be too short, too simple. And, you should want a Hollywood ending.