when you don't know someone

An interesting thing about Sing Street--and I realize I haven't really said much about the movie itself, yet--is how many little moments are quite depressing if you really think about them, like Conor's mother Penny sitting out in the sun because her husband Robert won't take her on holiday to Spain, or Raphina talking implicitly about her father sexually abusing her as casually as the film shows us Barry's father physically abusing him. And, Barry's father's abuse making Barry the bully he is, as well. Or Brendan, who has to confront his dreams--"Once, I was a fucking jet engine!"--when he sees his brother becoming a musician. Most of these things are off screen, passing bits of dialogue hinting at them. One big onscreen one is when Father Brother Baxter forcefully washes Conor's makeup off.

But then, there's beautiful positive moments, too. Like every time Conor shows up at Eamon's door to write a song and Eamon is delighted to drop whatever he''s doing to help, even when he's doing "rabbit stuff." Or the bit I intend to use for a blog title another day in the future, when Raphina tells Conor "You can't do anything by half" and he kisses her and though she doesn't really like him like he likes her just yet, she realizes his response to what she said was spot on. The cowboy kid's "Piss off Ryan" when he and the other kid are checking out the band recruitment poster, is a great moment, too. The cowboy kid also has a nice moment on the train, dancing with the old lady.

The point is, the movie does a good job with supporting characters and their tangential adventures. You can see how, say, Conor's parents' marriage is coming apart even if some of their fights weren't so obvious... Honestly, there is a very "Irish" vibe going on, like a bunch of cinematic cliches (though, based on my reading of Frank McCourt's memoirs, they might not be inaccurate) about poor Irish folk holding up a cute romantic comedy plot (that also happens to be a sort of ode to music videos and eighties music). 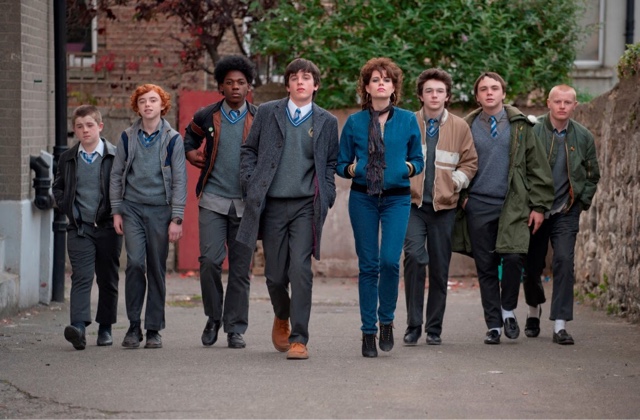 And, I feel like I want to say more. I want to explore the story, the characters, the plot. But, it's all just an excuse to avoid other things. I'm watching this because otherwise I've got a list of dystopian films to watch, political rants to go on. But, really, I just want to watch Sing Street and imagine that I could be as forward and as bold as Conor is, but I don't ask women out. As I said yesterday, I feel like I had my shot to a life. I had a girlfriend, I had a wife, I've got kids. I've got a job. I skipped some parts but, hey, I'm an adult now. And, the person I would want to... date? or whatever--she can do better than me. She should do better than me. Hell, If I actually ask her out sometime, I hope, for her sake, that she says no.

But, this is about a movie. A romance. A comedy. A pseudo-musical. A delightful little film.

I'll try to stop talking about myself.