it would take me a year

One of Phil's lessons--one of many that he has to learn in his time loop--is that women matter. Other people in general, but also specifically women. In his trapped life in Pittsburgh, he was a womanizer. The film doesn't make this obvious, but the ease with which he shifts into trickery mode to seduce Nancy after being in the time loop for only three days should give you a hint. Phil sees women--as he sees most people*--as sort of props in the play of his life. There to be used and forgotten.

(* He calls them by nicknames more readily than he calls most of them by their given names. He calls Mrs. Lancaster "Mama" and not in a nice way like he calls O'Reilly "Pops" or "Dad." He calls the man in the hallway "Pork Chop." He calls Nancy "Rita.")

For example, forget about Nancy or Rita for now. What about Mrs. Lancaster? 1. Mrs. 2. He barely knows her, she barely knows him, and he doesn't know what affect his kissing her might have. In 1993, you know, it's amusing to see Bill Murray plant one on Angela Paton, 20 years his senior, to see her flustered. But, you could imagine that same thing being labeled as assault these days.

Doesn't matter if you think that labeling is ridiculous, you just have to realize that it could happen. 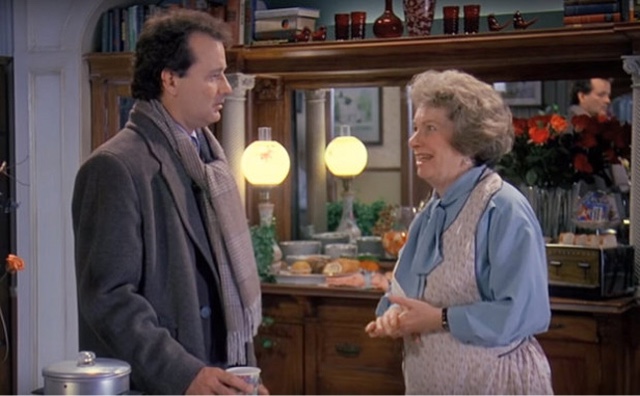 In that moment, Phil is using Mrs. Lancaster for his amusement, for a brief bit of excitement, nevermind what she might want. Like he would so many other women in Punxsutawney.

And, then the topic changed because--and this is one of the amazing things about this film--tonight I have seen something new. Or rather, the copy of the film I'm watching tonight--Starz via Amazon Prime on my Fire Box, is clear enough that I could read something I could never read before. There's a t-shirt hanging in Tip Top Café--on the wall above the table behind where Nancy sits reading her paper. I could tell that there was a basketball on it before, but could never make out the words. On the one hand, the shirt itself is not that exciting, just another prop to give the Cafe some character. But, what it says points to something I could never definitively identify--when the movie takes place. See, as I said, Day 249 - it's still just once a year:

My presumption about films in general is that if a film does not specifically say in what they it is set (and it is not obviously set in some year in the distant past or future) then it is set in the present year in which it is released. Groundhog Day, filmed nearly a year earlier, was released in February 1993.

Groundhog Day, of course, is February 2nd. I went on to touch on Phil Connor's eastern astrological sign and how the year would change it. Then, I mentioned the one link the film actually has in setting its year. At the party at the end of the film, there's a banner calling it the "105th Annual Inner Circle Groundhog Day Festival Banquet." But, I explained, "1991 [was] the 105th" Groundhog Day celebration in Punxsutawney. In reality, at least. "If the film is set in, you know, reality," I wrote, "then it is set in 1991." And, I continued with the astrology.

But now, there's the shirt. Sideways next to the basketball image, in big bold letters, it says "PUNXSY," short for Punxsutawney. Then, under the image: "1991-92 Runners Up." (There also seems to be smaller writing around the border of the image, but I can't make any of that out.) Now, we can assume this is high school basketball. The Chucks. Punxsutawney Area High School. The shirt might even be real and not just a prop, as the 1991-1992 Chucks went to the PA Western Conference Championship. But, that seems to have happened in March 1992. (The film was mostly filmed in April.) This means, the film takes place, at the earliest, in 1993. The original assumption. Except, that means that festival banner doesn't match reality, and that could be a simple prop mistake, or it could have serious implications about the film's place in our world. (Or I just love to take little details and blow them up into something bigger.)

(Like Phil assaulting poor Florence Lancaster that morning then going about his business with no concern for how traumatizing it might have been for her. I imagined her sitting in that tv room off the front hallway, alone, the tv off, crying, wondering how she might tell Mr. Lancaster what happened. Or maybe Mr. Lancaster is dead and she's a widow and she's reminded of him and she hasn't thought about him in any great detail in a while, and it makes her sad on another level.)

In Chinese thought, Wood attributes are considered to be strength and flexibility, as with bamboo. It is also associated with qualities of warmth, generosity, co-operation and idealism. The Wood person will be expansive, outgoing and socially conscious.

Aside from that "outgoing" thing, that sounds like me.

(Gotta interrupt because--and I'm not sure I could ever read this bit before, with my DVD, blu-Ray, or on the Netflix copy, or my HD iTunes copy--one of the banners over the entrance to Gobbler's Knob says "...since 1887!" Which means, this film has to be set in February 1991... Which means that t-shirt is actually foretelling the future. Perhaps another of Punxsutawney Phil's prognostications?)

Anyway, if Phil is the same age Murray was, then Phil was born in 1951. Which makes him a Metal Rabbit. Classical Historical Mythology Review describes Metal like this:

Metal is yin in character, it's motion is inwards and its energy is contracting... In Chinest Taoist thought, Metal attributes are considered to be firmness, rigidity, persistence, strength and determination. The metal person is controlling, ambitious, forceful, and set in their ways as metal is very strong.

Also, I should just make it clear. I think someone in the art department just screwed up their math, subtracted 1887 from 1992, and got the numbering off by one because 1887 wouldn’t be the 0th Groundhog Day but the first. Except... 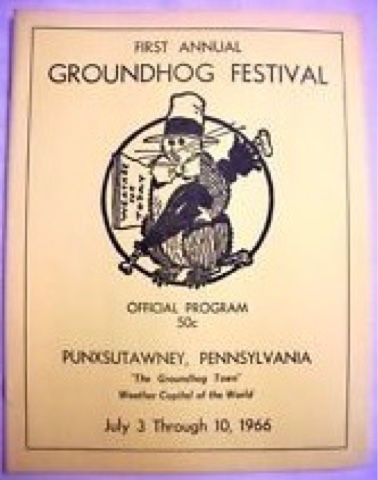 If this image I just found online is accurate (albeit blurry), then was there no official Groundhog Day Festival in Punxsutawney until 1966? Actually, I just double checked and learned something new about Groundhog Day--the holiday, not the movie. The festival was not public until 1966. They would announce the prognostication but everything about the ritual or whatever was secret. So, while a UPI piece from 1991 says that people have been trekking to Gobbler’s Knob for 104 years, it would not have been the 106th Annual Groundhog Festival. Rather, it would be the 36th. And, 1993 would have been the 38th.