Less important than making my survey is the reasoning behind it. I've said before that I could write a memoir using movies to tell time, a la Fever Pitch. And, the "thesis" if you will for this whole blog (per Day 579) is:

That is to say, if I can know your favorite movies, know what it is you look for in a movie, then I can know you. I tweeted (and then retweeted with my personal account over to Facebook) a few posts about what people's favorite movies are--their top five. But, it's more than that. For example, there's a huge difference between how I choose my favorite movies and how I might decide what are the best movies. Hell, I don't really even bother with the latter because movies are so subjective, the experience of watching a movie is subjective, and that version of a movie that is left in each of our respective heads after watching (per Benesh) are different enough that it would be hard to have a truly objective standard for what movie is best. In fact, it would be silly to try because the viewing of a film should be subjective, should be personal.

I watch The Room, for example--watching it again right now--and my experience is different from yours. I think we can all agree on two basic truths about this film, though: 1) this might not be the worst film ever made but it is certainly the most... mediocre, feeling far too often like a bad high school play than a film made by actual adults who wanted to be actors; 2) it is still quite watchable and enjoyable. Taking the latter, this might make it onto a list of my favorite films (depending on just how long that list was) but would never come anywhere near my list of the best films.

If I were to create the survey I want, the problem is that I wouldn't want there to be easy answers to some of the most important questions. I want to know not just what is your favorite film but why? Not only what movie do you abhor but why?

Other films that usually make my "favorite" list would be Groundhog Day, obviously; Zero Effect; Adaptation. (908 909 910); Hedwig and the Angry Inch (647 648 649 650 651 652 653); The Princess Bride; and I could go on, but if you actually care, I hope you're clicking on each of those links and you've got a lot of reading to do. If you don't care, then I'm just indulging my narcissism and pretending that my opinions matter more than yours.

(For the record, again, this is my blog, so here my opinions matter a lot more than yours do. If you want to express yours, though, go for it. Comment below, or on Twitter or Facebook. This blog could use more regular comments. Even my old standby, Maolsheachlann, seems to have mostly disappeared.)

The thing is, I want your opinions. People who see films differently than I do fascinate me sometimes. And, I wish I had the time to talk about it. I imagined an iteration of my After the Film YouTube reviews in which I actually talked to random people coming out the same movies as me, finding those unexpected opinions... But, of course, I'm socially awkward, and not that great one-on-one, especially with strangers. So, that was never going to happen. Or I watch Red Letter Media videos on YouTube where they sit around and watch bad movies and drink, and then discuss them after, and I wish my friends would be as excited about doing something like that as I would be. I think the real problem is that I literally know no one who sees as many movies as I do.

Which actually circles me back into The Room, because I'm wondering, why the hell are Johnny and Mark friends? How did they ever meet, let alone become friends? Now, Tommy Wiseau and Greg Sestero met because of acting class. But, I just don't see Mark and Johnny traveling in the same circle if they live in the same apartment building. Then again, considering Wiseau's followup series, Neighbors (which, alas, is no longer on Hulu) suggests that Wiseau sees neighbors and friends as kind of the same thing. And, it's a nice idea--that you might be friends with the people who live in your building, but either because I grew up in LA, or because my private school upbringing had me as friends with people who generally lived nowhere near me--or both--I have just never been that person; a few of my neighbors I might say hello to as we pass each other, but other than one family in our building, I don't even know people's names. I prefer even acquaintances to have more depth than just passing. Which makes me really bad at networking, unfortunately...

And, it is really weird to be envious of Johnny. 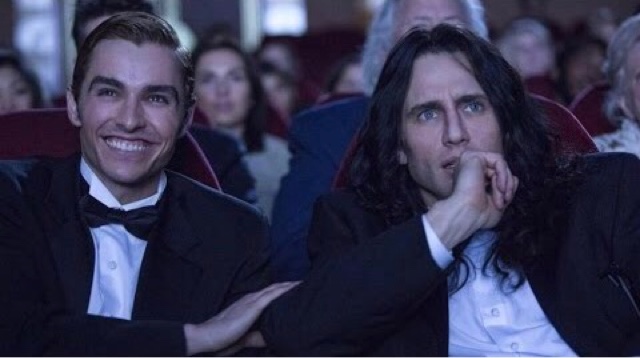 Especially, when he refuses to plan what movie he's going to see. That is just weird. I mean, not that I have never wandered off to a theater and picked a movie when I got there, but that's after I've already seen all the movies I really want to see. That's a backup plan to cure boredom.

And if not for the (bad) script, I'm not sure I could imagine any of these people would be friends with Johnny. Lisa and Michelle, on the other hand--that's more believable.

So, question number one...