you're not happy being sad

Sing Street--and, I think I'm about done with this film, I swear--begins with Conor playing guitar and making up lyrics on the spot, mostly basing them on the phrases he can hear his parents Robert and Penny yelling from downstairs. Then you get a news report about poor folks from Ireland migrating to England to look for something better. Then, Robert and Penny gather their three kids together to announce that they're having money troubles and Conor has to transfer schools. He was going to a Jesuit school but now he's headed to the Christian Brothers (Catholic) school, Synge Street. In passing, we also learn that Brendan has dropped out of college. In the first three minutes, we know so much about what's to come. It's a great example of how to set up the status quo quickly. Conor is a musician. His parents' marriage is coming apart. Brendan is a slacker. And, Conor is headed to a new school. The plot is in motion.

That opening bit with the singing and parents yelling, specifically, though--that one is brilliant because it sets up story beats and sets a mood. Sing Street is a decidedly optimistic film, but it is built on a melancholic foundation. I think this is why I like it so much; I can relate. I'm optimistic, or I try to be; but I am also so very often a cynic and a pessimist. And melancholy is certainly one of my settings.

(Like if you were all watching my version of Inside Out, there wouldn't just be Sadness but also Melancholy, and they would team up sometimes (like last night while I was writing this blog. But there's also Joy, or at least some version of Happiness. And, I think I've got a Dreamer in there. And, my Anger probably sits around in the control room thinking about current politics and the state of the dishes in the kitchen sink...

And, that was an odd tangent.)

Thirteen minutes in, we've met Brother Baxter, we've met Barry, we've met Darren, and now we meet Raphina. In the next few minutes, we'll meet everyone else that matters, Eamon and the rest of the band.

And more of that Irish melancholy. Eamon's father is at Saint John of God's, "a place alcoholics go to get off the drink, stop beating up their wives and kids... And neighbors." We already know Conor's parents aren't happy. Barry's parents are drug addicts and we see his father hit him. Raphina has no parents, and while she is never explicit about what happened with them, it seems that her father abused her sexually (and he was later hit by a car) and her mother was sent to a mental institution. Meanwhile, there's Brother Baxter, whose jobs it is to teach the boys at Synge Street to be good Catholic boys. And, he shoves Conor's face into a sink full of water, and rubs soap on his face as well, to get makeup off of him, and the scene is briefly quite violent and then quite sad.

Twenty minutes in, the band is together, the band is named--Sing Street. Ten minutes later, they shoot their first video--"The Riddle of the Model"--and everything is in place. Well, I suppose there's one more piece, but Raphina's boyfriend is less important to the plot than her dreams of being a model are (and he's introduced just a couple minutes later, anyway.) 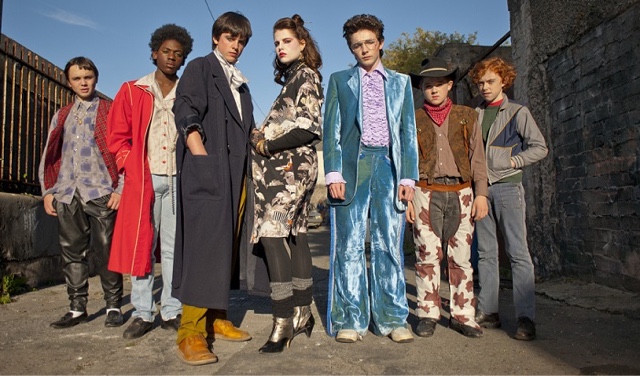 But, what is really great here is not just that Sing Street puts all its pieces together so efficiently, but also that each piece connects to the plot. There are superfluous details, to be sure--like Eamon's rabbits, except even that bit of characterization fits with his friendliness and his eagerness to please. For comparison, I saw 47 Meters Down today, and like last year's shark movie, The Shallows (which I reviewed on YouTube) they throw in some big life moment that's going on right when all this shark business happens. It's unnecessary, it adds very little in The Shallows and adds nothing to 47 Meters Down. But here--here all of these little things add up to a surprisingly cohesive whole. All the abusive or damages parents produce a situation ripe for someone like Brother Baxter to be the asshole that he is. And, it sets Ireland, or at least Dublin, as a place where of course dreams are worth following because all that normal get-married-and-have-kids bullshit clearly isn't working. Why not run away when there's no reason to think staying will amount to anything?