"Nearly everything predicted in Idiocracy has come true, and more," writes Joel Stein in Time, 11 May 2016. Stein talked to Mike Judge, director and co-writer of the film. "I'm no prophet," Judge said, "I was off by 490 years." i.e. This stuff is already happening. Judge called writing the film, "following your id. Now unfortunately our id has become our [then] candidate for president." Now, of course, that id has become president, politics has devolved to Twitter exchanges, insults, right and left backing further away from one another. It would be a bit like the British parliament, with the way they go at each other, except it's not as clever and hardly ever fun. At least half of this country has become Idiocracy.

Of course, someone on the right is going to say it's the left that has turned so stupid, and it's time to unite.

Someone on the left is going to say it's the right.

It's hard to imagine that part of it getting much better. The best we can hope for us maybe a tiny push in, you know, whichever direction is our political choice, and maybe the world will seem slightly better in the long run. Short term, though, we can just call each other names, dismiss each other's views, and tuck ourselves away in whatever safe corners we can find. 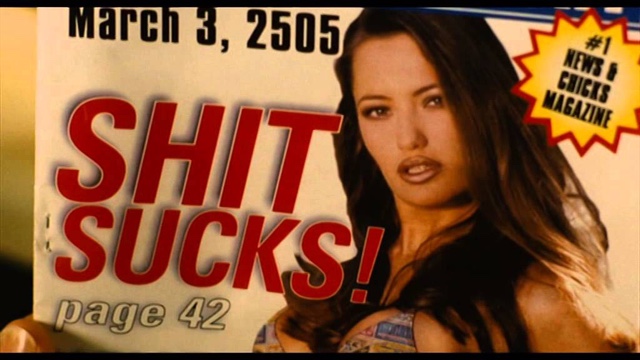 We're frustrated by the world, believing that encouraging smarter people to breed would somehow fix our problems. But it simply isn't so. It's a distraction from the institutional problems of our society. The problem isn't that stupid people (again, read: poor) are having too many children. The problem is that we aren't living up to the ideals and promises we've given to each generation of Americans that have come before us. A livable wage, paid maternity leave, proper funding of scientific research--these are the things a functional, civilized society are built upon; the ways we can improve the world. We don't build a better society by getting more smart people to fuck each other.

Except, 1) the film does not explicitly divide rich and poor; though it does code Trevor and Carol as financially successful, privileged enough to decide not to have kids, while Clevon and Trish are coded as uneducated rednecks, the assumption that they're poor seems more a problem in the assumption than the execution (or at least a preexisting problem the film uses rather than creates). 2) We have not promised each generation of Americans a living wage or paid maternity leave, or proper funding of scientific research. For most of American history, we have had no, or virtually no, funding for scientific research, or we had no scientific research. For most of American history, we have assumed that a woman's place was in the home, taking care of her kids (and she would have kids), maternity leave was not an item for discussion. And, a living wage? One of our oft-referenced (in name or in spirit) American ideals is that you pick your damn self up by your own bootstraps, work for the things you need, Protestant Work Ethic and all that, because you are not anyone else's problem but your own... Unless you're a child, then for at least a few years, before you're big enough to be put to work in a factory, you are your parents' problem. And, if you're a woman, you shift from being your parents' problem to being your husband's problem. And it's all heteronormative, so anything that might suggest it's not just one man and one woman getting together to procreate so we have more little Americans--that's just not getting discussed through most of American history. 3) Sure, we don't build a better society by getting more smart people to fuck each other. But, if we actually got dumber people to not breed, that would actually create something better, eventually. But, even better, if we got more of the people that were breeding to actually be smarter, that would definitely get us something better. That is, make more smarter people. Not by making smart people breed, because a) there's no guarantee and b) forcing that kind of thing in a society (basically, eugenics) is wrong. Instead, educate more people, make more people smart. And, educate the next generation and the next. The flaw in the opening narration (and that couples comparison bit) is that it isn't about natural selection anymore. Nature isn't valuing dumber people. We are. It is artificial selection. And, we like it that way. We have a president who thinks exercise is bad for you, for fuck's sake. A guy who doesn't trust vaccines despite, you know, scientific evidence. A guy who can barely get through a sentence without at least two tangents, and that's if he makes it through the sentence at all. The eugenics implication in that opening Idiocracy sequence is bad. But, the reality that we keep comparing to the future within this film is worse. "Is Mike Judge really saying That some people should breed and others shouldn't?" asks Reihan Salam in a Slate, 29 September 2006 review of the film. "Well, sort of," he answers, "But, he's also taking on the laziness and the self-absorption, and the materialism and the willful ignorance, of his own audience." He continues, with an interesting comparison to other films:

Watch Dogville or Fahrentheit 9/11 or even The Passion of the Christ and you get the distinct sense that you're being congratulated for believing the right things. Rare is the movie that challenges your believes. Rarer still is the movie that tells you you're a fat moron, and that you should be ashamed of yourself.

Personally, I've got no problem with the idea of telling certain people that they shouldn't breed. It's when you start preventing them by force from ignoring your pronouncement that I've got a problem. Plus, the initial choice of who should or shouldn't breed--most of the time, we're too damn stupid already, or too damn bigoted for no good reason, and we're telling people not to breed because they're not even human, because their lifestyle choices are against your beliefs, your religion, your politics, so fuck them, fuck their lifestyle, me and mine are right, will always be right, and we deserve to be in charge.

Back me in a corner and I'll at times go with the fuck them attitude too. It's easy. What is hard to getting past differences to get along. And, in the meantime, I try to do my best for those around me. My family. My friends. My students. I teach communication because I think everyone should have a voice, and know how to use it to get their views into the world. But that doesn't mean every idea needs to last, of course. We had a discussion in class last semester about the difference between respecting everybody's opinion and listening to everybody's opinion. If your ideas are going to damage the world, I don't have to respect them. I don't have to respect you. Nor do you have to respect me.

But, hey, listening is cool.